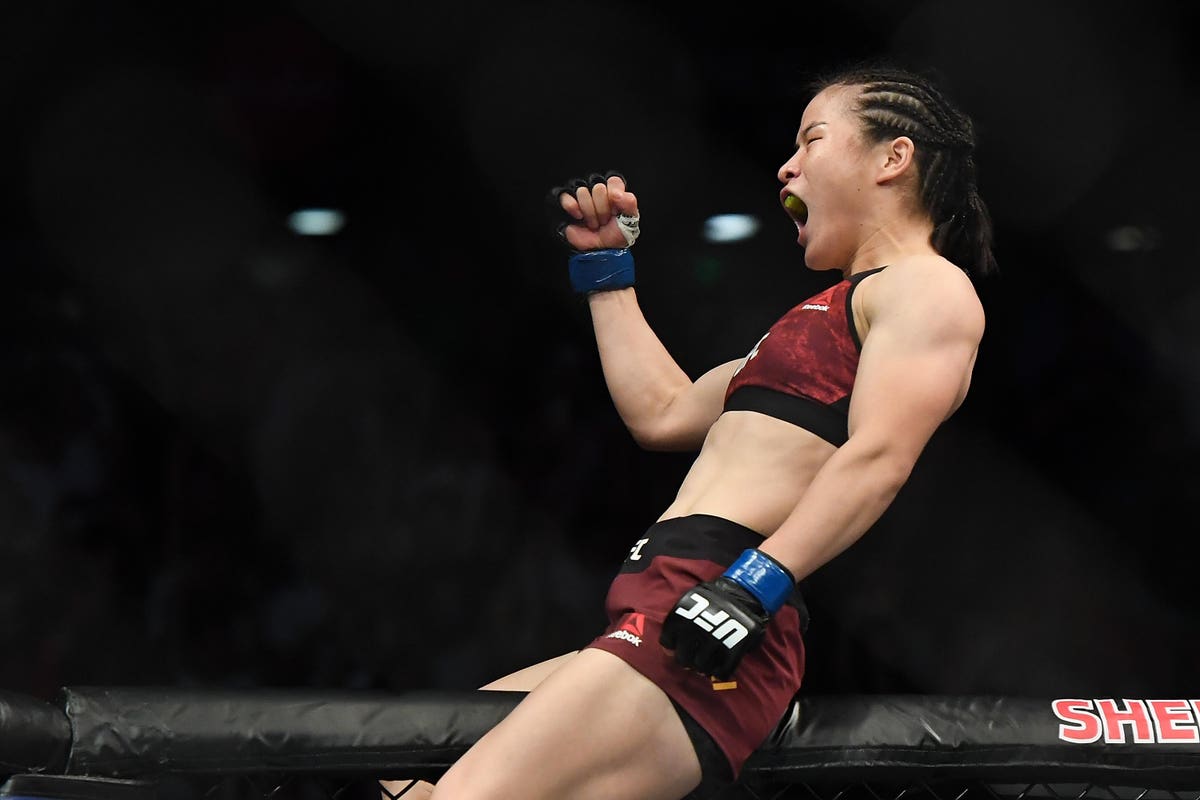 China fans of the Ultimate Fighting Championship, the world’s mixed martial arts (MMA) leader, were saddened this month when national favorite and one-time UFC Strawweight World Champion Zhang Weili lost a rematch to Rose Namajunas, the American who took her crown in April with a head kick in the first round. UFC and MMA aren’t for the lighthearted.

UFC, owned by Hollywood entertainment business Endeavor Group, remains upbeat about expansion in China, Asia and the rollout of 5G in general.  In March, it launched a partnership with Migu, a unit of China Mobile, China’s biggest mobile phone service provider and a global 5G leader. Other partnerships beginning in October 2021 include PCCW in Hong Kong; Mola in Indonesia, Malaysia and Singapore; Astro and Telekom in Malaysia; Canal+ in Myanmar; Singtel and StarHub in Singapore; Tap DMV in the Philippines; TrueVisions in Thailand and Cambodia; and VSTV in Vietnam. The new partners will broadcast 42 live UFC events, including 12 pay-per-view events and 30 UFC Fight Night events, along with other content。

Those country-by-country tie-ups in culturally diverse Asia allow Endeavor to provide localized stories and better expand its audience globally.   Growth in Asia has helped UFC to reach nearly 1 billion households across 175 territories worldwide, and increase its fan base to more than 625 million. The company has a global roster of athletes representing 75 countries; UFC fighter Conor McGregor topped the 2021 Forbes ranking of the world’s highest-paid athletes with total earnings of $180 million. Good prospects helped UFC parent Endeavor, which also owns the William Morris Endeavor talent agency and Miss Universe Competition, go public at the New York Stock Exchange in April. Its shares closed at $27.60 on Friday, up from their $24 IPO price.

To learn more about what’s next for UFC in Asia, I spoke in Shanghai this week to UFC Senior Vice President Kevin Chang, the executive in charge of the company’s business in the region.  He also oversees the UFC Performance Institute opened here in Shanghai in 2019.  Asia, according to the Hawaii native, is “more important than ever” and China is the most important market in the region for UFC’s expansion.  Excerpts follow.

Flannery: How does Asia fit into UFC’s business today?

Chang:  It’s more important than ever. When you look at how this sport has grown, we have some very mature markets where (there’s) mainstream sport already – the U.S., Brazil, Canada and parts of Europe. Asia is that next frontier for us. China, in particular, is the most important market for international expansion for the UFC. We’ve been fortunate enough that we’re truly a global sport. Soccer and MMA are two truly global sports.

If you look at our roster, over 50% is coming from outside of the U.S.; it’s truly global. Our champions are coming from all over the world:  Russia, Brazil, China — with former champion Zhang Weili, Canada, Australia, and the U.S., of course. That’s what really makes our fan base truly global.

And so for us, looking at Asia, looking at the talent pool out here, the potential to groom that talent with what we’re doing with Performance Institute, and some of these other things — that’s a really exciting prospect for us and somewhere the company has invested the time, the resources and the capital to make it happen.

Flannery: “Asia” is one word, but of course its cultures are so diverse. How important is localization?

Chang: Extremely important. I don’t think just in Asia; globally that’s what we try to do — whether that’s on social media or television content, what have you.  We of course have standards — like there is a global standard for (UFC) events. If you go to an event in Russia, the U.S. or China, that format, that feel, that style is going to be largely very similar.

When I talk about localization, it’s not just local language, which is a big piece of it — having that Cantonese commentary, Thai commentary, or Chinese commentary. That’s all very important, but it’s also platform specific.

So take China as an example. You have so many different social media platforms. You look at Weibo, you look at Douyin, you look at Bilibili and Kuaishou, for instance. Those are very, very different as far as the type of content that you need to make for those. Is it a longer piece, in-depth documentary style? Is it a shorter piece (that’s a) seven-second clip set to music? Is there humor in it? Is there not? Right, all of the kind of things the subject matter of each of these things matter as well.

So when we look at localization, we’re really looking at that whole picture.  Local languages — paramount, of course, very key. But to make it locally relevant, it depends on a number of different factors.

Flannery: In China, you’re working with Migu. How’d that happen, and what are some of the things you’re doing there?

Chang: We’re really happy and feel very fortunate to be working with, in our opinion, a best-in-class partner who has in a very short amount of time become the leader in sports in China.

And that’s where we want to be. When you look at the UFC and the platform and media partnerships that we have around the world, whether ESPN in the U.S. or Migu out here in China, we look to be among the best sports brands in the world.

So for them, in their recent kind of foray into sports — very quickly, the Olympics, the FIFA World Cup, the NBA, the CBA (Chinese Basketball Association) — all (partners) are the most major sports in all of China. And for us, we wanted to be among those sports.

We started that conversation, and our partnership ballooned into something more collaborative than just the media rights. The media rights are a very important piece of it. People want to watch the live events. They want to watch that localized content that we’re just talking about. But we also have this ability to branch into health and fitness,

and youth-type of programming, given the fact that we’ve built this Performance Institute and given the fact that we are leaders in the high-performance industry. We have a partnership with the Chinese Olympic Committee, we train Olympians, and we have this expertise. Health and fitness are becoming very important topic for China as a whole, and we’re able to leverage a lot of that knowledge, skill, and know-how into these other areas. So it’s a collaborative effort between our two companies, and probably the most holistic partnership that we’ve done as a company.

Flannery: You’re the initiator behind the Performance Institute in Shanghai. What’d you hope to accomplish, and how’s it going?

Chang: The thesis and what drives our sport – and this ties into local relevance piece – is the local athletes, the local heroes, the Zhang Weilis.  And we wanted to develop and invest in that pipeline for talent. So the Performance Institute first and foremost important is about that:  how do we have a facility — a world class facility (that’s) best in class, put together a world class team, take that know-how we started in Las Vegas, (and bring to) the Performance Institute here (in Shanghai)? And then it also, of course, serves a variety of different purposes.

So for us, that piece of it accelerates the development of mixed martial arts talent — very important. But really what we aim to do is raise the bar on sports in China and in Asia as well, because there’s not a lot of these facilities, know-how or this type of expertise out here.

And then on top of that, we, certainly as all of us are, are a content company. So we purpose-built this facility for content. Whether that’s live content or day-to-day digital content for social, we have a full editing suite.  We have a full team of content creators within our building. That’s something that’s very important as well. It serves as the hub of our Asian operations, whether that’s bringing in the media, whether that’s bringing in sponsors, doing hospitality and that sort of thing, and then we also open it up for fans. It’s a very authentic touch point for a fan to learn about the UFC, learn about how an athlete trains, how (athletes) come from their start all the way into the UFC.

Flannery: Tough loss for Zhang Weili this month. What’s ahead for her now?

Chang: I think it is a tough loss. It was a very close decision – a split decision, actually. And what we’ve seen and the reaction from the fans is just an outpouring of support. To see her come back from her last lose to Rose, who’s the best in the world, and her track record, speaks for itself. But then you look at the improvements that Zhang Weili made to her game, the efforts that she took training both here at the Performance Institute and back in the States with Henry Cejudo, really upped her game to that level that she was right there with very best in the world. I think that, for us, what’s next for her is she’s going work her way back. We have the full faith in confidence that she’ll be able to do that.

Flannery: AR-VR is starting to change entertainment in a more concrete way and morphing itself into the metaverse. How do you think that is going to impact sports in general and MMA in the coming years?

Chang: There are a lot of great things content-wise and live-event-experience wise that we’re really looking (at), and it’s a big key for our partner as well. Migu is a subsidiary of China Mobile is one of the leaders in 5G rollout in all of China. Really, what we’re looking at is how do we leverage and showcase the 5G technologies that our partner

really is very important for our partner. You have 5G on your phone (and) that’s great, but really what you need is the content to show it off.

And so for us, that’s what we’re focusing on, whether it’s bullet-time technology, whether that’s AR, whether it’s virtual reality. We’re working on things like avatars, to virtual idols and those sorts of things. We’re working on live event experiences as well. There’s a myriad of different things that we can utilize 5G with, whether that’s real-time scoring or stats, or those types of things, to give that second screen a live event experience that you really need that 5G power behind it to do. Those are the kind of things that we have in the works right now, with the thought of implementing when we can.

I expect mortgage rates to rise modestly in December, especially toward the end of the month. As we approach the end of 2021, bond traders will cash … END_OF_DOCUMENT_TOKEN_TO_BE_REPLACED