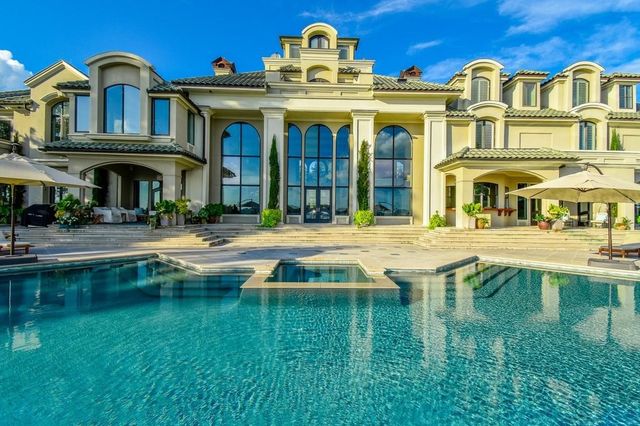 Alabama’s most expensive mansion is a lakefront home with a bit of a history.

Now on the market for $10.5 million, the huge estate includes a 15,695-square-foot residence and straddles multiple lots on Willows End on the shores of Lake Martin in Alexander City, AL.

The asking price represents a $2.6 million increase on the price tag on the home when it was listed in August 2020 at $7.9 million.

The house was reported to cost $17.8 million to build back in 1998. The three-story structure has an elaborate entry, with a winding staircase leading up to an area that overlooks the main floor below.

It boasts 10 bedrooms—eight in the main house and two more above the boathouse. There are also 10 full bathrooms and six half-bathrooms.

High-end entertainment options abound, with a gym, a bar, and a game room with a pool table and a mini-kitchen.

The main kitchen features luxe appliances, a dining area, and a large fireplace. It sits close to the formal dining room—which is surrounded by windows, to allow diners to partake in lake views while enjoying a meal.

A commercial-sized elevator shuttles residents between the home’s three floors, and there’s a four-car garage for storage.

Outside, you’ll find a large pool and outdoor patio area with plenty of space, all designed to enjoy the lake views.

The detached boathouse can easily accommodate two large boats and has living quarters above it. For aquatic-minded buyers, there’s another dock, plus a boat ramp.

Birmingham’s HealthSouth Corporation, for whom the home was originally built.

Scrushy ran afoul of the law a couple of decades ago and faced charges of accounting fraud while running the company he founded. In 2005, he was acquitted of several charges of creative accounting at trial.

Along with former Alabama Gov. Don Siegelman, Scrushy was eventually convicted on bribery, extortion, and mail fraud charges at a different trial in June 2006.

He also settled several civil charges without admitting guilt and served time in federal prison. He was released in July 2012.

Part of the civil settlement for the fraud cases involved a large restitution settlement. The sale of this house at auction in 2009 for $7.4 million went toward that settlement. The current residents have owned the luxury property since 2012.

The listing agent is India Davis with Lake Martin Realty.

President Biden’s climate envoy, John Kerry, was set to arrive in China on Wednesday, the first Biden administration official to visit the country at … END_OF_DOCUMENT_TOKEN_TO_BE_REPLACED

The New York Botanical Garden, the Children’s Museum of Indianapolis and the Judd Foundation in Marfa, Texas, are among 225 beneficiaries of new … END_OF_DOCUMENT_TOKEN_TO_BE_REPLACED