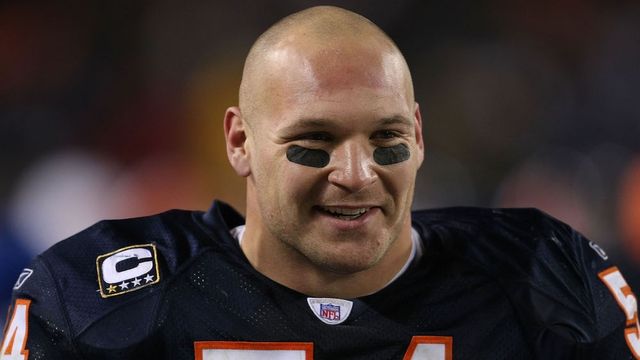 The eight-time Pro Bowler purchased the brand-new property in 2014 for $780,000. He and his wife, Jennipher Frost, a former contestant on “America’s Next Top Model,” are now ready to move on from the high-end home.

In a 2015 YouTube video for the home builder, the ex-linebacker called the home “the nicest house I’ve ever been in.”

The 5,400-square-foot layout features a family room with an elaborate, coffered ceiling, and a wall of glass that opens outside. Just adjacent, the gourmet kitchen comes with Sub-Zero and Wolf appliances, custom cabinetry, granite counters, and an oversized island with breakfast bar. Next to the kitchen, you’ll find a formal dining room topped with a chandelier.

The owner’s retreat is graced with a beamed ceiling, a private entrance, and an en suite bathroom with a freestanding tub, shower, dual vanities and spacious walk-in closet.

Other perks of the home include a gym, as well as a separate one-bedroom guesthouse with a lounge area and a kitchenette.

Set on 1 acre, the outstanding backyard is designed for fun in the sun. The pool includes a slide, basketball hoop, and spa, and is also enjoyed by the family dog.

For al fresco feasts, you can whip up a meal at the built-in barbecue, and relax or dine on the covered patio.

With its lush landscaping, the place also comes with a four-car garage, plus an RV gate.

The 7,000 square-foot home went up for sale in 2017. A 9-acre horse property about 40 minutes outside Chicago with a pond and two barns, it initially hit the market for $3 million. No buyers surfaced, and the Chicago Bears great slashed the ask to $2 million in 2018.

Over the years, with no takers, the price continued to be discounted, until the home last came on the market for $1.6 million. That appears to be the right amount, as it’s now in contingency status. However, the owner will be taking a hit. He bought the spread in 2004 for $2.3 million.

Urlacher spent his entire career with the Chicago Bears. The popular and talented linebacker was a four-time All-Pro and won the NFL Defensive Player of the Year award in 2005.

After his 13-season career with the Bears, he announced his retirement in 2013. He has since been inducted into the Football Hall of Fame. Now 42, the retired player briefly worked as an analyst for Fox Sports 1.

KRASNIK, Poland — When local councilors adopted a resolution two years ago declaring their small town in southeastern Poland “free of L.G.B.T.,” the … END_OF_DOCUMENT_TOKEN_TO_BE_REPLACED