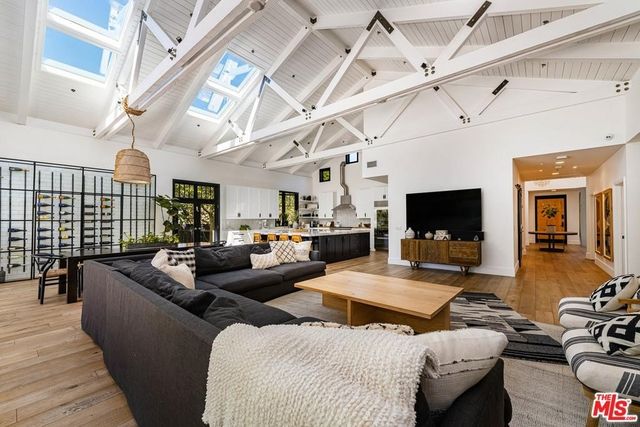 Christina Haack is moving on—not only from her second husband, Ant Anstead, but from the house they lived in together.

Last September, you may recall that the star of “Christina on the Coast” announced her divorce from Anstead after a mere 21 months of marriage. And now, reports have surfaced that she’s also ditching the Newport Beach mansion they resided in and renovated together.

The price for this 4,800-square-foot, five-bedroom abode? A cool $6 million—an astonishing profit, given that Haack had bought the house just three years earlier for $4.1 million.

While many divorced couples must sell their property in order to split the proceeds, that may not actually be necessary in Haack’s case. According to property records, this house is solely owned by her, under her previous name, Christina El Moussa.

Haack had also bought this house in June 2018, six months before she married Anstead in December of that year—further solidifying her sole claim on the property.

So if she doesn’t have to sell, why is she selling it?

Why Christina Haack may be selling her house

Even though Haack’s name is the only one on the deed, this doesn’t necessarily mean Anstead doesn’t have a claim on the home they shared during their marriage.

“In California, as a community property state, most of the time, assets get split right down the middle,” says Tyler Drew, a California developer at Anubis Properties.

“I would think Anstead may be entitled to something, as he was involved and did put sweat equity into the house,” says Cara Ameer, a real estate agent with Coldwell Banker in Los Angeles. “Especially that light fixture in the master bedroom! That was an Ant special.”

Although they weren’t married at the time Haack bought the house, they were certainly dating.

“They were both involved with buying this home as they were forming their new life together,” Ameer adds. “All was documented on her show. They were seen house hunting together. Their ‘surprise wedding’ was in the backyard, plus they had a third child when there. Hard to separate all that and claim this was just her house.”

In retrospect, Ameer theorizes, “He was probably too nice in not insisting [his name] go on the title.”

The odds are that he will get a cut of this sale.

“Perhaps this all got worked out as part of the divorce settlement, what he would be getting,” Ameer says. “I don’t think he’s going to walk away and get nothing.”

Another reason for Haack to sell: The memories

Some people theorize that Haack’s reasons for listing this house after the divorce may stem from the memories it holds.

“I’m sure this house reminds her of her life with Anstead, since they oversaw all of the renovations together,” says Ameer.

Apparently history is repeating itself. Back in 2018, soon after Haack and her former husband, Tarek El Moussa, divorced, they sold the Yorba Linda, CA, family house they owned together. This suggests that when her relationships crumble, Haack prefers to start afresh on the home front.

“Given her knack for renovation and design, I’m sure she’s excited to look for her next project to reflect the current phase of her life right now,” says Ameer.

According to a report from TMZ, Haack is apparently hoping her new place will be closer to the coast, with ocean views—which shouldn’t be hard to do with her sizable budget.

How much will Christina Haack’s home sell for?

While the property listing does not mention Haack by name, it does say, “A once in a lifetime opportunity to own a fully realized & furnished vision by an HGTV celebrity.”

As such, according to Ameer, the $6 million price tag is right on the money. She says it is likely to result in multiple offers and will probably sell for over asking.

“The listing language clearly leans on Christina’s notoriety, which isn’t a bad thing, and the intangible celebrity factor will definitely boost the home’s value right out of the gate,” Ameer says.

LONDON — A nightmarish tale of a Senegalese soldier fighting for France in World War I, and a workplace novel set on a spaceship, are among the six … END_OF_DOCUMENT_TOKEN_TO_BE_REPLACED

In 2020, when the world suddenly ground to a halt, most people postponed or canceled all of their plans due to the coronavirus crisis. Many … END_OF_DOCUMENT_TOKEN_TO_BE_REPLACED