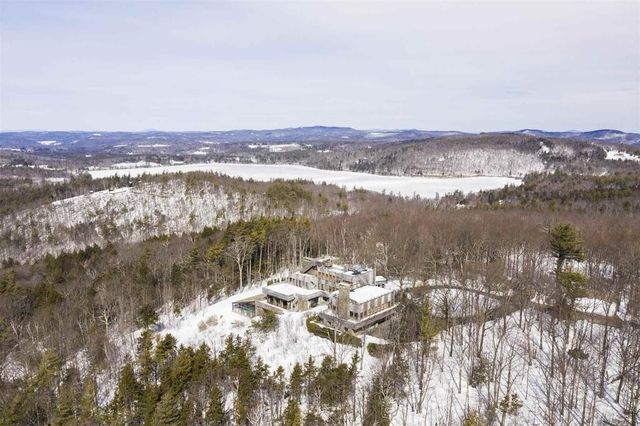 A midcentury masterpiece sits alone on a private mountaintop in Dublin, NH. And when we say alone, we mean it.

Built in 1960, the secluded house on Lake Road has had a single owner for the past 38 years, and the man who built it, Ray Winfield Smith, never lived in it.

“It was the brainchild of a really interesting owner, who was an Egyptologist affiliated with Dartmouth College,” says the listing agent, Michelle Carter, referring to Smith.

The home was built to house Smith’s collection of Egyptian artifacts, but after it was completed, Smith went back into military service, and it’s not clear whether he ever moved into the house.

He eventually donated the property to Dartmouth (the Ivy League school is about 80 miles north), which sold it to the current owners.

Listed for $3.65 million, the home, known as Oak Hill, is almost 9,500 square feet, and sits on almost 95 acres in the southern part of the Granite State.

Carter told us about the first time she saw the home in person.

“It feels just like you’re getting in on a really good secret,” she says. “I’ve lived in the area for 30 years, and I’ve driven past that gate a million times and wondered what was out there. I was really blown away the first time I was up there.”

One reason she’d never seen it before? There are about 40 acres of land between the home and its gate.

“I just don’t know how you can find a more private place,” Carter says. “You could probably find something with more land, but the privacy that this property allows—by its elevation, by the fact it abuts the state forest… And the neighbors are not close. If you really value your privacy, this is an incredible property.”

While 95 acres affords plenty of privacy, there’s even more seclusion. The house abuts on 5,000 acres of state forest preserve.

The huge house has a total of 20 rooms, including five bedrooms and seven bathrooms.

“All of the best materials were used while building. The exterior is pecky cypress, which is a really hard material that weathers extremely well,” Carter says. “The floors are all stone, and all of the paneling is mahogany.”

The current owners built an addition to the house in the 1980s, which included a master bedroom with a bathroom clad in marble that the owners imported from Italy.

“It’s very elaborate. No expense or detail was spared,” the agent says. “All of the fixtures in the bathroom are gold-plated.”

Then there are the views of Mount Monadnock, Dublin Lake, and the Grand Monadnock reserve.

“The views are just spectacular from every room,” Carter explains. “There are 360-degree views. And I don’t even know how many square feet of decks there are, because there are decks everywhere.”

In the early weeks of Covid-19 vaccinations, the shining examples of success were all places with politically conservative leaders. Globally, the … END_OF_DOCUMENT_TOKEN_TO_BE_REPLACED