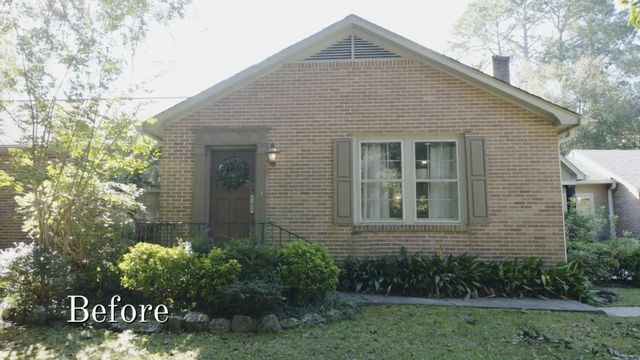 “Home Town” stars Ben and Erin Napier are known for making old homes look new without blowing their budget. And in the latest episode, they prove that even the tiniest tweaks can make a huge difference.

In the Season 5 episode “Thanks for the Memories,” Erin and Ben meet up with Laurel, MS, locals Robby and Angie Scruggs. After raising two kids, these soon-to-be empty nesters want to fix up their family home for the next chapter of their lives. With Erin and Ben’s help, they’re hoping to turn this dated family house into a stylish home ideal for entertaining.

The Napiers end up spending $80,000 on this renovation, which goes a long way toward overhauling this home’s look. Here’s what they home in on and why, which proves that, sometimes, less is more when making over a house.

Ben and Erin know that this house doesn’t need a full renovation, just a few thoughtful updates, like a new front door.

They remove the old wood door and replace it with a new one with large glass windows. The style looks more contemporary, updating the home’s entire look from the outside, and it brightens the inside of the home.

“I didn’t think about it at first, but it really lets a lot of light into the foyer there,” Ben says.

2. Change the fireplace frame for an easy makeover

When Robby and Angie bought their house, it came with ornate finishes that didn’t match their relaxed style. This includes a grand fireplace, which has a lot of piping and detailing. Erin and Ben simplify this fireplace by removing some parts of the frame and replacing them with a simpler style.

“This is essentially what we’re doing with their house, is taking the super-formal, elegant fanciness and then dressing it down,” Ben says.

The project is quick and easy, switching out pieces of the frame with new wood. It’s a quick update that makes a huge difference.

3. Use reclaimed wood accents to frame a space

To update this home, Erin and Ben bust down a wall, opening the space between the kitchen and dining room. While the new open floor plan looks great already, Erin and Ben come up with a plan to add some extra style by installing a reclaimed wood accent in this throughway.

“Angie likes really light and bright spaces and lots of wood accents. So we wanted to give her that in that opening between kitchen and dining room with the natural wood all the way around the opening,” Erin says.

With different colors and thickness, the reclaimed wood takes extra work to make it all fit together, but the imperfections give the home extra character.

“The problem with reclaimed wood is that it’s not perfect, it’s not uniform,” Ben says. “That’s what makes it special, but also what makes it unpredictable.”

LONDON — A nightmarish tale of a Senegalese soldier fighting for France in World War I, and a workplace novel set on a spaceship, are among the six … END_OF_DOCUMENT_TOKEN_TO_BE_REPLACED

In 2020, when the world suddenly ground to a halt, most people postponed or canceled all of their plans due to the coronavirus crisis. Many … END_OF_DOCUMENT_TOKEN_TO_BE_REPLACED