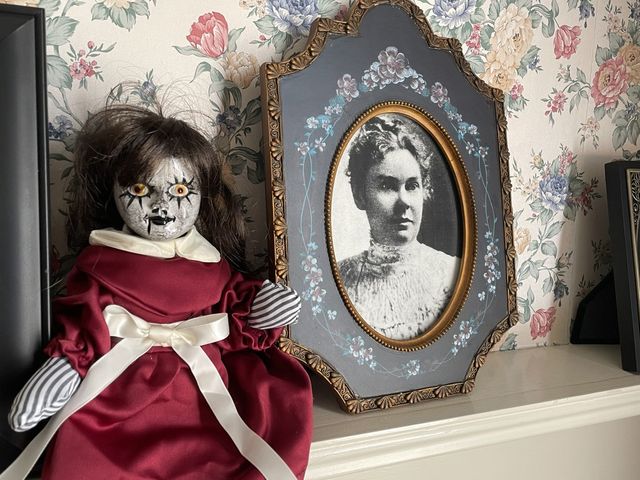 Lily is a haunted doll and the creation of Lance Zaal, the soon-to-be owner of the Lizzie Borden House in Fall River, MA.

The infamous residence landed on the market in January for $2 million. Lily (along with Zaal) had the chance to visit, and they liked what they saw—because Zaal made an offer on the Borden home and has been approved for business licenses.

“It’s not official yet. We still have to go through closing,” Zaal says. “It’s certainly a process. We’re buying the property as well as the business.”

The business he’ll acquire if the deal goes through is the Lizzie Borden Bed and Breakfast, a place for travelers with a taste for odd lodging choices. The inn is where two notorious murders took place back on Aug. 4, 1892.

On that day, Andrew Borden and his second wife, Abby Borden, were brutally murdered in this home. Andrew’s daughter, Lizzie, was accused of committing the gruesome crime with an ax, but was acquitted of the murders at her trial in 1893.

Lizzie and her sister, Emma, lived in nearby Maplecroft after the trials in 1893, until the two had a fight in 1905 and never saw each other again. Maplecroft isn’t part of this deal, and is still available for $890,000.

Suzanne St. John is the listing agent on that property, and was the agent for the B&B as well. She’s also a longtime tour guide at the Lizzie Borden House.

The B&B has been operating since the late 1990s, both for overnight stays and tours, and will continue under the new ownership, with a few changes.

“We’ll be adding several different events for both visitors and locals. We want this to be a place where people can kind of come in just to have a good time as well,” Zaal says. “We really want to give more people a reason to go there—so more activities and more events.”

“I would like to have ax throwing in the mix—just a couple of ax-throwing lanes, which would be a lot of fun,” Zaal says, acknowledging the irony of using axes for entertainment on the property. “We’re going to look at producing an official Lizzie Borden Ax—that we will provide for ax throwing, and also to sell to guests.”

The gift shop is also part of the property, and Lily will probably have a prominent place on the store’s shelves.

And don’t fret if you can’t make it to Massachusetts—some planned events and tours will be virtual, to allow people to experience the legend of Lizzie online.

Zaal was interested in ghosts and spirits from an early age.

“I mean I think I’ve always been interested in it. I had an experience when I was a kid, both alone and then with my mom, that was pretty crazy. I’ve kind of been aware that there are weird, unexplained things,” he says.

He operates US Ghost Adventures, which offers ghost tours in roughly 35 places around the country. As part of the celebration of the acquisition of the Borden House, the company will offer anyone who books a tour with a special promo code a chance to win a stay at the B&B once the sale is complete.

Zaal’s interest is in the history of ghoulish activity, not in explaining the paranormal with a lot of high-tech equipment and investigations, in the style popularized on today’s reality TV ghost shows.

This will be the first B&B in his portfolio.

“We usually don’t buy other businesses,” he notes. “We usually just start things from scratch, but I think this was an exception. This is a great opportunity to have a physical location with some history.”

Zaal says he plans to retain all of the dedicated staff who work at the Borden Bed and Breakfast and potentially add some new hires.

LONDON — “Nomadland,” Chloé Zhao’s film about a woman forced to join the rising numbers of Americans living out of vans as they search for work, was … END_OF_DOCUMENT_TOKEN_TO_BE_REPLACED

Gov. Greg Abbott of Texas may have been overly optimistic on Sunday when he said on Fox News that his state could be “very close” to herd immunity — … END_OF_DOCUMENT_TOKEN_TO_BE_REPLACED