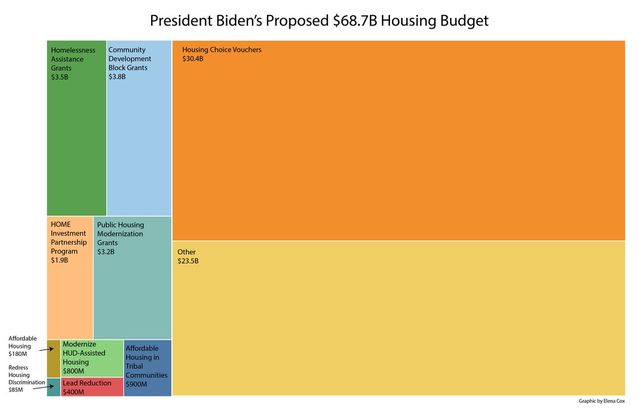 President Joe Biden appears determined to make good on his campaign pledge to bolster the supply of affordable homes by directing more federal dollars toward housing.

After four years of his predecessor’s attempts to take a hatchet to the budget of the U.S. Department of Housing and Urban Development, Biden seeks to increase HUD’s funding by 15.1%, to $68.7 billion, in his first budget proposal. The money would go toward assisting low-income renters and increasing the availability of lower-cost homes.

“President Biden’s [budget request] turns the page on years of inadequate and harmful spending requests and instead empowers HUD to meet the housing needs of families and communities across the country,” HUD Secretary Marcia L. Fudge said in a statement. “I look forward to working with the president to advance HUD’s critical priorities.”

While the president’s goals are ambitious, the $1.52 trillion partial budget released on Friday must first receive congressional approval. The full budget is expected to be released later this spring.

The HUD funding, if it comes through, would be in addition to the $27.4 billion that was in this year’s pandemic relief package. The president’s yet-to-be-approved infrastructure plan also sets aside $213 billion to preserve, retrofit, and create more than 2 million affordable housing units for low- and middle-income Americans.

“The increase in HUD’s budget represents a wish list of things the president wants to implement. It’s also an acknowledgement of the harsh realities facing America’s families today,” says realtor.com® Senior Economist George Ratiu. “For today’s buyers, homeownership is moving further out of reach because of steep prices and rising mortgage rates. Access to affordable housing that allows a family to move up the ladder is also sorely lacking.”

However, some housing experts are skeptical that this budget, even with the big funding boost, can tackle the severe shortage of housing and affordability issues that are plaguing each corner of the nation.

“In the past when we’ve had similar efforts, how really successful have we been?” asked Jim Gaines, an economist at Texas A&M University’s Real Estate Research Center in College Station. He pointed out that only a relatively small number of people in the country stand to benefit from the budget increases. “But it sure beats not doing anything.”

Affordable housing is one of President Biden’s priorities

For years, the nation has suffered from a severe shortage of affordably priced housing, a problem that has worsened drastically during the pandemic. The president plans to address the issue by spending $1.9 billion, a $500 million increase, on constructing and rehabilitating more reasonably priced rental homes. This includes $180 million to put up 2,000 new units for affordable housing for the elderly and disabled.

“That’s great,” says Gaines. “But when you get down the number of homes that are going to get the benefit of this and then spread it geographically across the United States, the impact is going to be on a relatively small number of housing units.”

More low-income renters and the homeless would receive assistance

The president hopes to offer housing vouchers to help an additional 200,000 low-income families pay rent. Priority would go to the homeless and victims of domestic violence.

Currently, about 2.3 million renters rely on housing choice vouchers to afford a roof over their head. The budget calls for $30.4 billion to be added to the voucher program to fund those additional families.

The president also plans to make it easier for lower-income families of color to move into neighborhoods that offer more opportunities, such as better schools or more access to public transportation and jobs.

“Unfortunately, the ZIP code you’re born into has an impact on your life expectancy, the kind of education you’re going to get, the food that’s available to you,” says Pam Kisch, executive director of the Fair Housing Center of Southeast & Mid Michigan. “Giving people more choices is always a good idea. But it’s also important to make every neighborhood in the United States a neighborhood of opportunity.”

Biden would also attempt to lift more than 100,000 families out of homelessness. The president is aiming for a $500 million increase in homeless assistance grants to move people into stable housing as well as to help prevent homelessness.

Good morning and happy Mother’s Day. (Hi, mom!) Here’s the news you need to know for the week ahead in business and tech. — Charlotte … END_OF_DOCUMENT_TOKEN_TO_BE_REPLACED

HANOVER, N.H. — Sirey Zhang, a first-year student at Dartmouth’s Geisel School of Medicine, was on spring break in March when he received an email … END_OF_DOCUMENT_TOKEN_TO_BE_REPLACED

VLACHOVICE-VRBETICE, Czech Republic — For nearly a century, local residents have wondered at the strange comings and goings at a sealed-off camp … END_OF_DOCUMENT_TOKEN_TO_BE_REPLACED