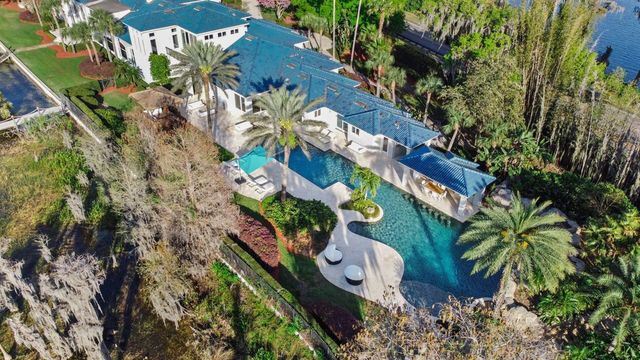 Having a massive sense of mansion déjà vu? We don’t blame you.

The lakefront compound in Windermere, FL, owned by the basketball Hall of Famer Shaquille O’Neal has floated back on the market after a deal reportedly fell through in February.

Before that deal collapsed, the mansion, which was customized to fit O’Neal’s oversized personality, had bounced on and off the market for years.

Other listing agents have tried—and failed—to interest a buyer in snapping it up.

Now, an exclusive listing agent, Benjamin Hillman with Premier Sotheby’s International Realty, has come off the bench to try his hand at selling the house. He’s ready.

The local expert of this exclusive area in central Florida has sold a number of neighboring homes in the community. He’s kept an eye on the property from the sidelines for years, and took issue with what he called the “overpriced” $28 million ask in 2018.

That aspirational asking price eventually came down, and was slashed to $22 million a mere seven months after landing on the market. In 2020, the price was reduced again to $19.5 million.

As we reported last year, the 12-bedroom home re-emerged on the market with a new price and a new strategy.

Last year’s strategy may have been fresh, but the decor was stale. There was a lot of Shaq memorabilia, a Shaq-branded indoor basketball court, and the hoops legend’s oversized furniture.

Last year, the strategy asked buyers to look past the “Shaq-ness” of the home and focus on appealing bones of the house, its great location, a nearly 4-acre parcel of land with 700 feet of Lake Butler frontage, and the mansion’s location within the exclusive Isleworth Golf and Country Club.

Then to hook a buyer with big dreams, renderings of the mansion showcased the potential to make the place over into a modern home with no signs of the basketball player’s ownership. That seemed promising, and in fact, the strategy led to an offer. Alas, the offer with that brokerage fell through earlier this year.

In February, Hillman got the call he’d been waiting for.

“‘Hey, Ben, it’s Shaq,” Hillman remembers hearing, after he picked up a call from an unknown number.

“Well, it’s about time you called me,” Hillman recalls saying.

Shaq may be a global superstar with endorsements aplenty. But Hillman knows Windermere real estate.

First up, the agent felt that the most recent price of $16.5 million was in line with local comps—so he didn’t recommend yet another reduction. Even though it’s nowhere near the 2018 price tag, if the home closes for its current ask, it would be on track to set a record for Central Florida, according to Hillman.

Next, Hillman conducted a walk-through of the circa 1990 property, and came up with a to-do list that may have been hard for his celebrity client to hear. In short, the Shaq house needed to de-Shaq.

“I’ve watched this house over three years, and they all went down the same road of Shaq, Shaq, Shaq,” Hillman says of past agents. “But I want to take him out of the picture. I requested all the Shaq items that could be moved, be moved.”

For a 31,000-square-foot spread known as “Shaq-apulco,” it would be a challenge.

Hillman says his strategy is to “highlight the amenities, the location, the lakefront, so I can educate a new buyer, who doesn’t just want to buy Shaq’s house—but wants to buy a nice house in an exclusive community.”

The 7-foot-1 inch tall basketball legend had purchased the property in 1993, and made it his own.

There was the massive bed with the “S” monogram in the master bedroom. The diesel truck mural, the Superman-decorated movie theater, and similarly branded auto showroom. Then there was the 6,000 square-foot, indoor, Shaq-emblazoned basketball court, and the retired player’s memorabilia filling the space.

Atlanta, where he’s an analyst for “Inside the NBA” on TNT.

The post Shaq’s Florida Estate Back on Market—With a Sales Strategy of Much Less Shaq appeared first on Real Estate News & Insights | realtor.com®.

Three million lives: That is roughly equivalent to losing the population of Berlin, Chicago or Taipei. The scale is so staggering that it sometimes … END_OF_DOCUMENT_TOKEN_TO_BE_REPLACED

A homeless person wearing gloves and a protective mask sits with a sign that reads, "Seeking Human Kindness" amid the coronavirus pandemic on April … END_OF_DOCUMENT_TOKEN_TO_BE_REPLACED