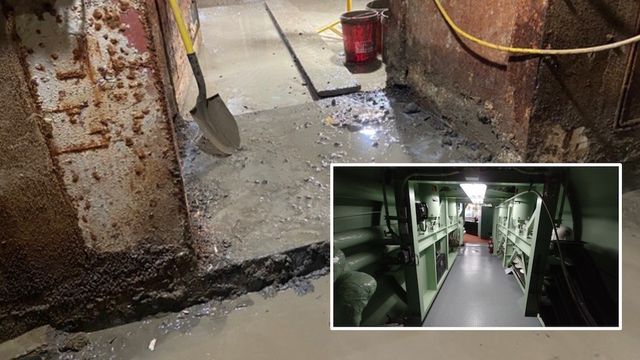 Two decades ago, Nik Stroiney toured the Titan Missile Museum in Arizona. And his fascination with these historic weapons and the underground spaces that housed them never diminished.

In 2019, Stroiney realized his dream with the purchase of his own missile silo complex, located outside of Little Rock, AR. He also launched a YouTube channel to document the work turning the decommissioned site from a dirt-filled underground curiosity to a usable space that will someday serve as both living quarters and an event center.

His Atomic Underground channel has nearly 50,000 subscribers, and some of his videos have scored over a million views,

Blast from the past

For those not up on Cold War history, subterranean Titan II missile sites were excavated in the U.S. from 1960s until the missile program was decommissioned in the 1980s. A total of 54 missiles were set up in groups of 18 around three Air Force bases in Arizona, Kansas, and Arkansas.

The top-secret Titan was “the largest land-based missile ever deployed by the U.S.,” according to the Titan Missile Museum website.

Each site contained a missile silo, a launch control facility, and an access portal, and all were staffed 24/7 by Air Force personnel.

When the program was scrapped, the missiles were removed and parts of the silos were demolished and buried. Many of the properties, which often include acres of land, were eventually sold. Some are in private hands, and some are owned by local governments. In fact, we’ve come across a few of these silo sites on the market.

But we’ve never spoken with an owner in the middle of an underground fixer-upper project—until now.

It isn’t glamorous work, but Stroiney is in it for the long haul—and for days like the one seen in the video below, when he was able to open up the silo’s escape hatch for the first time.

Stroiney, an airline pilot for a regional carrier, talked to us about the progress and what it’s like to own a Cold War–era missile silo.

In fact, he even gave us a video tour  of the current state of his underground work.

Here’s our interview, which has been edited for length and clarity:

I toured the Titan Missile Museum in Arizona in the winter of 2000. As a teenager, I fell in love with the idea of an underground home or bunker. Now, with where I’m at in my life, I can pursue larger projects like this.

I ran into GT Hill, who is now my silo neighbor, who has a YouTube channel. GT was friends with the then-owner of my site. It wasn’t officially listed, but the owner was in a position where he was willing to sell. So I approached him and ended up purchasing the property in June 2019.

How much did you pay?

So you see a silo as a savvy investment?

That’s how I look at it. When I bought it, it was flooded with water. I’m cleaning it out to make it a usable space again, which will take the value up considerably.

Did you have an idea of what you were in for?

Yeah, my neighbor’s YouTube channel laid out a road map for what I was getting myself into. Each one of these silo sites has its own unique challenges.

In my case, [scrap metal dealers] that the Air Force had let in there before burying these sites had cut out a spring. That caused my whole launch control center to lean to one side, which was a little odd.

I also have more mud in my site than most because the Air Force was supposed to weld the door shut at the main entrance. But my door was wide open. So all the dirt and mud that they poured down the hole ended up down in my facility. So my site is particularly dirty right now.

It is. We’re getting there. We no longer have any water, but we’re a few months away from being mud-free. And we’re removing scrap steel.

Once that’s done, it gets it to a blank canvas that we can start building onto. And there’s a million other projects after that. I figure it’s a 10-year build to be fully done.

How do you get underground?

The Titan II has a secure hatch to get underground. Then you take four flights of stairs down to the main level, which is 35 feet below the surface. Those stairs and the top few feet of concrete were all destroyed by the Air Force, so we had to build it back.

Once you get four levels down, that’s where you meet the first of four 6,000-pound blast doors. The first door—which is known as Door 6—leads into the blast lock, which always kept the crew behind at least one door in the event of an explosion—either from an external or internal source.

Then there are how many floors below that?

When Graham Brooks received his ballot in early February, asking whether he wanted to form a union at the Amazon warehouse in Alabama where he works, … END_OF_DOCUMENT_TOKEN_TO_BE_REPLACED

QuantumScape could pursue legal action after coming under assault in a scathing report released by activist short-seller Scorpion Capital."We're … END_OF_DOCUMENT_TOKEN_TO_BE_REPLACED