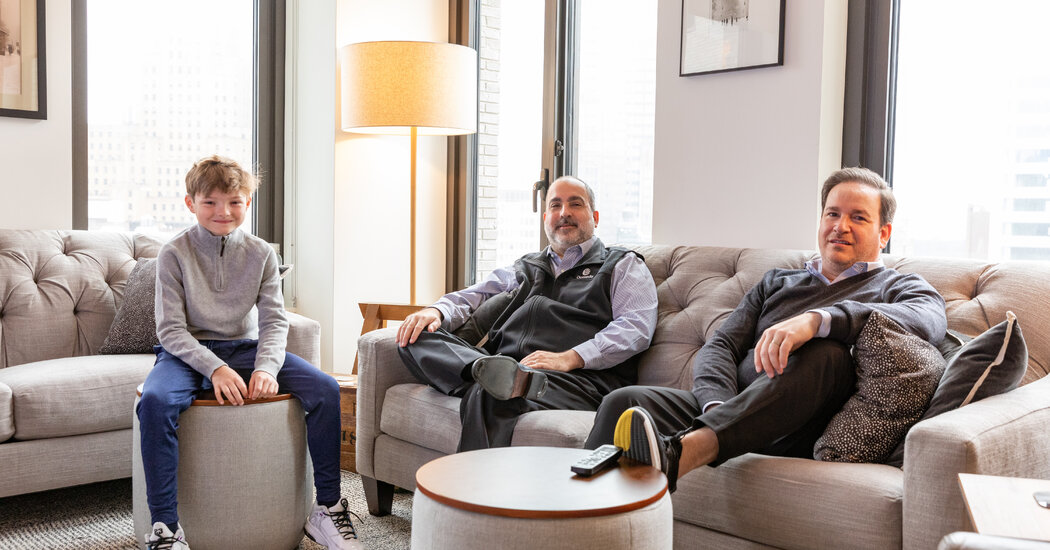 Over the 24 years of their relationship, Joseph Vitale and Robert Talmas have let their jobs dictate their real estate decisions. Work moved them from New Jersey to New York to Boston and back to New York. Mr. Talmas, now the head of compensation and benefits for WW (formerly Weight Watchers), spent a brief stint in Singapore. But as their family grew, those priorities changed.

“We’ve always bought or rented for work,” said Mr. Vitale, a reinsurance broker. “When I worked at the World Trade Center, we lived in Bowery Park City. When I worked at Madison and 23rd, we moved to Gramercy. But this time, we rented for family.”

In December 2021, Mr. Vitale, 53, and Mr. Talmas, 51, moved from a rented two-bedroom in Gramercy Park to a three-bedroom in a new-construction high-rise in Downtown Brooklyn. Their 8-year-old son, Cooper Talmas-Vitale, had begun attending Mary McDowell Friends School in Cobble Hill; Mr. Talmas’ 93-year-old father, David, had also moved in with them during the pandemic.

With both fathers working from home, their once-comfortable apartment had become overcrowded: Jokes abounded when they had to take conference calls in a closet. Cooper’s daily commute to school — with one of his fathers or his nanny — ate away at potential family time. They needed more space, and for the first time in 24 years considered a move to another borough.

Mr. Vitale and Mr. Talmas had long been staunch Manhattanites. “We thought we were too good for Brooklyn,” Mr. Vitale said with a laugh. “When our friends moved to Brooklyn, we made fun of them.” Years ago they had briefly sublet the Park Slope brownstone apartment of a recently divorced friend, but missed the convenience of a doorman and the ease of their Manhattan commutes during the six-month stretch.

For Cooper, however, commuting to school in Brooklyn meant he often couldn’t see his friends on the weekends, or accept off-the-cuff invites to play dates at after-school pickup. “Cooper chose his school here in Brooklyn, and he worked hard to get in,” Mr. Talmas said of his son’s efforts to get good grades and complete an application interview. “So we wanted to be appreciative of that.”

Early last fall, the family’s landlord in Gramercy told them she wanted to sell. They had right of first refusal, and would have considered buying it if they hadn’t needed a third bedroom to accommodate Mr. Talmas’ father. Soon they began their apartment search, which they focused in Brooklyn. Mr. Talmas wanted to consider some brownstone apartments, but walk-ups were tricky for his dad, and Mr. Vitale was insistent on a full-service building, which would also mean elevator access for his father-in-law.

The apartment they eventually chose, at One Boerum Place, was the first they found, and the first they looked at. “I walked in and said, let’s take it,” Mr. Vitale said. However, Mr. Talmas reminded him that they had six other buildings to see that day. They eventually conferred with Cooper, who preferred a trendier high-rise whose duplexes boasted spiral staircases — not particularly kid-friendly. Mr. Talmas had his eye on a prewar, renovated building in the neighborhood. But the emphasis on family-friendliness at One Boerum Place swayed their decision.

The building was originally constructed as condos, but management decided to rent out the units instead because of the pandemic-damaged real estate market. The apartments therefore have condo-caliber fixtures: Mr. Vitale, an avid cook, loves his full gas range. “Everybody who sees the wood paneling says, ‘Oh, did you customize your kitchen?’ And I’m like, maybe!” Mr. Talmas said jokingly.

Other amenities abound: Cooper loves the pool. This summer, there will be two different green spaces on the roof; an automated garage, still under construction, will allow them to use an app on their phones to summon their car.

Occupations: Mr. Talmas is the head of compensation and benefits for WW (formerly Weight Watchers); Mr. Vitale is a reinsurance broker for Aon

D.I.Y. Decor: Mr. Vitale transformed an old television set into a bar: “That’s my baby. I went to an antique shop and I told the guy what I was doing with it, and he was devastated. When he dropped it off at my sister’s on Long Island, he said, ‘Please tell him not to change it to a bar.’ Because he’s a true antiques guy.”

The neighborhood’s most popular travel show: “I love Stanley Tucci’s ‘Searching for Italy,’ and he just made guanciale, which is pork jowl. When I walked into the local meat store, Dellapietras, I said, ‘Can I have two pounds of guanciale?’ And he said, ‘What are the chances you just watched Stanley Tucci? I’ve never had so many people ask me for guanciale!’”

Mr. Talmas’ father passed away a few weeks after the move, but while he was there with them, finding caregivers was made even easier thanks to the building’s central location. Mr. Talmas and Mr. Vitale were grateful for the time he spent with them, and with their son: “Cooper got to grow up with his grandfather,” Mr. Talmas said, “and it was great.”

Now, Cooper’s walk to school is a breezy seven minutes. Mr. Vitale guesses that 80 percent of his classmates live within a 10-minute walk of their apartment. He has joined a soccer league in Brooklyn Bridge Park, where the family spends a lot of time. When asked what he thought about the apartment, Cooper offered an immediate two thumbs up and a wide grin.

Even his dads have an easy commute from the new apartment: Mr. Talmas goes into his office in Chelsea one day a week, which takes him about 20 minutes; Mr. Vitale visits his office twice a week, which is just 10 minutes away. He’s even considered walking home from the Financial District over the Brooklyn Bridge in the summer. Both still work from home most of the time, so they have converted the third bedroom into a shared office. When one of them takes a call, the other moves to the kitchen island or Cooper’s bedroom rather than the closet.

While the couple has owned in New York before, they are enjoying the flexibility that renting allows. “Joe has always been a renter,” Mr. Talmas said of his husband. “I would rather plant roots, but nowadays, especially in the city, renting’s just part of life. And in a building like this, renters don’t treat it like they’re transients — everybody on this floor is a family. They’re not moving out next year.”

Renting now also allows them to plan for their next big move: Mr. Vitale, whose grandparents emigrated to New York from Sicily, is applying for his Italian citizenship. When they retire and Cooper goes away to college, they hope to buy, build, or renovate in Sicily.

Until then, their family is a trio of Brooklynites. Mr. Vitale has already fallen in love with a few local butcher shops; he’s even learned the best times to go to the nearby Trader Joe’s, whose Manhattan locations were usually so busy that he usually stayed away. After so many years of rejecting the borough, he said, “the biggest slap in the face is, we love Brooklyn now.”

The Bay Area is the last place in the U.S. with rental prices below pre-pandemic levels, according to a new report from Apartment List. That seems … END_OF_DOCUMENT_TOKEN_TO_BE_REPLACED

BUCHA, Ukraine — A breeze rustles through the cherry blossoms in bloom on almost every block in this small city, the white petals fluttering onto … END_OF_DOCUMENT_TOKEN_TO_BE_REPLACED