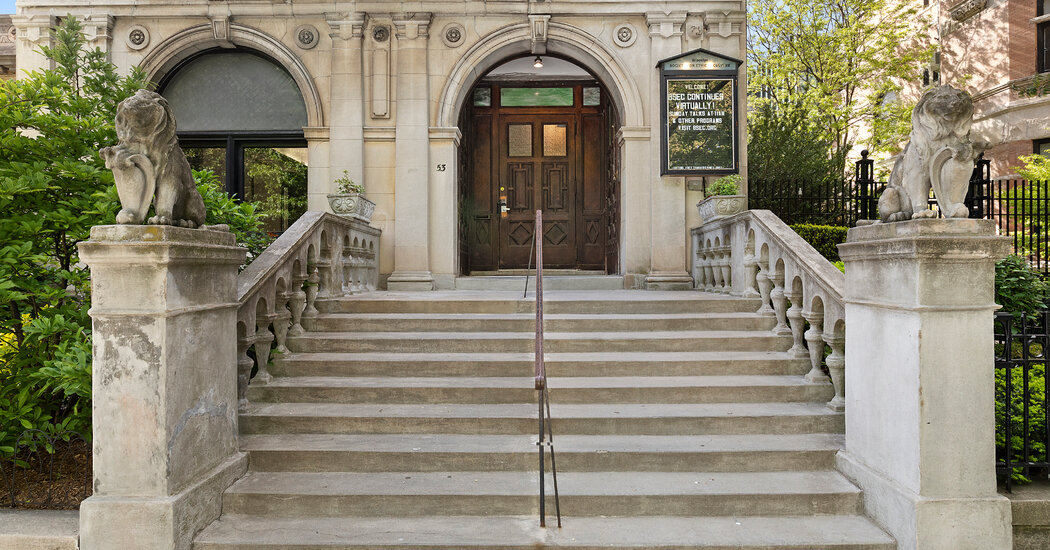 The palatial, four-story mansion at 53 Prospect Park West, with a sprawling garden and a pair of pedestaled lions keeping guard out front, has had a long, rich history in Park Slope, Brooklyn.

Built in 1901, just after the borough was incorporated into New York City, the brick-and-limestone structure was part of what was known as the “Gold Coast” of opulent homes that sprang up near Prospect Park around the turn of the last century.

The house was designed by William B. Tubby, the go-to architect for the prominent Pratt family, in a neo-Jacobean style, and was commissioned by William H. Childs, a financier, a supporter of Theodore Roosevelt’s Progressive Party and a founder of the Bon Ami cleaning products company. The mansion remained in his family until 1947, when it was acquired by the nonprofit Brooklyn Society for Ethical Culture, which supports social justice, among other things. It has used the building as a meeting house and for various programs.

$30 million asking price, and is used as a residence again, it could be the most expensive home sale in Brooklyn. (The borough record was set in January with the $25.5 million closing of a townhouse at 8 Montague Terrace in Brooklyn Heights; it was sold by Vincent Viola, the owner of the Florida Panthers hockey team, and his wife, Teresa Viola, an interior designer.)

The mansion, currently classified as commercial, was included in Park Slope’s first historic district designation in 1973. The front of the house has a classic front stoop flanked by concrete lion statues and a monumental arched doorway. The fenced-in yard, just under a quarter of an acre, is touted in the listing as “the largest private garden in Brooklyn,” with mature trees, perennial shrubs, a paved terrace, and a meditative seating area with stone benches.

The interior extends 5,724 square feet and includes a full, finished basement, which contains a large commercial kitchen and what used to be a billiards room. Judith Lief, a broker for the Corcoran Group who is listing the property with her colleague Talia Magen, says the offices in the building could easily be converted back to bedrooms. The listing estimates six bedrooms, in addition to the two full bathrooms and three powder rooms.

Many of the original architectural details remain intact — albeit in need of some T.L.C. and refurbishing — including six fireplaces, hardwood floors, numerous stained- and leaded-glass windows, carved walnut ceilings and hand-painted friezes. The curved staircase in the entrance foyer features carved scabbards as balusters.

Mary Childs Draper, was an early advocate for birth control and helped form the Planned Parenthood Federation of America.) Throughout the house are high ceilings and oversize windows. “It gets brilliant light on every floor,” she said.

Ms. Lief sees two types of potential buyers for the mansion. “One could be a private homeowner who wants one of the most extraordinary sites in New York City,” she said. “Another could be a nonprofit, a private school or museum.”

“The least likely buyer, for a host of reasons,” she added, “would be a developer who’s going to subdivide it. That’s not our target audience.”

While the Brooklyn Society for Ethical Culture wouldn’t comment on why it was selling the mansion, Ms. Lief noted that the group hoped to relocate to another space in the area. “They’ll be looking for another location that’s more manageable,” she said. “It’s a large, expensive property to maintain.”

AUSTIN, Texas--(BUSINESS WIRE)--As the first multifamily management company to be recognized in the Public Relations and Marketing Excellence Awards, … END_OF_DOCUMENT_TOKEN_TO_BE_REPLACED

There have been whispers of cooling housing and rental prices in the San Francisco Bay Area, but that hasn't yet translated into practical, noticeable … END_OF_DOCUMENT_TOKEN_TO_BE_REPLACED

Cars pass in Independence Square at twilight in Kyiv, Ukraine, Monday, Oct. 31, 2022. Rolling ... [+] blackouts are increasing across Ukraine as the … END_OF_DOCUMENT_TOKEN_TO_BE_REPLACED