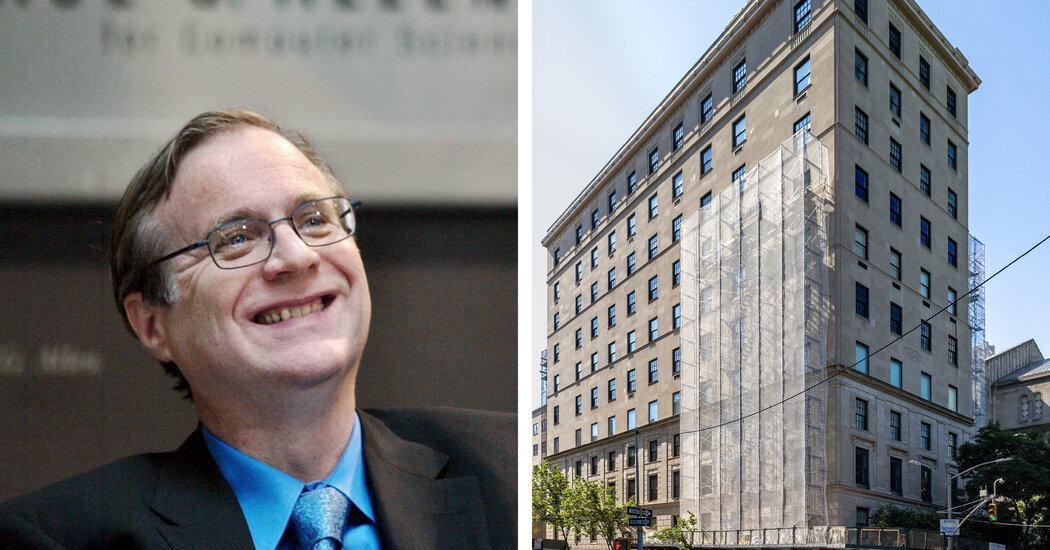 Two of New York City’s biggest sales so far this year closed in July, including a pair of co-ops sold together for $101 million by the estate of Paul G. Allen, the co-founder of Microsoft who died nearly four years ago.

The sale, to an anonymous buyer, consists of a penthouse and a full-floor unit just below it on the 11th floor at 4 East 66th Street, the exclusive limestone apartment house designed in the early 1920s by James E. R. Carpenter on the corner of Fifth Avenue.

Mr. Allen, a real estate aficionado, had accumulated numerous properties around the country. He acquired the penthouse in 2011 for $25 million, and the 11th-floor unit in 1996, reportedly for $13.5 million.

The Allen apartments were bought and sold in private deals, so there aren’t many details about them — or the recent buyer. The purchase was made through the limited liability company Eleven-Twelve East.

But past sales in the building show that the full-floor units are around 7,500 square feet, and feature spacious entrance galleries, soaring 12-foot-plus ceilings, at least one wood-burning fireplace and oversize windows that provide views of nearby Central Park.

The penthouse is reportedly a bit smaller than the other full-floor units, though it comes with a wraparound terrace suitable for private parties with the very private neighbors. The 12-story building has been home to a number of prominent residents, among them the socialite Veronica Hearst and the financier and presidential adviser Bernard Baruch.

Her 3,000-square-foot apartment has three bedrooms and three and a half bathrooms, plus a great room with an open kitchen equipped with marble countertops and custom milled wood cabinets. She also gets to enjoy treetop views of Madison Square Park, which the building faces.

Oh, and she’ll also have Jeff Bezos as a neighbor. The Amazon founder bought up five units in the steel-frame tower, formerly an office building, including a triplex.

“Only Murders in the Building.”

Ms. Schumer, who also appears in the comedy, paid nearly $12.3 million for a refurbished brownstone, four stories high and 26 feet wide, on Cranberry Street in the Brooklyn Heights Historic District. This was above the most recent $11 million list price.

Inside there is around 5,568 square feet of space, with five bedrooms and three and a half bathrooms, along with two parlors and a library. The primary suite takes up the third floor and features a dressing room and two small offices. Outside is a rear garden. The home retains some of its original flourishes, like the crown molding, marble fireplace mantles and hardwood floors, with many modern updates.

Ms. Schumer, who is married to the chef Chris Fischer, has appeared in numerous other TV shows and films, including “Trainwreck” and “The Humans.”

The sellers were James B. Lansill, a broker with the Corcoran Sunshine Marketing Group, and Jane M. Gorrell.

And in late-breaking closings, Jimmy Fallon, the host of “The Tonight Show,” and his wife, Nancy Juvonen, a film producer, sold their sprawling triplex at 34 Gramercy Park East for $10.8 million. Their recent asking price was $15 million.

The apartment encompasses around 5,000 square feet on the top three floors of the co-op building, which sits directly across from Gramercy Park. It has six bedrooms and five bathrooms.

The new owner made the purchase under 34 Gramercy Park East Trust.

Whether you optimistically hope that mortgage rates will decline or are resigned that rates will stay elevated above the historic lows of 2021, you … END_OF_DOCUMENT_TOKEN_TO_BE_REPLACED

A resident of Nikopol, Ukraine, in her backyard last month, with smoke rising from an area on the opposite bank of the Dnipro River. Credit...David … END_OF_DOCUMENT_TOKEN_TO_BE_REPLACED