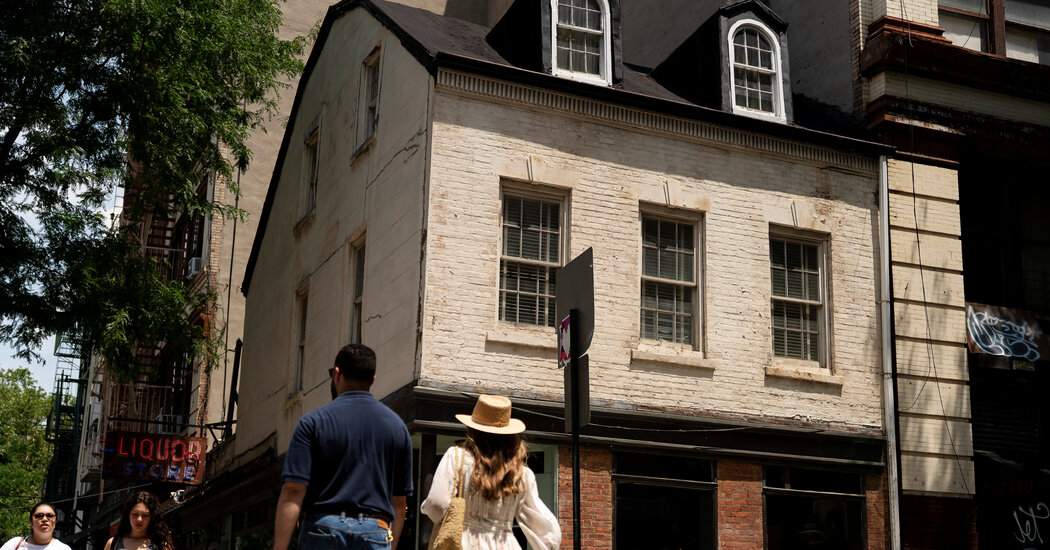 In a city of showy skyscrapers climbing ever higher in their bids to catch the eye, the beguiling little brick-and-wood house at 2 White Street in TriBeCa is striking precisely because of its humble scale and design.

Built in 1809 by Gideon Tucker, a school commissioner who ran a nearby plaster factory, the two-and-a-half-story, Federal-style corner house is exceedingly rare as a Manhattan home whose sloping gambrel roof and original dormer windows have survived more than two centuries.

The ground floor of the little house was divided into multiple storefronts, which in the 20th century held a variety of mom-and-pop shops serving a working-class neighborhood known until the 1970s as Washington Market: a corner barbershop with a candy-striped pole, a cigar store, a liquor store, a travel agency and a footwear shop with a distinctive shoe-shaped sign suspended above West Broadway. Now combined into a single storefront, the current retail space retains raffish details of its liquor-store days, including a retro red-and-blue neon sign and period gilt window lettering advertising cognacs and cordials.

18 city sites with landmark protection that are associated with abolitionism or the Underground Railroad.

The nearby homes of two other major African-American Underground Railroad figures — the publisher and New York Vigilance Committee leader David Ruggles, on Lispenard Street (where the fugitive Frederick Douglass was hidden), and the indefatigable Underground Railroad conductor Louis Napoleon, on Leonard Street — were long ago demolished.

Today, most people familiar with 2 White Street, which is also known as 235 West Broadway, associate it with one of its several liquor-related incarnations.

In 1994, Martin Sheridan, an Irish-born “roadie” for rock musicians, rented the corner storefront for $2,000 a month and opened the Liquor Store Bar, a glass-enclosed jewel box lent period charm by the old-school Liquor Store neon sign that hung over West Broadway.

Soon after Herschel Walker, the former football star, announced he would run for U.S. Senate in Georgia as a Republican, his son Christian appeared … END_OF_DOCUMENT_TOKEN_TO_BE_REPLACED

SpaceX launched four people to the International Space Station from Florida on Wednesday, as Elon Musk's company keeps up a steady pace of crewed … END_OF_DOCUMENT_TOKEN_TO_BE_REPLACED