For decades, satisfying the American Dream meant homeownership. Many expected to graduate from school, get hitched, have babies and purchase a house. Bam. Dream fulfilled.

But for some millennials who came of age right around the time of the Great Recession, their vision of success has changed.

Over the last several years, nearly all new household formations have been renters. In fact, nearly 40 percent of the population are renters – more people than ever before.

According to new Zillow research, many of those renters are young, successful and qualified to purchase a home. Across the country’s largest markets, 13.8 percent of renters report they have the income and credit score to buy the median home in their market.

However, there were 22,000 fewer homeowners this year compared to last year. This means people who can afford a home are renting instead, making competition even stiffer and putting an extra squeeze on already-tight inventory.

“Even though I could afford a mortgage, I couldn’t afford a down payment,” said Erin Mattingly, a 35-year-old renter in Washington, DC, an exceptionally competitive market where 17.4 percent of the population is qualified to buy, at least on paper. The median home value in the city is $518,600 and median rent is $2,558 – both well above the national average of $188,100 and $1,405, respectively.

Mattingly is a speech pathologist who lives in the trendy Shaw area, where values are even higher. The median home value there is $685,900 and median rent is $3,123.

“The good thing about renting is that I can hop around to new locations,” she said. “Around here, so many places are going up. It’s near all the new restaurants, boutiques and bars. It’s turned into the place to be.”

But, even as a highly-qualified renter, it’s difficult to save, she said. She wants to put 20 percent down and is working to pay off her credit cards first. It’s also more difficult to afford a home as a single person, she added.

“I would love to own, but it’s just not an option right now,” Mattingly said. 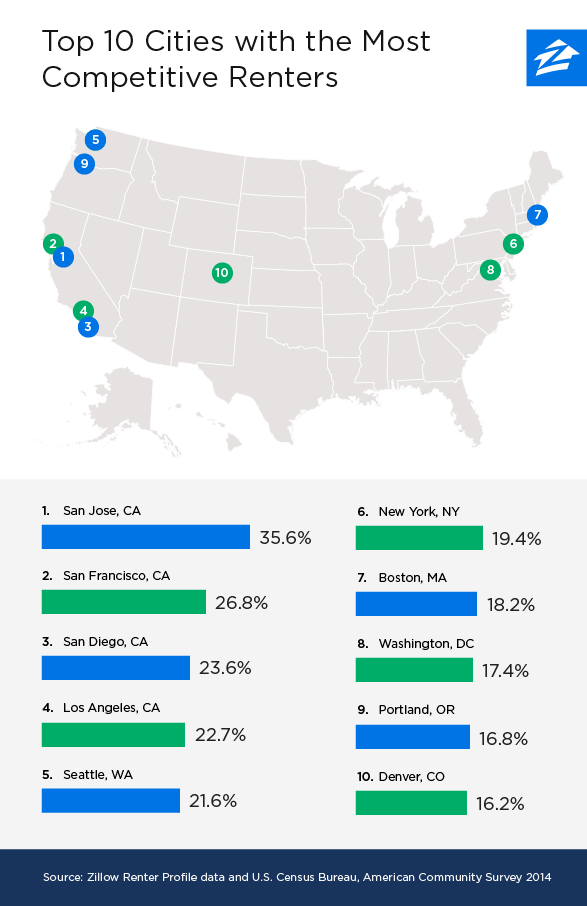 Across the country, young adults are waiting longer to buy homes, no matter where they fall in the income and credit brackets. They are also delaying marriage and starting families – events that often precipitate a home purchase. In many cases, these renters are also paying off student and credit card debt. Some may have graduated college during the Great Recession and are working their way through lost earning power.

However, some people are choosing to rent, even if they are qualified to purchase a home, as it allows for a flexible lifestyle. They want the option to be able to move for a job or perhaps they are attracted to a hip location full of amenities.

But, even if a renter has the salary, credit and down payment in order, a lack of housing inventory may be the driving factor in continuing to rent over buy. New research found that areas with the most qualified renters also have the fewest homes for sale, which is especially true of areas with strong job markets.

“When faced with hurdles of high prices and low inventory, first-time home buyers are renting longer than ever before, even if they are qualified to buy,” Zillow Chief Economist Dr. Svenja Gudell said.

“San Jose, San Diego and Seattle are among the most competitive places for buyers, and the going isn’t any easier for renters – as they are competing against throngs of financially-sound applicants with strong credit and high incomes. This is a conundrum for many young people who move to those cities because of their strong job markets, only to find tight inventory and steep competition standing between them and their dream home.”

Four years ago Anna Rubenstein and her now-husband moved to Dallas for him to complete his residency at an area hospital. While Dallas is one of the lowest-ranking markets (fourth) in its share of renters qualified to buy, the Rubensteins can buy but choose not to. They decided to rent because, as many people who move to a new area for a job do, they wanted to get to know the area before purchasing a home. She was also nervous about the market.

“When we arrived it was very much a sellers’ market, so it didn’t seem like the right time to buy,” Rubenstein said. “Even the rentals we looked at would get grabbed up just hours after being listed.”

Additionally, she was aware that between her job in non-profit development and the intense hours of her husband’s job, there would be very little time for either of them to complete repairs or renovations. She was also unsure of how long they would be in the Dallas area, and didn’t want to be tied down with a mortgage – especially since she still owns a condo in Atlanta that she purchased in 2006.

“We didn’t want to get stuck not being able to sell afterward if the market took a turn for the worse like it did after I bought my condo,” she said. “I’ve had a renter for more than 7 years, but having that previous mortgage made us weary of buying and adding an additional debt to worry about.”

MIAMI — In a welcome but likely brief victory for supporters of abortion rights, a judge in Florida blocked a state law banning abortions after 15 … END_OF_DOCUMENT_TOKEN_TO_BE_REPLACED

NEW YORK--(BUSINESS WIRE)--Stake, which provides Cash Back and banking services to renters, announced today the completion of its $12 million Series A … END_OF_DOCUMENT_TOKEN_TO_BE_REPLACED

The Sacramento home where Ronald and Nancy Reagan lived during his tenure as governor of California has hit the market for $5 million.Built in 1929, … END_OF_DOCUMENT_TOKEN_TO_BE_REPLACED