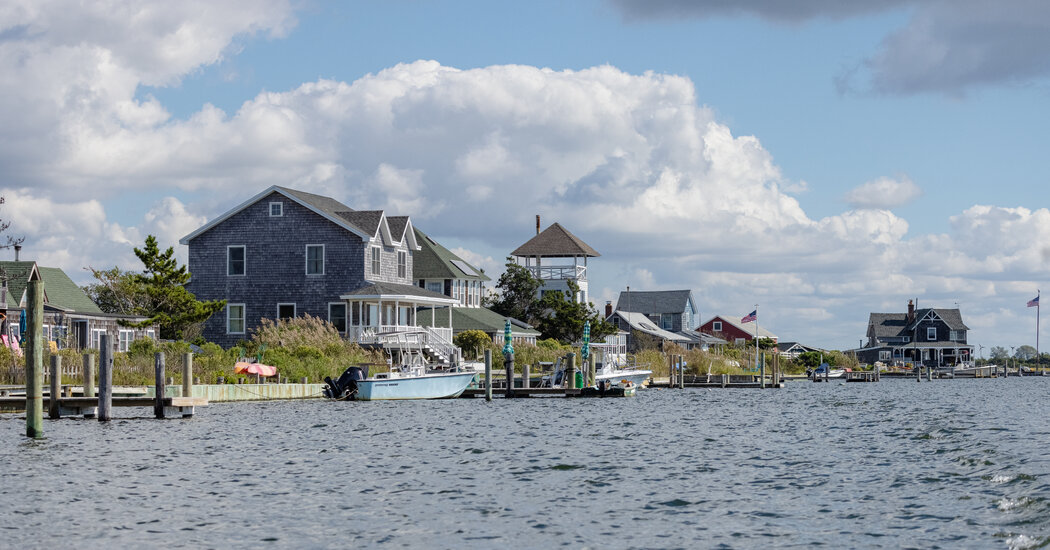 There is a shared distaste for showiness and pretense.

“It would be ludicrous to try to be pretentious on Oak Island because you can’t go anywhere once you are here,” said Alanna Heiss, the founder of MoMA PS1. She and her husband, Fred Sherman, a litigator, scanned the classifieds of newspapers for many years before finding their vintage cottage. “You can only socialize through friendship,” Ms. Heiss added.

Ms. Liddle, the island’s unofficial social director, plans covered dish suppers, where you bring enough to feed your own family and four other people. Games include potato spoon races. There is a sailing race and a book club.

“You’ll always be an outsider if you didn’t grow up coming here,” said Ms. Rexrode. Not so for their children, who began summering here as toddlers. When they’re on the island, they surf at nearby Gilgo Beach and sail, but they also put up solar panels and install decking. Their 17-year-old son, Philip, returns for autumn duck hunting with his father. And when their city friends visit?

“They are a little stunned but then they think it is cool,” said Philip Chirigos.

Houses here don’t often come up for sale because “people keep them in the family,” said Lisbeth English, an associate agent with Netter Real Estate in West Islip. She is the listing agent of 24 Oak Street, a two-bedroom built in 1914, on the market for $249,880.

A red shingled house is under contract for above its asking price of $399,000, said Matthew Arnold, an agent at Netter. And Listing Pro has a four-bedroom, two-bath house listed on the island for $485,999.

After 16 summers, Mr. Sherman and Ms. Heiss are ready to sell their house. They paid $220,000 for it and spent $100,000 on renovations, including the addition of a screened-in porch where the couple enjoys bird watching.

Both he and his wife speak of Oak Island with a wistfulness. Seeing the necklace of houses from Ocean Parkway “is like a glimpse of ‘Brigadoon,’” Ms. Heiss said. “Everybody can see it but they can’t get there.

Target has added new brands to its beauty department. At a growing number of stores, it also has mini Ulta Beauty shops with prestige brands.Melissa … END_OF_DOCUMENT_TOKEN_TO_BE_REPLACED

Just a few months ago, builders couldn't put homes up fast enough to appease the hordes of eager buyers. They boasted about lengthy waitlists, even … END_OF_DOCUMENT_TOKEN_TO_BE_REPLACED