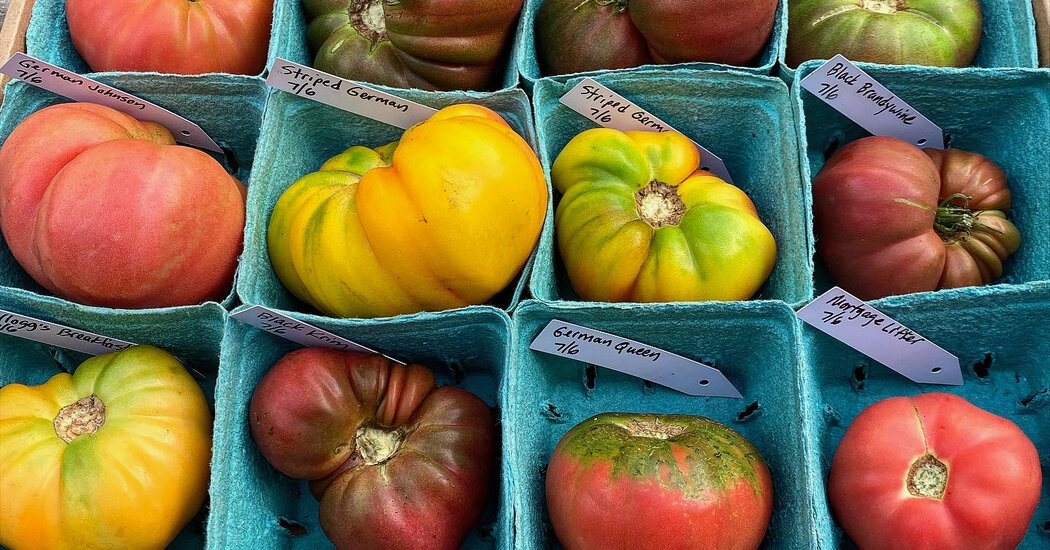 “We are the luckiest tomato growers in all of history,” proclaimed Craig LeHoullier as he thumbed with dramatic effect through the Seed Savers Exchange yearbook, a hefty index of nearly 12,000 heirloom varieties of the beloved Solanum lycopersicum.

Choosing among such a staggering selection of tomatoes, plus hundreds of modern hybrids not included in that print version of the yearbook, is the first step toward your best-ever harvest — or what Dr. LeHoullier, a retired chemist who has grown perhaps 3,000 varieties, calls “epic tomatoes.”

And reaching that goal does not start with just any old tomato that the local big-box store serves up as transplants by the truckload.

an online course that he teaches with his friend Joe Lamp’l, the host for 12 years of the Emmy Award-winning public television program “Growing a Greener World.”

Mr. Lamp’l is no tomato slouch, either. Each year, under lights in his Atlanta-area basement, he sows more than 40 varieties — a total of about 2,000 seedlings. He transplants 60 into his raised-bed garden; the rest go to an annual plant sale that he holds with his younger daughter, Amy.

Southern Exposure Seed Exchange, whose founder tried some Cherokee Purple seed that Dr. LeHoullier shared, and introduced the variety to commerce in 1993. The Seed Savers Exchange, a nonprofit whose catalog showcases heirlooms, is “pivotally important,” said Dr. LeHoullier, who serves as the group’s tomato adviser.

Johnny’s Selected Seeds and Pinetree Garden Seeds also make his list, along with Victory Seeds, which offers all of the varieties from the Dwarf Tomato Project, a breeding effort that Dr. LeHoullier co-founded in 2004, with about 145 varieties. It’s “the heirloom experience with short plants,” he said, “and no need to deal with suckering.”

Dwarfs are perfect for pots or space-constrained gardens — and for gardeners who don’t want to repeatedly prune and support a 10-foot vine.

Identify the varieties that match your space and garden conditions, and especially those rated with specific resistance to any disease pressure you have experienced. Both men grow a mix of hybrids and heirlooms, which are usually considered less resistant, as a hedge against loss.

And while you’re browsing, consider what you’ll be doing with the tomatoes you grow. Will they be hot-packed in Ball jars, as whole tomatoes? Then Dr. LeHoullier recommends not just the usual suspect, Roma, but any color of Oxheart. But if you’re planning to eat them out of your hand, Dr. LeHoullier and Mr. Lamp’l suggest Sun Gold, the popular tangerine-orange hybrid cherry tomato.

Calculate when to sow for your location.)

Day One journaling app to record data and photos.

Once the seeds germinate, Mr. Lamp’l lights them for 16 hours a day. Each fixture hangs on ratchet pulleys, so it can be raised as the plants grow. At first, he follows each light manufacturer’s guidelines for recommended positioning; then, based on the plants’ response, he adjusts.

Daniel Acker | Bloomberg | Getty ImagesHome prices are softening in most markets across the nation.Yet home prices are still higher compared with a … END_OF_DOCUMENT_TOKEN_TO_BE_REPLACED

Joel Silver has been responsible for some of Hollywood's biggest franchises, including "The Matrix," "Die Hard," "Predator," and "Lethal Weapon."So … END_OF_DOCUMENT_TOKEN_TO_BE_REPLACED