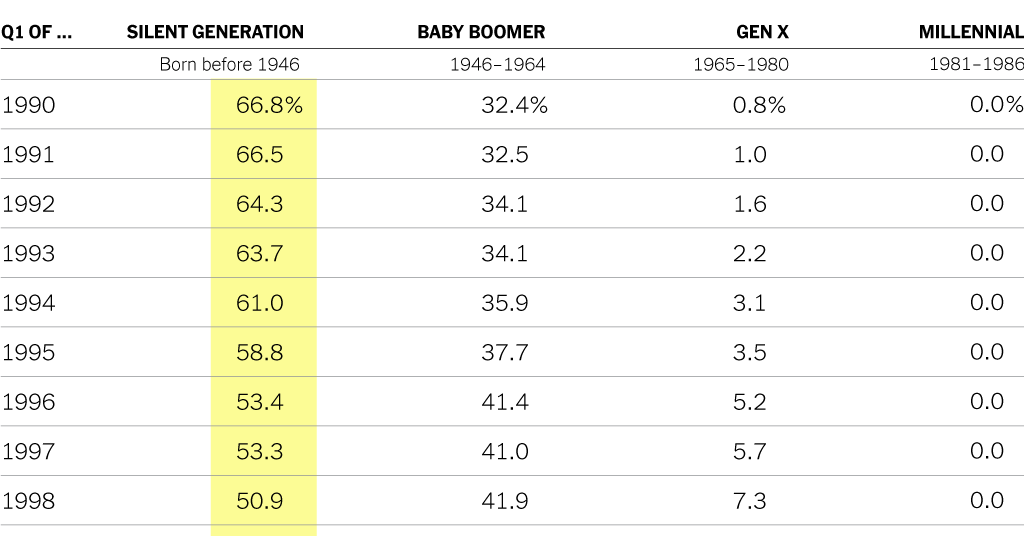 The concept of aging in place, already growing in popularity before the pandemic, has found renewed interest among baby boomers, some of whom are now wary of nursing homes, where at least one third of U.S. Covid-19 deaths have occurred. The trend is intensifying pandemic home-inventory shortages and price increases, frustrating younger buyers who want to grab their share of real estate wealth.

The bulk of real estate wealth was long held by baby boomers’ predecessors, the Silent Generation (those born before 1946), but they generally followed the familiar pattern of selling later in life and moving in with extended family, to assisted-living facilities or nursing homes. Aging-in-place boomers are disrupting this trend. This week’s chart, using Federal Reserve data, shows that boomers surpassed the Silent Generation in real estate wealth in 2001, and have yet to yield that position.

So where does that leave the next generation in line for homeownership — Generation Xers, born between 1965 and 1980 — in the supply-and-demand equation? According to the NAR 2021 Home Buyers and Sellers Generational Trends Report, about 24 percent of recent buyers have been Gen-Xers, the highest rate among all age groups. But roughly the same percentage of Gen-Xers were sellers, suggesting musical chairs rather than substantial gains in homeownership and real estate wealth.

In 2029, the youngest baby boomers will have their 65th birthdays and the oldest their 83rd. As the tail end of this generation heads to retirement, some will sell their homes, and if they don’t, eventually their estates will. But unless a lot more homes are built, and fast, the younger generations will simply have to wait for their share of real estate riches.

Target has added new brands to its beauty department. At a growing number of stores, it also has mini Ulta Beauty shops with prestige brands.Melissa … END_OF_DOCUMENT_TOKEN_TO_BE_REPLACED

Just a few months ago, builders couldn't put homes up fast enough to appease the hordes of eager buyers. They boasted about lengthy waitlists, even … END_OF_DOCUMENT_TOKEN_TO_BE_REPLACED