What does it mean to own property there? For starters, automatic membership in the country club and ferry rides to an exclusive beach on Fire Island.

For years, Melissa Feldman had one of the worst professions conceivable in a pandemic: She organized social events for the art world. After the parties stopped, Ms. Feldman, 57, forged ahead with a new life. She sold her Chelsea apartment and moved into her weekend home in Bellport, N.Y., a village of about 2,100 on the South Shore of Long Island. Then in August, Ms. Feldman opened the Storefront, a gallery, fashion boutique and bookstore on South Country Road, Bellport’s main street.

Bellport hadn’t had a bookstore in years, and it is hard to imagine how it survived without one. For decades, the village on the Great South Bay, 60 miles east of Manhattan, has been a hotbed — in an ocean-breezy kind of way — of writers, editors, publishers, artists, gallery owners, photographers, broadcasters, architects and other occupationally glamorous and literate people. 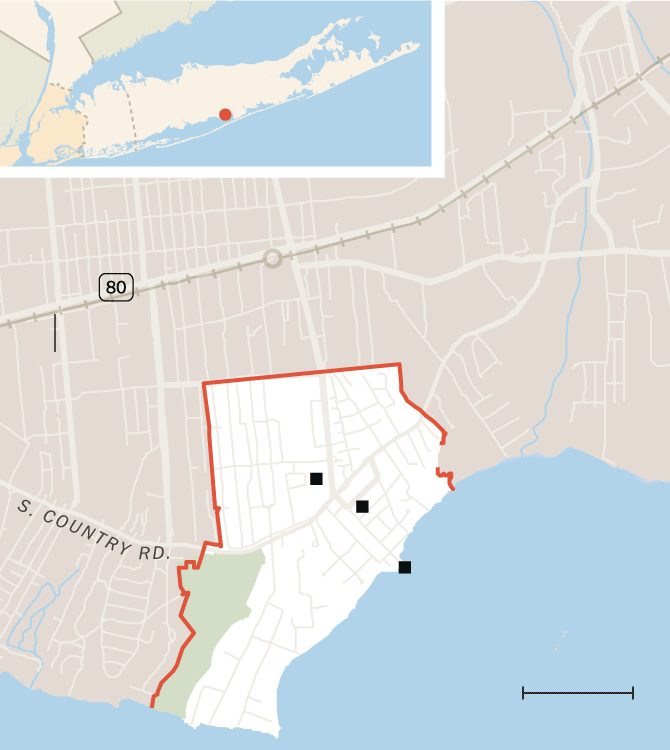 Ms. Feldman, whom New York Magazine once called “the art party princess,” described the community as “all very accomplished, but at the same time pretty low-key, with none of the attitude you find in the Hamptons.” She has settled contentedly into the two-bedroom ranch house she bought in 2017 for $300,000. (She did a gut renovation and landscaping, and added a swimming pool.)

A considerable portion of Bellport is populated by part-timers, many who moved into their weekend homes during the pandemic and some, like Ms. Feldman, who firmly repotted themselves. But long before Covid-19, the village’s natural beauty and convenience were converting urbanites into dedicated village people.

“I came here kicking and screaming,” said Elettra Wiedemann, 37, who settled in Bellport full-time three years ago. Her partner, the actor Caleb Lane, is originally from Texas and couldn’t imagine raising their young son in Brooklyn, she said. “I was Manhattan-born and -bred, but after three months of being out here, it was so pleasant and easy, and the community is so kind. Whenever I want to go in the city, I hop on a train and I’m in New York in 90 minutes. I used to be stuck in an F train in a tunnel for that time.”

Ms. Wiedemann found another advantage in moving near her mother, the actress, director and model Isabella Rossellini, who offered not just grandmotherly assistance but also employment at her farm in Brookhaven Hamlet, called Mama Farm. The advantages cut both ways. Ms. Wiedemann, who is expecting her second child with Mr. Lane, holds a degree in biomedicine from the London School of Economics and is a food expert. She’s now the executive director of the farm, with a community-supported agriculture subscription program that, she said, has doubled in popularity during the pandemic.

Bellport Village is in the town of Brookhaven, in Suffolk County, about halfway between Manhattan and Montauk. It is bordered to the north by Head of the Neck Road, to the west by Bieselin Road and the Bellport Country Club, to the east by a stream called Motts Brook (some claim Brookside Avenue as the boundary) and to the south by Bellport Bay.

Although other areas in the 11713 postal code are called Bellport (or North Bellport), the village is a distinct entity. It has a mayor, a deputy mayor and three trustees, a highway department that plows the roads, and a sanitation department. Its character — a pleasant combination of a weathered coastal hamlet and groomed midcentury suburb — is controlled by an architectural review board, a historic district preservation commission, a planning board and a zoning board of appeals.

Owning property in Bellport Village confers extraordinary privileges. In summer, residents and their guests can ride the Whalehouse Point ferry to an exclusive beach on Fire Island called Ho-Hum. They receive subsidized membership at the Bellport Country Club, which has a venerable golf course and five tennis courts. They are allowed to park at the marina with its newly rebuilt dock. The village also owns a freshwater bay called Peat Hole that is approached by a path through the woods and used by ice-skaters in the winter.

Interior recreations include the 92-year-old bowling alley at the community center on Bell Street, which received an Architectural Digest-approved makeover in 2019. The South Country Library has been a stalwart through the pandemic, supporting a food pantry, handing out mandala-painting kits and holding virtual bingo games, qigong classes and financial workshops.

The public has access (as social distancing allows) to Mothers’ Beach, near the end of South Howells Point Road (though nonresidents can’t park there); to the Gateway Playhouse (now the Performing Arts Center of Suffolk County), which is embarking on its 72nd season; and to the boutiques, galleries and restaurants in village’s compact commercial district.

Copper Beech is a four-year-old shop co-founded by the interior and product designer Thomas O’Brien that combines home furnishings and gourmet foodstuffs. Bellport General, founded by Stefan Beckman, a production designer, recently popped up with fashion and coffee. Because Bellport lacks a sewer district, wastewater-disposing restaurants are limited to a handful, including Papa Nick’s Pizza, the Bellport (continental), Café Castello (Italian) and Porters on the Lane (nautical).

“I always told my wife our daughter lived in a make-believe world,” said Ray Fell, who has been the mayor of Bellport Village since 2013 and has lived in the same house on Brewster Lane since 1972. “Golf lessons twice a week, tennis lessons once a week, and every afternoon in summer she would go over to the ocean.”

Mr. Fell’s daughter is now a pediatric surgeon in Los Angeles, but that didn’t stop her from buying a second home next door to him in Bellport.

Bellport’s historic houses are concentrated between South Country Road and the bay, especially on streets that point toward the water, including Livingston Road, Academy Lane, Browns Lane and Bellport Lane. The last, which runs past Osborn Park and the Bellport Bandshell, leads directly to the marina.

North of South Country Road, a few 19th- and early 20th-century properties can be found on North Howells Point Road, and on and off New Jersey Avenue, but the bulk of the housing stock dates from the 1940s, ’50s and ’60s.

Before 2020, the entry price for older homes was $1 million to $1.2 million, said Howie Guja, a salesman at Old Purchase Properties, in Bellport Village. Now it’s closer to $1.5 million, if the house comes to market at all. The pandemic has shrunk inventory, which was never expansive here, even in recessionary times. And sales are often conducted privately, Mr. Guja said.

Before the pandemic, midcentury houses north of South Country Road started at around $350,000; now they’re at least $450,000. The sellers tend to be longtime residents retiring to other communities, Mr. Guja said, adding that the houses usually need updating.

Ease and informality are the qualities villagers point to when they explain why Bellport is the opposite of the Hamptons. “It’s not the kind of place where you show off,” Mr. Guja said, adding that the homes “are not a conspicuous-consumption buy.”

Tricia Foley, a designer and writer who directs the Bellport-Brookhaven Historical Society, described locals riding to cocktail parties on bicycles, the men “in bow ties, the women in sundresses.” Her new book, “A Summer Place: Living by the Sea,” due out from Rizzoli in April, opens up some Bellport homes and gardens for “inspirational design ideas for casual summer living.”

A shortage of developable space and the watchful eyes of preservationists help the village keep its character. But aesthetic conservatism doesn’t entirely rule Bellport, noted Katia Read, a ceramist and environmentalist who, with her husband, the art dealer Howard Read, has spent summers in the village since the 1980s. “Bellport has become a hub for modern architecture, alongside a growing movement to preserve the 19th-century history of the village,” she said.

The Long Island Rail Road provides train service from Bellport station to Brooklyn and Manhattan. A direct train that leaves Bellport at 6:44 a.m. on weekdays arrives at Penn Station at 8:23 and costs $17. (Peak fare is $23.50.)

Driving time to Midtown Manhattan via the Long Island Expressway is about 90 minutes in reasonable traffic.

In 1815, Thomas Bell, a sea captain who worked for the American Coast Wrecking Company collecting salvage from ships that ran aground on Fire Island, sailed through a gap in the long, sandy stretch and encountered the land that would later be Bellport. With his brother, John Bell, he developed the area as a seaport and shipyard. Eventually, the breach closed, cutting off the route to open ocean, and Bellport became a popular 19th-century summer resort.

In 2012, Hurricane Sandy reopened what is now known as the Bellport Inlet. It provided the unexpected benefit of allowing contaminants to be flushed from the bay, improving water clarity. Further assistance has been provided by oysters and shellfish deposited into the water by a group called Friends of Bellport Bay — 1 million of the creatures, as of October.

Soon, homes near the synagogue were evacuated as city, state and federal officials descended on the scene, the chief said. Mr. Akram was in contact … END_OF_DOCUMENT_TOKEN_TO_BE_REPLACED

A shopper carries a bag outside a Walmart store in San Leandro, California, on Thursday, May 13, 2021.David Paul Morris | Bloomberg | Getty … END_OF_DOCUMENT_TOKEN_TO_BE_REPLACED

The rapper and entrepreneur Sean "Diddy" Combs has recorded a sale of one of his many homes. As we mentioned in our rundown of the impresario’s … END_OF_DOCUMENT_TOKEN_TO_BE_REPLACED