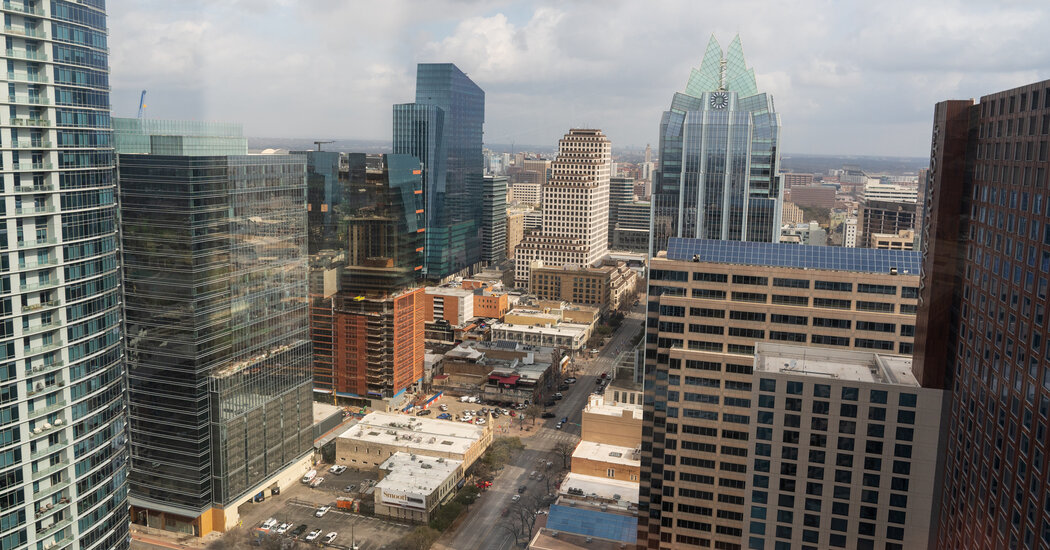 AUSTIN, Texas — In March 2020, the outlook in Austin was bleak after the pandemic forced business closures, lockdown orders and the cancellation of South by Southwest, the annual festival that brings in millions of dollars for the city.

A year later, optimism has replaced despair. Across the nation, the coronavirus remains a threat and empty office buildings and restaurants have hampered growth, but Austin, the Texas capital, has emerged as a hot spot for commercial real estate investment and a magnet for out-of-state corporate relocations that are strengthening its allure as a center of high-tech industry.

The city has become the No. 1 destination in the United States for potential commercial real estate investment, according to the CBRE Group, a national real estate services and investment firm. It displaced Greater Los Angeles as the most preferred market for 2021 because of the resilience in its labor market and an outlook for steady growth, according to an investor survey that CBRE will release this week.

a report released in January by the Austin Chamber of Commerce.

The city’s prosperity is part of a broad economic wave that has spread across parts of the Sun Belt. The Dallas-Fort Worth area, which ranked No. 2 on CBRE’s investment survey, has also been high on the list of urban centers that have seen stability during the pandemic.

“The Sun Belt markets of Austin, Dallas, Phoenix and Atlanta were among the top-performing metros where the least number of jobs were lost in 2020,” CBRE said in its survey.

Home to offices of tech giants such as Apple, Dell, Facebook, IBM and Samsung, Austin is increasingly considered one of the nation’s dominant tech hubs after Silicon Valley, promoting itself as “Silicon Hills,” a reference to its location in the Texas Hill Country.

That cachet has helped lure others. Elon Musk, the chief executive of Tesla, said in December that he had moved to Texas from California, an announcement made as construction crews were erecting a $1.1 billion, 5,000-employee Tesla factory in the East Austin area. Oracle, one of the world’s largest database companies, announced in December that it was moving its headquarters to Austin from Silicon Valley.

a report released in January by JLL, a commercial real estate services company. But the market in Austin was strong, “with less than 1 percent net occupancy losses in 2020,” the report said.

New projects in Austin are adding skyscrapers downtown and creating retail and residential complexes elsewhere in the city. Although the pandemic has not held back development, it has influenced design changes like touch-free elevators, expanded open space, operable windows and improved ventilation.

Experts attribute Austin’s counterintuitive economic performance to a number of factors: a stature as an education center and tech hub, a business-friendly climate, an abundance of social attractions and the charming eccentricity that spawned the slogan “Keep Austin Weird.”

“All the things that make Austin an attractive place before the pandemic are still here despite the pandemic,” said the mayor, Steve Adler, who noted that South by Southwest returned this month as an online event and that organizers were working toward its physical return in 2022.

The flood of job-seekers coming to Texas has led to an influx of out-of-state investment capital, said William C. Jenkins, a principal of Stonelake Capital Partners, a developer in Austin that is planning a 50-story office and residential tower downtown. As migrating companies create new jobs in the Lone Star State, he said, institutional investors are looking for “new cutting-edge, best-of-market real estate in Austin and in Texas” with an eye to “write big investment checks” for major projects.

Out-of-state developers are beginning to notice. Tishman Speyer, a real estate developer based in New York, announced in February its debut in the Austin market, purchasing the Foundry, a two-building office property in East Austin. Adding the city to its real estate portfolio was a “logical choice,” Rob Speyer, the firm’s president and chief executive, said in a statement.

Other major developers have long made Austin an essential element in their growth strategy.

Cousins Properties of Atlanta is one of the leading office property owners in Austin after more than 20 years there, with 4.8 million square feet of office space either completed or under construction. Cousins is a major developer of the Domain, a high-end complex with retail, residential and office space in the North Austin neighborhood.

Much of the city’s appeal stems from its posture as a “very socially progressive and eclectic, creative city” that benefits from being in a state with lower regulation and lower taxes, said Colin Connolly, the president and chief executive of Cousins.

Brandywine Realty Trust, the largest landlord in its hometown, Philadelphia, has operated in the Austin market for 15 years. This year, it is starting a multiyear development on a 66-acre site near the Domain. The Broadmoor campus, which is anchored by an IBM complex, is expected to be completed in about 10 years, at a cost of about $3 billion. Planners say it will infuse the area with an uptown vibe combining office, residential and retail space among at least 11 acres of parks.

The company is also nearing completion on the 405 Colorado, a 25-story office tower that will begin housing tenants this summer.

“People believe long term that Austin is on a roll and continues to be,” said William D. Redd, Brandywine’s executive vice president and senior managing director. “If you’re a big investment firm, you want a piece of that action.”

SAN FRANCISCO — Cleve Jones has lived in the Castro neighborhood for nearly 50 years, almost from the day he graduated from high school in Phoenix and … END_OF_DOCUMENT_TOKEN_TO_BE_REPLACED

A home inspection can spare you from unpleasant surprises after you buy. After crunching the numbers, searching your favorite neighborhoods, and … END_OF_DOCUMENT_TOKEN_TO_BE_REPLACED