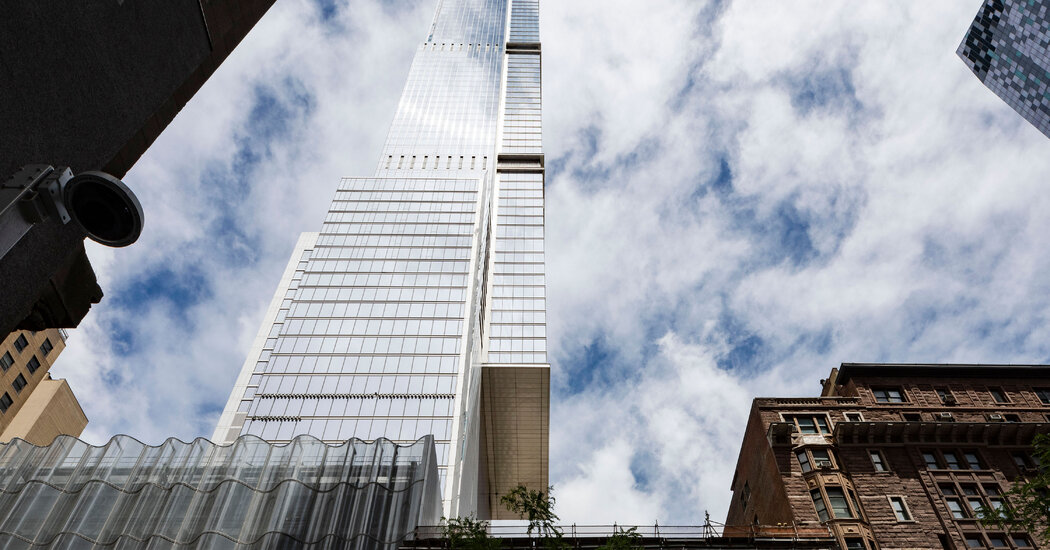 The architecture firm FXCollaborative had a similar goal when it designed Jolie, a condo developed by Trinity Place Holdings at 77 Greenwich Street in the Financial District that is nearing completion.

“We didn’t really have a height limitation, but there is the practicality of how high you want to build and how skinny you want to build,” said Matthew Messinger, the president and chief executive of Trinity Place Holdings. “This building actually tops out at a little over 500 feet, but offers extremely competitive, attractive views,” he said. “We didn’t have to build a total toothpick of a building.”

The team achieved its objective by adding a series of modest cantilevers totaling 10 feet over the landmark Dickey House to the south (which Trinity Place Holdings restored as part of a new home for Public School 150), as well as introducing a pleated facade that directs views out over the southern tip of Manhattan. “All the views were to the southwest,” said Dan Kaplan, a senior partner at FXCollaborative, “to the harbor, to the water, to the Battery itself, to the Statue of Liberty.”

Building larger floor plates at the top of the building also resulted in more floor area exactly where the developer wanted it — in larger, more expensive apartments. “It did really make the layouts at the top much better to step over the Dickey house,” Mr. Kaplan said.

A Way to Grow in a Crowded City

Confined by zoning regulations, architects and developers are using cantilevers as a creative way to gain every possible advantage in an increasingly crowded cityscape, even if it involves structural gymnastics.

By making leftover airspace habitable, cantilevers can help overcome a building site’s limitations, which makes them uniquely valuable in a city like New York where there is little vacant land left. It most cases, it’s not just about making an architectural statement — it’s about finding a way to build more, and more compelling, homes.

“What’s really great about New York City urbanism is there’s a set of rules and everybody sort of figures out a way to interpret the rules a little bit differently,” Mr. Kaplan said. “They find their clever way to work within the rules to create the skyline.”

Editor’s Note: This story is part of As Equals, CNN’s ongoing series on gender inequality. For information about how the series is funded and more, … END_OF_DOCUMENT_TOKEN_TO_BE_REPLACED

IdentityForce, a service from the credit bureau TransUnion, monitors your personally identifiable information (PII) so you don’t have to do it … END_OF_DOCUMENT_TOKEN_TO_BE_REPLACED