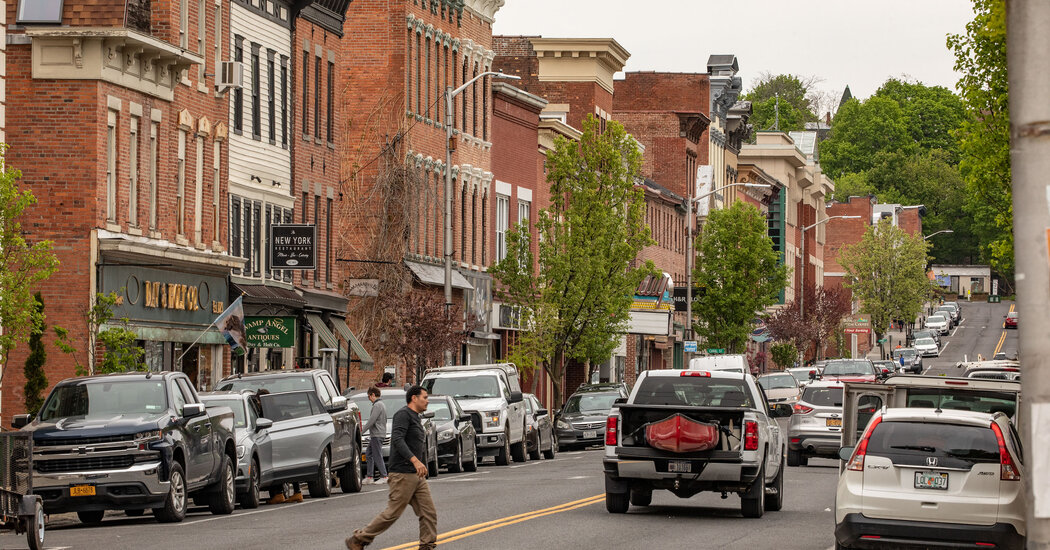 Rob Spillman and Elissa Schappell closed on their Catskill, N.Y., house, an 1840s farmhouse on 6.4 acres, in the middle of an ice storm in February. “We had to keep stopping to get the ice off the windshield wipers,” said Mr. Spillman, 57, a literary consultant and freelance writer who founded the now-defunct literary magazine “Tin House” with Ms. Schappell.

The couple, who had shared a brownstone in Park Slope, Brooklyn, with another couple for 23 years, paid $825,000 for their new home in Catskill — $25,000 below the listing price — and managed to avoid one of the bidding wars that have become the norm in much of the Hudson Valley. (They offered all cash to sweeten the deal, with plans to seek financing after the sale.)

Kingston and New Paltz. And they are much more affordable than those in Catskill’s more celebrated neighbor to the east, Hudson.

“My clients say they want Woodstock or Saugerties,” said Deirdre Day, an agent with Taft Street Realty who worked with Mr. Spillman and Ms. Schappell. “I often say, ‘If you take that money up to Catskill, you’re going to get something much, much better.’ What Elissa and Rob got in Catskill would have cost so much more in Ulster County.”

motel getting a $12 million makeover as a year-round resort, and Treetopia, a 42-acre campground transformed into upscale lodgings with Airstream trailers, luxury cottages and glamping tents.

Liam and Laura Singer moved to Catskill from Long Island City, Queens, in 2016, and opened the popular Catskill cafe HiLo the following year. “One of the things we loved about Catskill was the artistic energy,” said Mr. Singer, 40, a musician. In 2019, the couple added Avalon Lounge, a retro-style nightclub with live acts and dance parties Wednesday through Sunday.

CowParade, but with cats. From Memorial Day through Labor Day, some 50 fiberglass cat sculptures pop up along Main Street, and the event culminates with a gala and auction benefiting the Heart of Catskill Association and its efforts to revitalize the business district, which is listed in the National Register of Historic Places.

The Catskill Central School District serves about 1,350 students in kindergarten through 12th grade, according to the New York State Department of Education. The district is 66 percent white, 14 percent Hispanic, 12 percent multiracial, 7 percent Black and 1 percent Asian or Pacific Islander.

DALLAS — The rollback of abortion rights has been received by many American women with a sense of shock and fear, and warnings about an ominous … END_OF_DOCUMENT_TOKEN_TO_BE_REPLACED

The poshest place in California's Coachella Valley is The Madison Club. This exclusive gated community in La Quinta is where A-listers and tycoons … END_OF_DOCUMENT_TOKEN_TO_BE_REPLACED