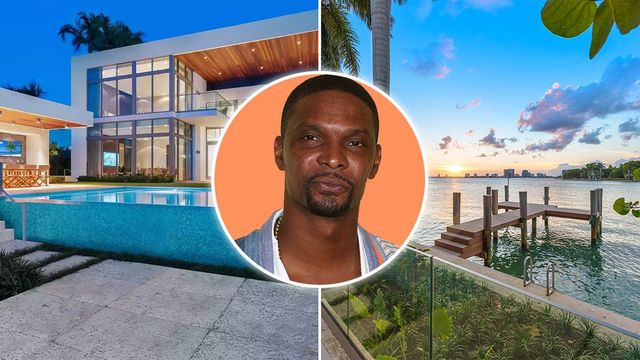 The waterfront Miami Beach mansion that the retired NBA star Chris Bosh sold earlier this year for $14.4 million is back on the market.

But Bosh’s former home isn’t just an ordinary flip. It’s now available for $42 million—nearly triple what it sold for in January.

He lived there during his tenure with the team, which ended in 2016. The following year, the 11-time All-Star listed the luxury abode for $18 million.

The new, high-flying price comes as demand for luxury South Florida homes has resulted in a surge of home flips, with record-setting prices, the Real Deal reports. However, the new price also comes with some huge changes to the property.

“The residence underwent a complete luxury renovation, with the highest-quality finishes and no detail left unturned,” says the co-listing agent, Albert Justo with The Waterfront Team at ONE Sotheby’s International Realty.

Justo represents the listing with Mirce Curkoski, also of The Waterfront Team.

Justo adds, “If you are looking to purchase on North Bay Road, there is nothing else like it on the market.”

According to the press information provided, the estate is “one of the only move-in-ready residences available” in the prestigious area.

There’s reason to believe the high-net-worth buyers will come calling.

The celebrity-packed spot is already home to Cindy Crawford and Rande Gerber, as well as Karlie Kloss and Joshua Kushner.

A sample of the fantasti Filipino food at London's Kasa & Kin and Romulo CafeKasa & KinGrowing up between the UK and US, I found it extremely … END_OF_DOCUMENT_TOKEN_TO_BE_REPLACED