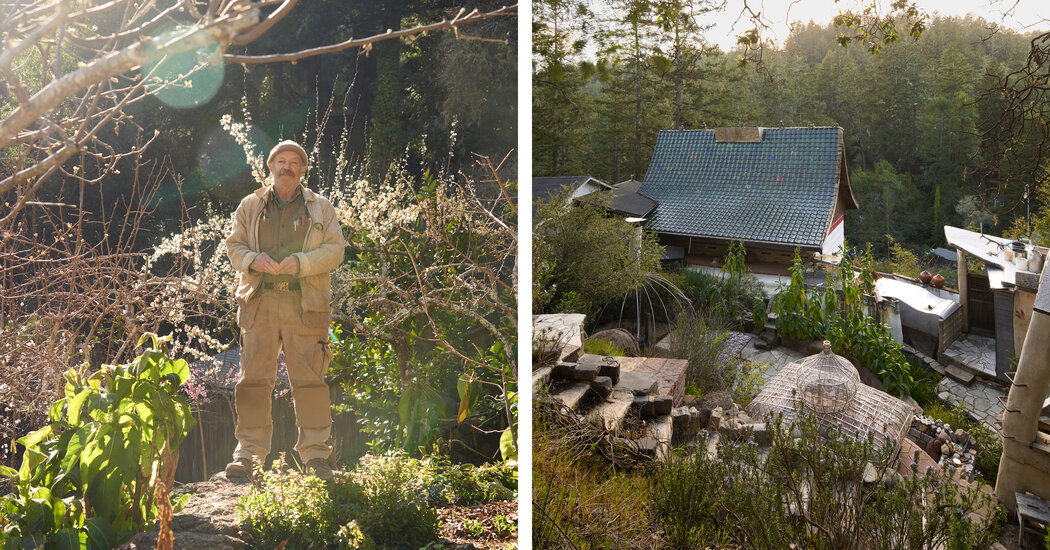 David Lee Hoffman knows the way he has chosen to live for nearly 50 years is unconventional, maybe even a little bit crazy and likely against the law.

In 1973, after years of travel abroad to avoid being drafted and sent to Vietnam, Mr. Hoffman bought two acres of land in Marin County, Calif., a lush, leafy peninsula across the Golden Gate Bridge from San Francisco.

Since then, he’s built a sanctuary to showcase his ideas about environmental sustainability: the Shower Tower, the Worm Palace (crucial to his composting toilet), the Tea Cave (where he has stored more than 50,000 pounds of rare, aged tea), the Tea Pagoda (where he’s hosted tea ceremonies for friends and dignitaries for more than 40 years) and so many more.

He calls it The Last Resort and he never had permission to build any of it. “I’ve been a scofflaw all my life,” said Mr. Hoffman, 78. “I have to recognize that.”

Marin Carbon Project, an undertaking that got a special use permit to have gray and black water systems that are currently outside the county’s building code.

a documentary about his home-based tea business. This didn’t impress the county authorities.

Landing a historic designation still appeared to be his best route. Mr. Paul, the architectural historian, believes Mr. Hoffman might qualify for state or federal landmark protection. After Mr. Hoffman appeared in The New York Times in 2012, supporters — and there are many — helped him apply for landmark status to the Marin County Architectural Commission in 2016, hoping the designation would relieve him of some of the fines by applying the more lenient State Historical Building Code. The state code is designed to help preserve historic or unique structures.

The Last Resort became the first community-based project the commission had ever considered. “It provides some latitude,” said Martin Zwick, one of the six commission members who voted in favor of Mr. Hoffman. “David’s property is a great labor of love, but it will be very costly to bring it up to code, even the historical code.”

Mr. Kinsey said that before they could proceed, Mr. Hoffman was still obliged to pay the pre-existing fines — charges disputed by Mr. Hoffman and his supporters because it still had not been determined what was exempt.

AUSTIN, Texas--(BUSINESS WIRE)--As the first multifamily management company to be recognized in the Public Relations and Marketing Excellence Awards, … END_OF_DOCUMENT_TOKEN_TO_BE_REPLACED

There have been whispers of cooling housing and rental prices in the San Francisco Bay Area, but that hasn't yet translated into practical, noticeable … END_OF_DOCUMENT_TOKEN_TO_BE_REPLACED

Cars pass in Independence Square at twilight in Kyiv, Ukraine, Monday, Oct. 31, 2022. Rolling ... [+] blackouts are increasing across Ukraine as the … END_OF_DOCUMENT_TOKEN_TO_BE_REPLACED