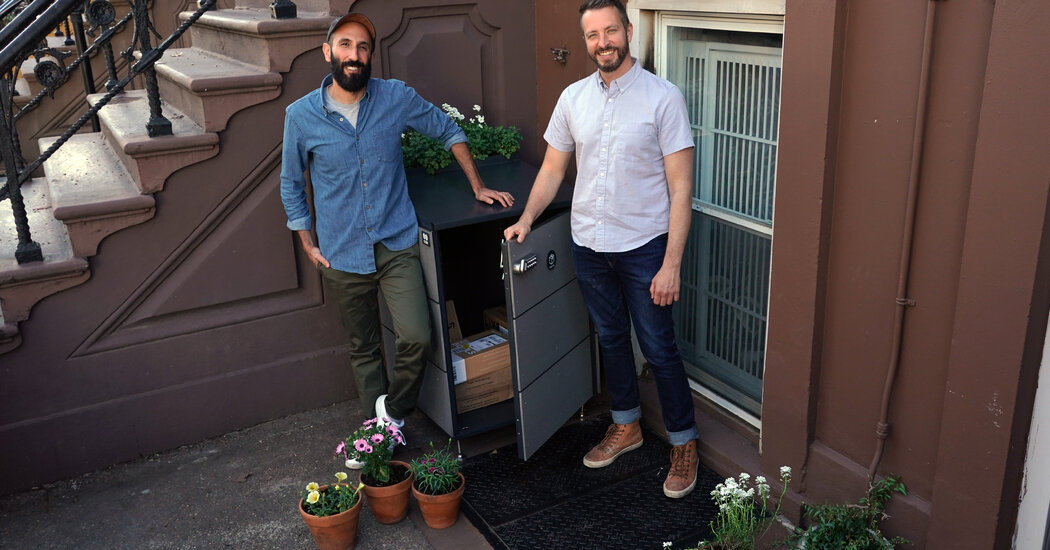 Shortly after moving into their renovated brownstone in Bedford-Stuyvesant, Brooklyn, at the end of 2019, Jordan Slocum and Barry Bordelon began experiencing a problem that now consumes many urban dwellers: package theft.

“It was three or four packages, over the course of a few months,” said Mr. Bordelon, 40.

The issue was compounded when Mr. Slocum and Mr. Bordelon, who work together as renovation bloggers and project managers under the name Brownstone Boys, began accepting deliveries for some of their clients’ renovations.

“It was becoming quite stressful,” said Mr. Slocum, 38. “We’d be at meetings and get a UPS notification, and have to leave immediately as we knew there was a thousand dollars’ worth of product sitting on our stoop.”

They weren’t alone. In 2019, an analysis conducted for The New York Times found that 1.7 million packages are stolen or go missing across the country every day, with 90,000 packages disappearing in New York City alone. In 2020, 43 percent of respondents to a national survey conducted by C & R Research reported being victims of package theft, up from 36 percent in 2019.

ParcelBin (from $695), a lockable parcel delivery box made by CitiBin, a Brooklyn-based company that got its start making enclosures for trash and recycling.

Parcel Lockbox S100 (about $60) and ParcelWirx plastic tubs from RTS Home Accents (from about $122).

Successful implementation of any of these units requires asking delivery companies to use them, and sharing the combination. Typically, users share their combinations via online profiles with companies like Amazon.com, UPS and FedEx.

ParcelDrop ($445), this past December. Bob Box is another made-in-Brooklyn solution (from $275). Other companies, like Architectural Mailboxes, based in Redondo Beach, Calif., and dVault, based in Colorado Springs, Colo., have been making them for years.

Full Service Vault ($899) that can handle both mail and packages. “Other competitors try to have a locking mechanism with a code; however, you need to get compliance from all these agencies that are used to their ways,” he said. “We have a simplified security drop door.”

Sales at dVault had been growing about 10 to 15 percent per year until 2020, Mr. Clark said, when they jumped about 100 percent after the pandemic took hold.

Whether homeowners choose a drop box, select an extra-large bin or just add a combination padlock to a crate they make themselves, having a secure place for packages when no one’s home is surprisingly liberating, Mr. Bordelon said.

“I know it sounds crazy, but it’s actually been sort of life-changing,” he said of his ParcelBin. “It relieves so much stress.”

Three men were indicted in the death of the notorious gangster James (Whitey) Bulger, who was beaten to death four years ago in a West Virginia … END_OF_DOCUMENT_TOKEN_TO_BE_REPLACED

Dr. Connolly and Dr. Mott live in the North Baltimore neighborhood of Homeland, known for its strong public schools and colonial architecture, which … END_OF_DOCUMENT_TOKEN_TO_BE_REPLACED