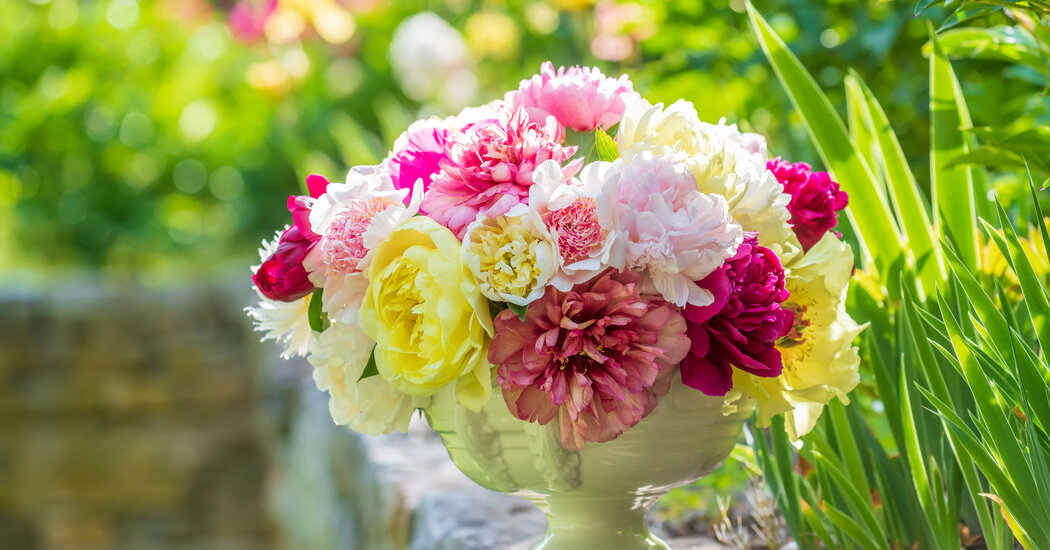 “The garden starts orange,” Kathleen Gagan was saying the other day, sounding as if she were talking about a summertime bed of daylilies or lilies, or maybe one of marigolds.

The subject, though, was peonies — specifically, the acres and acres of the familiar herbaceous garden varieties at Peony’s Envy, Ms. Gagan’s nursery in Bernardsville, N.J., where white and shades of pink predominate for several weeks in the spring, but are far from the whole story.

In the 16 years since she opened the nursery, her customers have often begun conversations by telling her that they want only pink and white blossoms. “And only three-foot-tall peonies with big, full flower forms,” she said.

You could obsess over anemone-shaped flowers like the pale pink Do Tell or the magenta Sword Dance, which are light on the full-size outer guard petals but heavy on the powder puff of feathery petaloids at the center.

Or maybe most tempting: flowers that you’ll want to bury your nose in — varieties with “dense fragrance,” as Ms. Gagan calls it. In some varieties, scent has been sacrificed in breeding for stronger stems or earlier blooming, but that’s not the case with the rich pink Edulis Superba, the cloudlike white Amalia Olson or Mrs. Frank Beach. Each one is a delicious standout.

And there’s another bonus for the gardener. Whichever of the thousands of named varieties of peonies you choose, they won’t attract deer and rabbits. Like the Narcissus and Iris that Ms. Gagan grows alongside peonies at the nursery — not for sale, but for pure pleasure — they are rarely damaged.

Soon after Herschel Walker, the former football star, announced he would run for U.S. Senate in Georgia as a Republican, his son Christian appeared … END_OF_DOCUMENT_TOKEN_TO_BE_REPLACED

SpaceX launched four people to the International Space Station from Florida on Wednesday, as Elon Musk's company keeps up a steady pace of crewed … END_OF_DOCUMENT_TOKEN_TO_BE_REPLACED