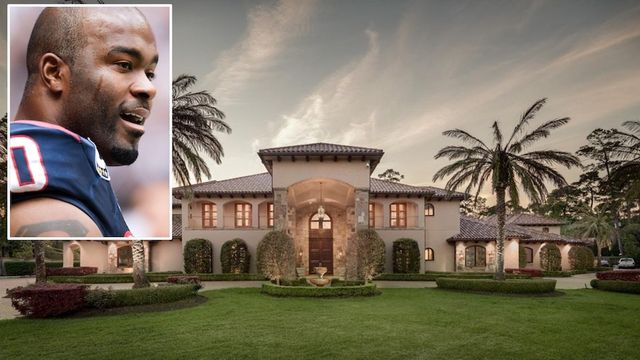 The former NFL defensive end Mario Williams has tossed his Houston mansion onto the market. His grand home can now be yours for $8.45 million.

The first pick in the 2006 NFL Draft purchased the swanky spot for $6.25 million in 2007, after his rookie season with Houston Texans. He had the dough to spend—he signed a six-year, $54 million contract with the Texans shortly after being drafted.

“Own a piece of NFL history,” the listing trumpets. And aside from its sports connection, the estate is quite an eyeful.

The floor plan boasts dramatic staircases, vaulted ceilings, and a palatial layout. The Old World style combines modern finishes, such as the top-of-the-line appliances in the huge kitchen, with travertine and marble, wood cabinets, and a breakfast room.

Just adjacent, a family room with a stone-surround fireplace features exposed, beamed ceilings and floor-to-ceiling windows. The home also has a formal living room with a fireplace and built-ins, and a separate formal dining room with chandeliers.

Other perks include an office, a bar, climate-controlled wine room, and a home theater with tiered seating. A billiard-room is decorated with Williams’ sports memorabilia.

The primary bedroom suite features a stark white dressing room with 360-degree mirrors, and has two custom closets, one with wood shelving, the other with white built-ins, topped with a glitzy chandelier.

The en suite bathroom, with dual vanities and a separate tub and shower, is also monogrammed with the letter “W” on the floor.

A third story features a flexible space with a self-contained guest apartment, as well as open space that could be used for a gym, playroom, or workspace.

first defensive player in NFL history to sign a $100 million contract, back in 2012.

BOGOTÁ, Colombia — A prominent former commander of Colombia’s largest guerrilla group, who was known by the nom de guerre Jesús Santrich, has been … END_OF_DOCUMENT_TOKEN_TO_BE_REPLACED

RAMALLAH, West Bank — Hundreds of thousands of Palestinian citizens of Israel stopped work for the day on Tuesday, as did other Palestinians across … END_OF_DOCUMENT_TOKEN_TO_BE_REPLACED