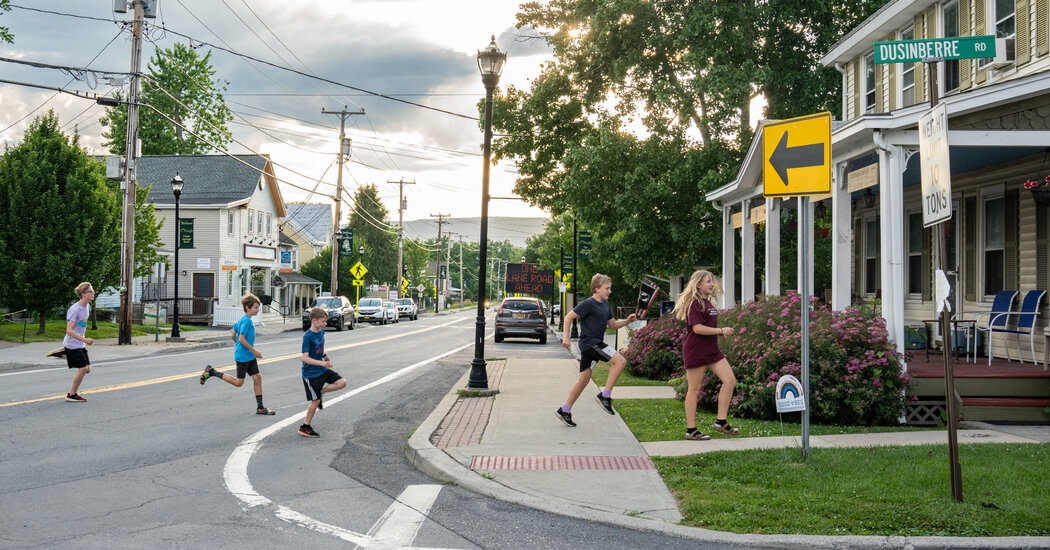 When Laura Phillips was planning her retirement after 30 years of teaching art to elementary school students and living in Seaford, N.Y., on Long Island, she and her husband started looking for a more tranquil place to live.

“We wanted to move someplace less populated with less traffic,” Ms. Phillips, 58, said. “Every year, for 20-something years, we’ve gone up to Mohonk Mountain House for a weekend, and it came to me that we’re the most relaxed and the most content when we’re in those mountains.”

Kingston, N.Y., is among the reasons New Yorkers are flocking to Gardiner, which is also prized for its wide-open spaces. Although the actor Robert De Niro’s 98-acre Gardiner compound is an extreme example, the town is known for expensive homes surrounded by acres of farmland.

“There are big properties that haven’t yet been subdivided into smaller developments,” said Steven Asher Cohen, an associate broker with Berkshire Hathaway HomeServices who recently represented a New York City client on the purchase of a modern farmhouse on 34.5 acres for $1.625 million. “The village is small, but it’s only about six miles to New Paltz. People like the easy access to the Thruway and a little bit of a shorter drive to the city.”

Hyde Park, N.Y. “After climbing in the Gunks since I was in college, and always wanting to live there full-time, we decided life was too short to put off living where we wanted to be.”

For Ms. Pazer, Gardiner is all about the Gunks. “I’m so focused on the recreation,” she said. “It’s nice to live in a place where you can hike, cross-country ski and climb — all these things are right here.”

Mr. De Niro’s fight with the town over his tax bill did little to lower his profile there.

The compact commercial district has only a few businesses, but each has a distinct character. Gardiner Liquid Mercantile serves craft cocktails and housemade apple brandy in a hip atmosphere. Julian’s Provisions offers sophisticated lunch options like shrimp salad on toasted brioche, and the brunch spot Cafe Mio is known for its fresh local ingredients.

The town has an active community of artists who hold an annual Open Studio Tour of some 20 artists’ studios. Ms. Phillips, the retiree who relocated from Long Island, is also an artist and plans to participate in the tour next year. She was thrilled to meet several artists living on her road, she said: “I met them just by walking the neighborhood.”

New York State Legislature created Gardiner from parts of New Paltz, Rochester and Shawangunk in 1853, naming it after Addison Gardiner, lieutenant governor of New York from 1845 to 1847. The town soon became known for its dairy farms and millstones formed from the mountains’ quartz-rich rocks.

Whether you optimistically hope that mortgage rates will decline or are resigned that rates will stay elevated above the historic lows of 2021, you … END_OF_DOCUMENT_TOKEN_TO_BE_REPLACED

A resident of Nikopol, Ukraine, in her backyard last month, with smoke rising from an area on the opposite bank of the Dnipro River. Credit...David … END_OF_DOCUMENT_TOKEN_TO_BE_REPLACED