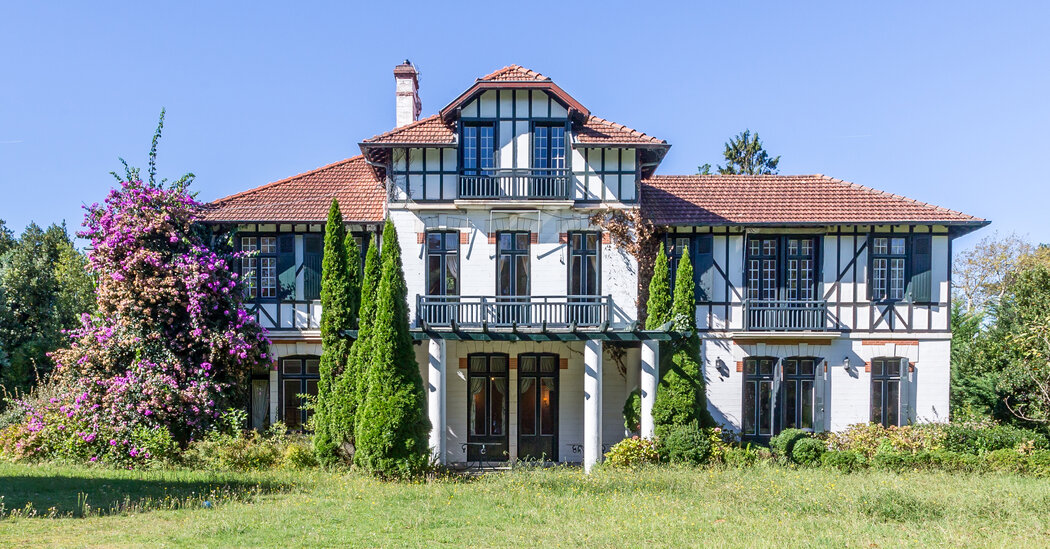 A Nine-Bedroom Villa in Southwest France

This nine-bedroom, Neo-Basque-style villa sits on a grassy 1.85-acre lot in Winter Park, a quiet residential district outside of downtown Biarritz, the resort town on France’s Basque coast, near the border with Spain.

Built in 1920, the 6,458-square-foot house was last renovated in the late 1990s, and has been unoccupied for five years. “You have to do some renovation work,” said Philippe Thomine-Desmazures, associate director of Barnes International Realty, Côte Basque, which has the listing.

A gravel driveway leads to the covered front portico. The entry hall has a checkerboard tile floor and a powder room. Double wood doors open to a parlor with high ceilings, a terra-cotta tile floor and a broad fireplace. French doors with transoms lead to the garden.

Eugénie, visited in 1854. It has long been considered the surfing capital of France.

Biarritz Pays Basque Airport, with flights to eight European countries, is a three-minute drive from the house. San Sebastián, the closest city in Spain, is a 30-minute drive.

Before the pandemic, most sales in Biarritz were for second homes used during high season, from April to October, when the population often quadrupled. “Biarritz and the area have been very sought after for secondary residences since Imperial times,” said Bénédicte Marchal, director of Biarritz Sotheby’s International Realty. “A lot of people from the aristocracy like to be in Biarritz.”

But since 2020, as in resort towns worldwide, the market has skewed younger. “We have seen many, many people between 35 and 45 move here to work remotely, or to go to work two to three days a week in Paris, Madrid or London and come back,” said Mr. Thomine-Desmazures, the listing agent. “We saw many, many people who moved their family here. It was a booming market with Covid.”

Those newcomers found a cramped seller’s market with surging prices. In the past few years, only small buildings with 10 to 15 apartments have been built in Biarritz, and approvals are had to come by. “It is difficult to knock down and build something new,” Mr. Thomine-Desmazures said.

Local officials and housing advocates worry about what the damaged housing stock will mean for people with low wages or fixed incomes. In interviews, … END_OF_DOCUMENT_TOKEN_TO_BE_REPLACED