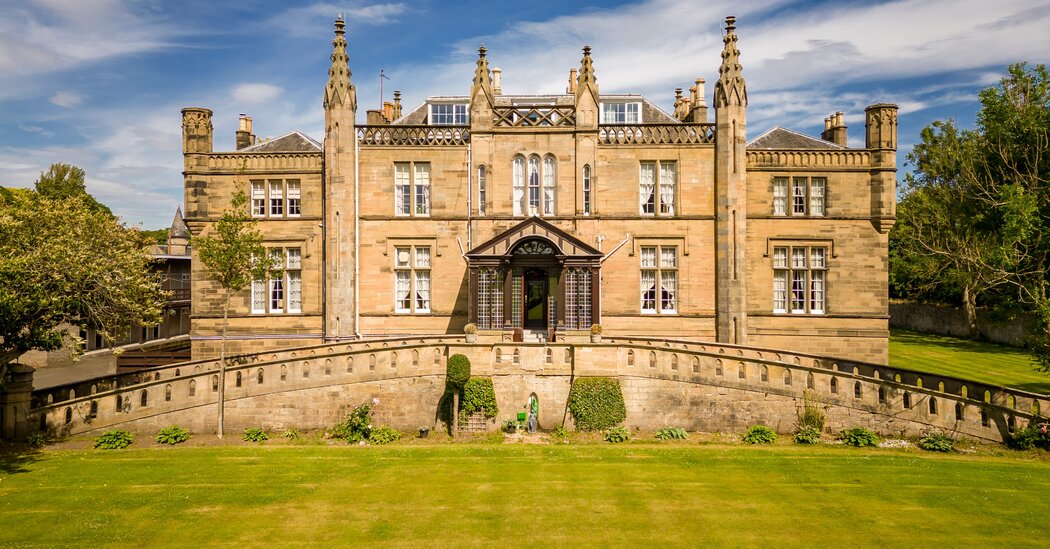 A Historic Hotel Between Glasgow and Edinburgh

Built in the 16th century and rebuilt 300 years later, this 12,798-square-foot manor house sits on the outskirts of Falkirk, a town in the central Scotland county of Stirlingshire.

The house, known as Powfoulis Manor, anchors a 17-acre estate near the River Forth that also comprises several outbuildings including stables, a workshop, garage, two-bedroom staff cottage and guest wing with 16 bedrooms built in the early 1970s.

The property has been sold just twice in five centuries, said Harry Maitland, a director at Savills UK in Kinross and the listing agent. Since 1952, the current sellers’ family has lived on the second floor and operated a hotel out of the manor house’s lower levels.

Caledonian Sleeper train from Stirling rail station, about 10 miles northwest of the property.

“The market is cooling off after being on fire,” said John Boyle, director of research and strategy at the Rettie & Co. real estate agency in Edinburgh, though a shortage of available homes has kept prices high. “The number of applicants in our Edinburgh office is up 60 percent from prepandemic levels,” he said, “but new housing supply is up only 20 percent. People have to bid at higher levels to secure a property, which drives up prices.”

The result has been a wave of cautious buyers, said David Mackie, founder and owner of Endrick Property in Blanefield. “There’s so much negativity in the news, it’s cooling demand,” he said. “The days of cheap money are long behind us.”

Allen & Harris Estate Agents in Glasgow. “A lot of them are preapproved for mortgages, but by the time they find a house, rates have gone up, and they have to reassess what they can afford,” he said. “Factor in energy hikes, which may total £5,000 or more, and there’s pressure at the lower end of the market.”

statistics, the average price of a detached home in Scotland was £353,025 ($407,000) in June, up about 17 percent from the same time last year. The Orkney Islands, an archipelago off Scotland’s northeastern coast, experienced the nation’s largest increase in average property prices over the past year, at 29 percent. The most expensive area was the City of Edinburgh, where the average cost was £327,000 ($377,000).

While “purse strings are tightening a bit, we’re still seeing lots of positive interest in estates and country properties — demand is robust,” said Tom Stewart-Moore, head of rural agency for Scotland at Knight Frank in Edinburgh. “The rural estate market is fairly resilient to lumps and bumps in the economic climate.”

Turcan Connell in Edinburgh, who works with many foreign clients, said that buyers from the Middle East and Asia were “interested in rural properties, while the Dutch and French like to buy estates, and Scandinavians are attracted by forestry. Golf is a big attraction for Americans.” English buyers “remain very common,” he said. “You can sell a city-center apartment in London, buy a huge country house in Scotland and pocket the difference.”

Most homes in Scotland sell through a blind bidding system, with sellers setting a minimum asking price and prospective buyers submitting sealed bids through lawyers. “It’s great for sellers, because it can drive up the price, but buyers are bidding into the abyss of the unknown,” he said. “Especially since Covid, rural properties are going way over their formal appraisals.”

Buyers are permitted to assign power of attorney to lawyers, so they don’t have to be there in person to complete a sale, Mr. Dunlop said, adding that there is “no difference” in the process or tax obligations for Scottish or foreign buyers.

Land and Buildings Transaction Tax, with a top rate of 12 percent, applies to all property and land purchases over £145,000 ($167,000), according to Alan Dean, director of the personal tax practice at the Chiene + Tait accounting firm in Edinburgh. Scotland “does not penalize or apply higher rates for foreign buyers, unlike England,” he added. Since 2016, an additional 4 percent tax has been imposed if a buyer already owns a home anywhere in the world.

Capital gains taxes are the same for Scottish and foreign buyers, Mr. Dean said, with a maximum rate of 28 percent. Sellers must report property sales to HM Revenue and Customs, the U.K. tax authority, and pay capital gains taxes within 60 days of a transaction.

Broker commissions in Scotland range from 1 to 2 percent, but “many agents are going lower to secure business, so 0.75 percent is not unusual,” Mr. Mackie said. “And I know agents who are prepared to accept 0.5 percent.”

Council tax for Powfoulis Manor totals £1,753 ($2,019), according to Barry Grant, an assessor at Central Scotland Valuation. The hotel has been assessed separately at business tax rates. “For a new owner, business tax rates could apply to uses like Airbnb or holiday rentals,” he said.

Hometown Deli, Paulsboro, N.J.Mike Calia | CNBCThree men were charged with fraud and other crimes in a scheme involving a company that was worth $100 … END_OF_DOCUMENT_TOKEN_TO_BE_REPLACED

The childhood home of "The Morning Show" actor Nestor Carbonell recently hit the market in Greenwich, CT, for $4.4 million.Fans will appreciate that … END_OF_DOCUMENT_TOKEN_TO_BE_REPLACED