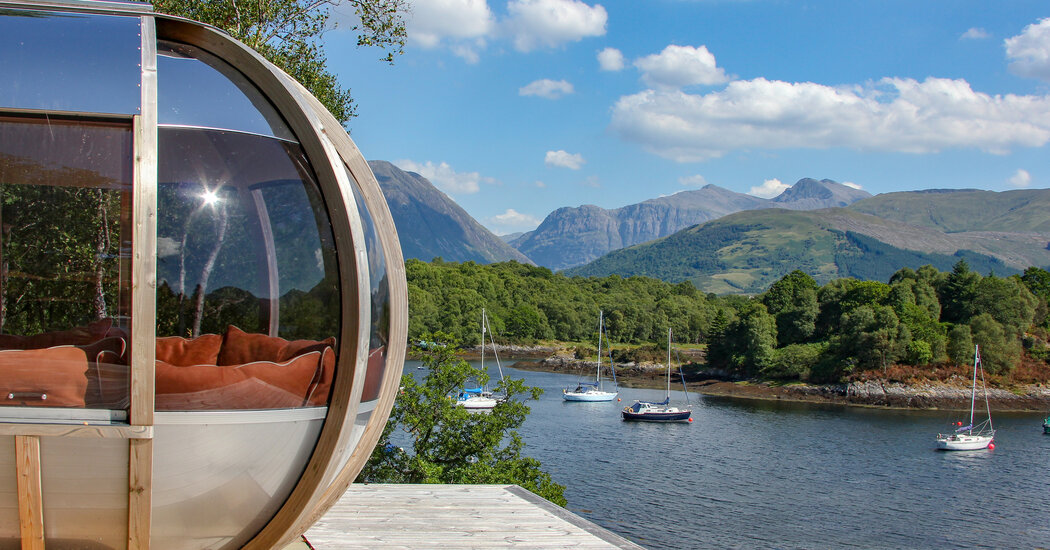 A Historic Five-Bedroom Home on a Scottish Loch

This five-bedroom house, in the Arts and Crafts style with Swiss influences, sits on the banks of Loch Leven near the village of Ballachulish, in Scotland’s West Highlands.

The 5,183-square-foot marmalade-toned stone home, called Dunbeg House, was completed circa 1903 by Bishop Alexander Chinnery-Haldane, the Episcopal Bishop of Argyll and the Isles, for his eldest son. The four-story main house, designed by the Inverness architects Ross & Macbeth, is listed with Historic Environment Scotland for its distinctive blend of Arts and Crafts and Swiss Alpine architectural styles, said David Twist, who owns the home with his wife, Helena.

“The bishop, being wealthy, traveled extensively in Europe with his wife, and they were quite fascinated by Swiss architecture,” Mr. Twist said. “And it was also the peak of the Arts and Crafts movement, so the building has features from a Swiss chalet and from the Arts and Crafts style. It’s the only house of its kind in Scotland.”

The Highlands region, with its vast swaths of land, towering mountains and dramatic coastline, has been popular in recent years with affluent buyers seeking privacy on landed estates, along with second-home buyers, many from London, seeking a more rural life.

The pandemic, which shuttered the Scottish property market from March to late June 2020, intensified those drivers when business resumed, agents said.

“The market lockdown resulted in huge pent-up demand, coupled with a re-evaluation of people’s lifestyles and priorities, which only drove the desire to move,” said Suzanne Moss, a senior associate director in Strutt & Parker’s Inverness office. Last year, she said, the firm transferred ownership on “about a year’s worth of sales in a much shorter period of time.”

Sales further accelerated this year, with the pandemic “completely transforming the way that people want to live, and where they want to be,” said Tom Stewart-Moore, the head of rural agency at Knight Frank Edinburgh. “We’re seeing a lot of people moving out of towns and cities.”

“Threats of new coronavirus strains have only increased the focus on Scotland as a desirable place to be,” Ms. Moss said. “Here you can achieve tremendous value for money, and because the landscape is less densely populated than elsewhere, it’s particularly attractive.”

GREENVILLE, N.C.--(BUSINESS WIRE)--Employers aiming to win the war on talent have a new “A” team to tap into: college and professional athletes. … END_OF_DOCUMENT_TOKEN_TO_BE_REPLACED

Mortgage rates are likely to rise in July, extending a seven-month streak. High inflation, and the Federal Reserve's efforts to control it, have … END_OF_DOCUMENT_TOKEN_TO_BE_REPLACED