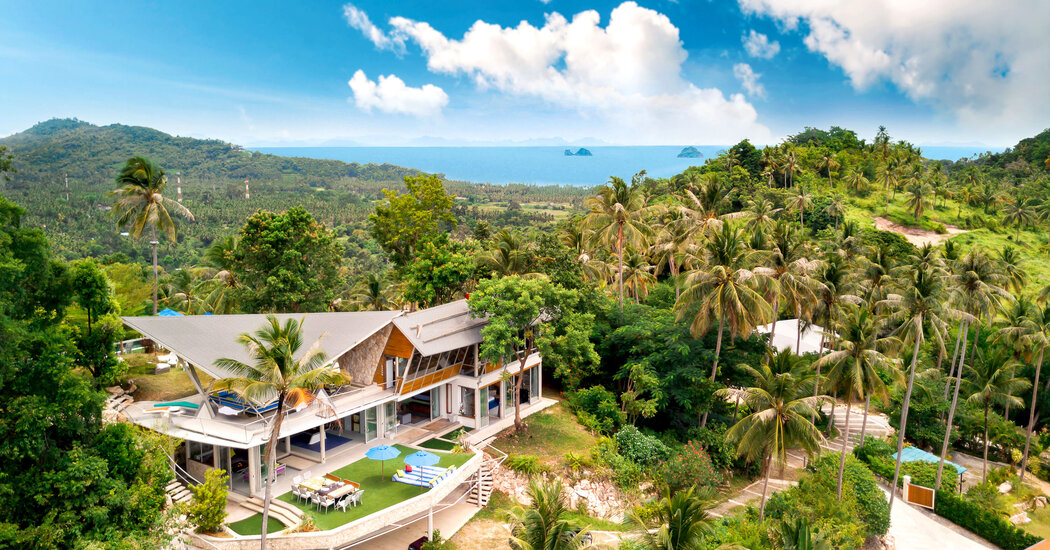 Five Airy Bedrooms Off the Coast of Thailand

This contemporary five-bedroom house sits on two hilltop acres in Taling Ngam, offering panoramic views of the Gulf of Thailand from the island of Koh Samui, 10 miles off the southeast coast of Thailand.

Called Quartz House, the three-story home is built into the rock with seams of crystalline quartz forming the interior walls of rooms on the first and second floors, said the owner, Hugh Kingsley-Heath, who designed and built the house, completing it in 2015.

The top floor of the 8,611-square-foot house is largely open-air, including two pavilions topped with angled wood roofs supported by V-shaped columns.

Bank of Thailand, from 2008 to 2018, Thai housing prices rose overall by 46.2 percent, then increased another 5.3 percent year over year in 2019. Despite the global pandemic, which slowed sales among both domestic and foreign buyers, the price index continued to grow for the most part in 2020, climbing 3.3 percent year over year for detached single-family homes in the second half of the year. However, the condominium market saw prices decline 3.1 percent in the second half of 2020 compared with a year earlier.

The poshest place in California's Coachella Valley is The Madison Club. This exclusive gated community in La Quinta is where A-listers and tycoons … END_OF_DOCUMENT_TOKEN_TO_BE_REPLACED

KOROPY, Ukraine — Four men tugged at long strips of fabric to lift a coffin out of the gaping hole in the backyard of a small house. They flung the … END_OF_DOCUMENT_TOKEN_TO_BE_REPLACED