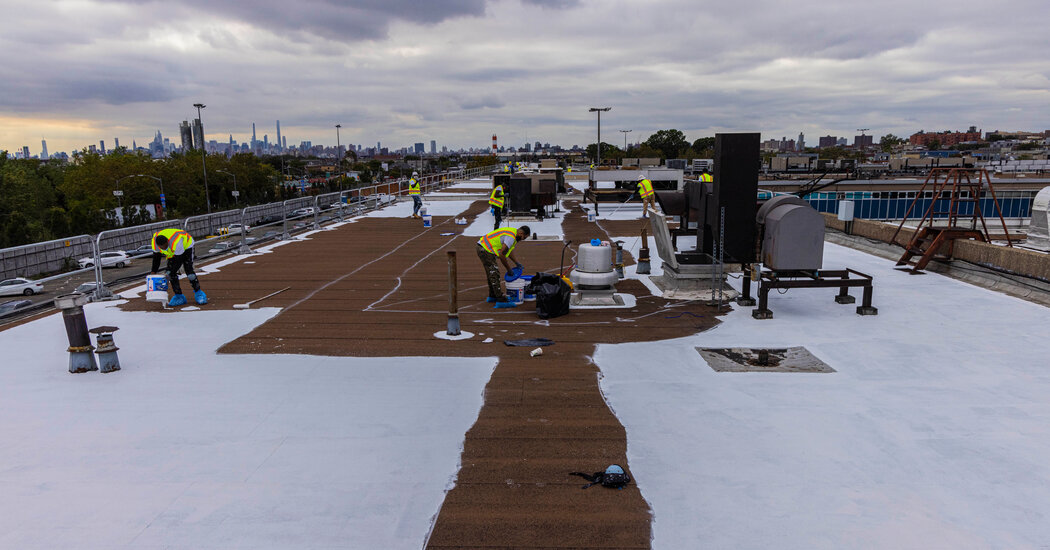 Last summer, New York City endured three heat waves and many days when the temperature climbed above 90 degrees. In some neighborhoods, like the Hunts Point section of the South Bronx, which ranks as one of the city’s most vulnerable areas to heat, extreme temperatures actually linger, contributing to increases in heat-related illness and deaths.

This sweltering effect can be attributed to the built environment, with its lack of protective tree shade and swarms of traffic and surroundings cramped with glass, asphalt, metal and concrete. Installing cool roofs, which involves lightening the surface color of rooftops to reflect and not absorb heat, can temper excessive heat from the top down and reduce the urban heat island effect — a common and adverse consequence of climate change where air temperatures are significantly higher in a city than in surrounding areas, even at night.

The Hunts Point Produce Market, the country’s largest wholesale produce market and a longtime mainstay in the borough, took a step toward climate action in October, coating about 30,000 square feet of its dark 800,000-square-foot roof with a material known as Elasto-Kool 1000, a white paint infused with silicone to reflect solar heat and UV rays and decrease indoor and surface temperatures during summer months.

The coated roof is expected to help cut down on the energy use for air-conditioning, reducing the amount of greenhouse gases expelled into the atmosphere. The remainder of the roof is expected to be coated in 2022 or later, depending on the availability of funds.

NYC CoolRoofs and was being completed by workers of the HOPE Program, a nonprofit organization which provides job training and professional development resources to New Yorkers seeking opportunities in climate-focused industries. To date, CoolRoofs, in partnership with city agencies and grant funding from the Environmental Protection Agency, has covered more than 10 million square feet of rooftops since 2009.

Cool Neighborhoods NYC, furthering a strategy that would focus on locations with the highest scores on a heat vulnerability index, such as some neighborhoods in Brooklyn and the Bronx.

Under the 2019 Climate Mobilization Act, New York City mandates that new roofs feature reflective surfaces and, if eligible, solar panels or a green-roof system. The NYC CoolRoofs program, which supports the city’s goal to reduce carbon emissions by 80 percent by 2050, offers free installations on affordable housing and buildings that house nonprofits, and low-cost installations to other buildings willing to cover the cost of coating materials.

coolroofs.org, or on dsireusa.org, the Database of State Incentives for Renewables and Efficiency.

Many property purchasers in Alaska possess the same vision: Either hunker down away from the madding crowds in a refined log cabin or operate a … END_OF_DOCUMENT_TOKEN_TO_BE_REPLACED

YORK, England — Pints in hand, a group of men sat hunched over chessboards under the sloping ceiling beams of the Eagle and Child pub in York, in … END_OF_DOCUMENT_TOKEN_TO_BE_REPLACED