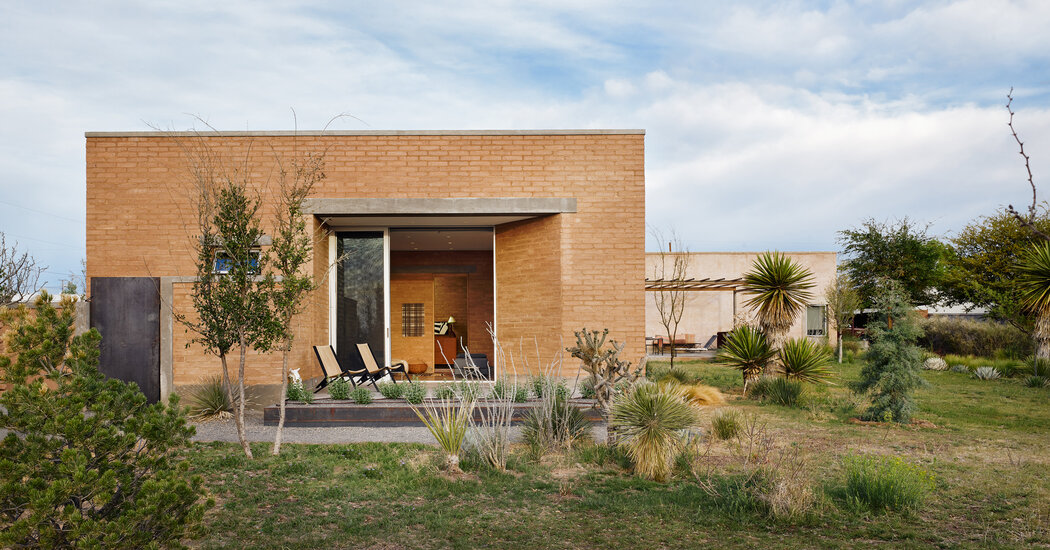 When Terry Mowers first encountered the dry, dusty landscape of Marfa, Texas, in 2006, he sensed his life was about to change.

“It was just a very, very special place,” said Mr. Mowers, 66, a textile-design consultant who was awe-struck by the vast desert, the big sky and the legacy of the artist Donald Judd. “And I fell in love.”

Within days, he decided he needed a home there, a remote getaway from his primary residence in Manhattan. He contacted a real estate agent and, before he returned to New York, found a house he wanted to buy: a partially built modernist box of adobe brick designed by the architecture firm Rael San Fratello.

Ranch Dressing, a Marfa store that sells vintage Navajo rugs and sterling silver jewelry, married in 2016. For a few years, they commuted between Marfa and Chattanooga, Tenn., for Mr. Mowers’s work. But as they planned to settle in Marfa together, the couple faced a few issues with the adobe house that needed to be resolved.

The exterior walls were finished in mud and straw that protected the bricks, but the coating sloughed off during storms and had to be constantly reapplied. “The mud would just wash away in the rain,” Ms. Thorsen said, adding that sometimes after a storm, “you couldn’t even open the door because there was so much mud on the ground.”

“We experienced a number of years of just resurfacing the outside of the house,” Mr. Mowers said.

They eventually covered the house in a more durable lime plaster. Then it was on to the next glaring problem.

Dust, an architecture firm based in Tucson, Ariz. But they didn’t want an addition; instead, the owners and architects agreed to leave the original house alone and build a new structure reached by an outdoor path.

“The house that was there — sort of a long bar with an internal courtyard — is really a profound piece, so we didn’t want to scab onto it,” said Jesús Edmundo Robles Jr., a founding principal at Dust. “The natural response was a reverence to that.”

Positioning a new 1,200-square-foot building about 36 feet away from the house, Mr. Robles and his partner, Cade Hayes, sought to reflect some of the aesthetic cues from the existing structure while adding spaces that would improve the livability of the whole compound.

The union movement that kicked off across the country more than a year ago has continued its momentum in 2022, with workers in warehouses, coffee … END_OF_DOCUMENT_TOKEN_TO_BE_REPLACED

Keep up! Reality TV star Kim Kardashian has splurged on a cliffside mansion in Malibu, CA, that was once owned by Cindy Crawford and Rande … END_OF_DOCUMENT_TOKEN_TO_BE_REPLACED