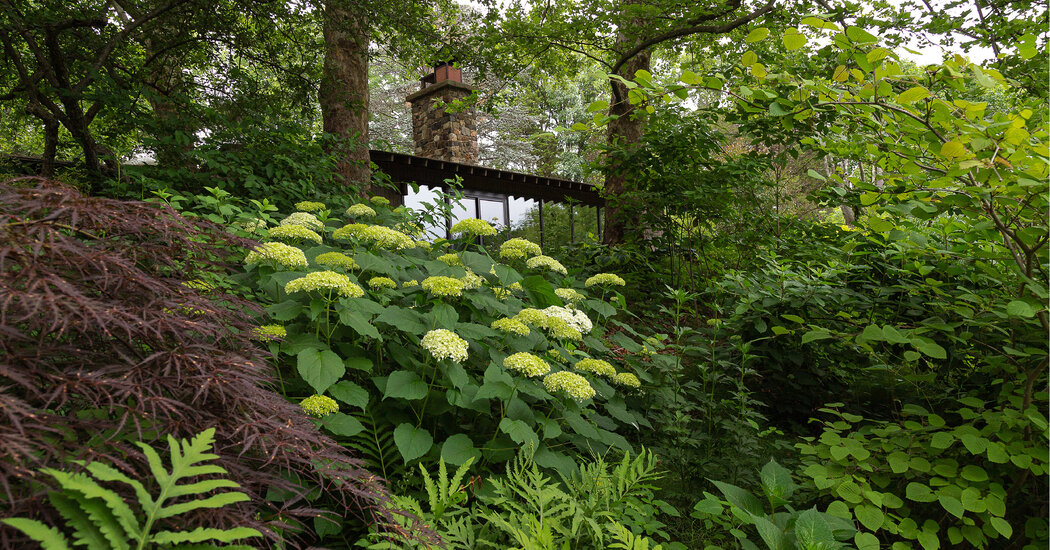 “A real wasteland.” “A derelict wood.” And: “Sort of frightening.”

Hearing James Golden recount those early impressions of the land from which he has coaxed his celebrated garden, Federal Twist, one has to ask: Why did you ever buy such a place?

It was the midcentury house in western New Jersey that charmed Mr. Golden: a long, low two-bedroom perched atop a 12-foot bank. But even on that first day in 2004 when he viewed it with a real estate agent, glimpsing the terrain beyond from the wall of windows inside the weekend-home-to-be, he could see the obstacles. A dense stand of Eastern red cedars (Juniperus virginiana) seemed to want to engulf the house. Below the bank, trees tangled with invasive multiflora rose in a daunting world underpinned by rough, heavy, wet clay soil.

There could be no traditional garden here, he knew instinctively, even before he fully grasped just how tricky a spot it was. Any notion of imprinting beds and borders by traditional methods must be surrendered, and fast.

Sunday, June 12). It was featured in 2020 on “Monty Don’s American Gardens,” for BBC Two. And it is the subject of Mr. Golden’s recent book, “The View From Federal Twist: A New Way of Thinking About Gardens, Nature and Ourselves.”

In his mind’s eye were images of the gardens of the Dutch landscape designer Piet Oudolf, too, emphatic sweeps of grasses and flowering perennials with multiple seasons of presence. But those gardens, he knew, had not been made in the muck — not in soil like his, where any hole you dig remains filled with water for days.

“It had to be an ecological garden, almost by default,” he said. “I had to figure out what I could grow — plants that were adapted to this ecology. I would almost say I was dragged kicking and screaming to the term ‘ecological garden,’ because I could think of no other term to describe what I had to do.”

He had to match the plants to the place.

Noel Kingsbury, the British naturalistic garden designer and writer who collaborated on books with Mr. Oudolf, had stuck.

“Noel had written about planting directly into rough grass,” Mr. Golden said. “About making a kind of rough prairie by digging big holes and planting big, competitive plants right into it.”

The hope was that they would settle in and shade out some unwanted undergrowth, with the desired plants gradually getting an edge.

And so the experiments began. The new clearing was mowed, and in went the first trial plants, many of them prairie natives from those inspirational books. Not all of them could handle the conditions, though, and what did survive wasn’t adding up to a garden.

It was more like “a developing chaos,” Mr. Golden said. “I basically had a mowed field with a wild array of plants growing in it.”

Daniel Acker | Bloomberg | Getty ImagesHome prices are softening in most markets across the nation.Yet home prices are still higher compared with a … END_OF_DOCUMENT_TOKEN_TO_BE_REPLACED

Joel Silver has been responsible for some of Hollywood's biggest franchises, including "The Matrix," "Die Hard," "Predator," and "Lethal Weapon."So … END_OF_DOCUMENT_TOKEN_TO_BE_REPLACED