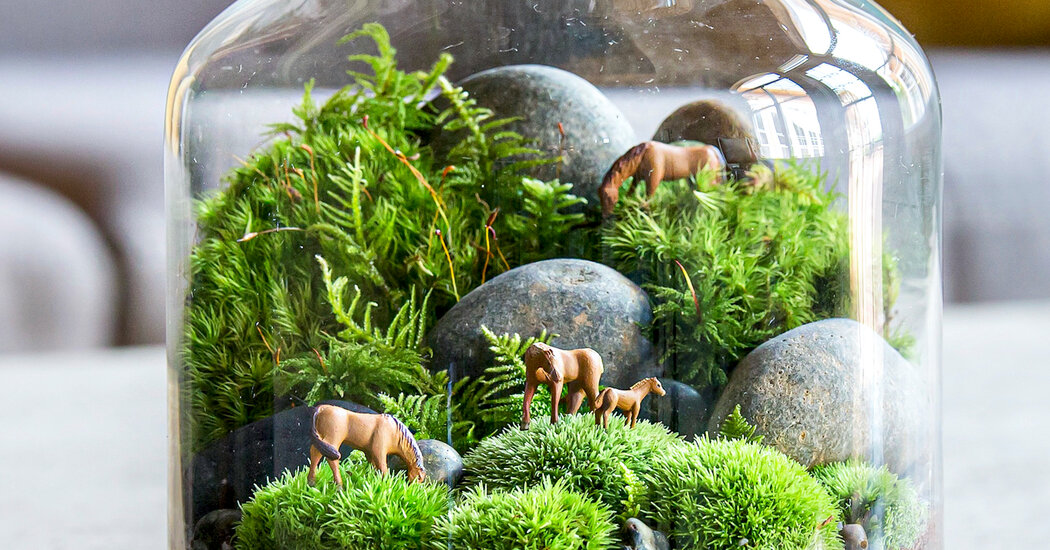 During the months when you can’t be outside working in the garden, what could be better than a miniature landscape that sits in your living room?

Just remember, as you put the finishing touches on your first terrarium and celebrate by cuing the chorus of “It’s a Small World (After All)”: This is a tiny garden, not a scaled-down theme-park installation where the scene is picture-perfect, day after day.

“It’s not a diorama, and these are not plastic plants,” said Patricia Buzo, a terrarium designer who owns Doodle Bird Terrariums, in the suburbs of St. Paul, Minn. Mrs. Buzo’s terrariums are living gardens that she plants with narrow tongs and then prunes with shears more appropriately sized for manicures than hedge trimming.

The same rules that apply to tending your garden outside also apply here: Choose the right plants and put them in the right place. Or else.

common houseplants,” Mrs. Buzo said. “The best choices don’t tolerate the conditions out in the house, but really need that high humidity.”

Green Terrariums and the author of “Terrariums: Gardens Under Glass,” agreed. “Let’s not just plop some plants in a jar,” she said. “I wouldn’t put palms in a forest scene.”

Apart from the visual incongruity, there’s a bigger problem: Tropical plants and temperate woodland types won’t cohabit happily, said Ms. Colletti, who began making terrariums around 2006, when she was the shop manager at the New York Botanical Garden, and now teaches how-to workshops.

ferns: Although they might seem like obvious terrarium subjects, many get too tall for terrarium containers. Besides the fern moss, another appropriately sized look-alike that Mrs. Buzo uses is a fern ally called spike moss (Selaginella), which despite its common name is not a moss.

California Carnivores, a specialty mail-order nursery in Sebastopol, Calif., recommends starting with one kind of plant before you try mixing genera in a design. Carnivorous plants like to grow lean, so be sure any medium you use does not contain fertilizer.

A Way to Garden and a book of the same name.

Many property purchasers in Alaska possess the same vision: Either hunker down away from the madding crowds in a refined log cabin or operate a … END_OF_DOCUMENT_TOKEN_TO_BE_REPLACED