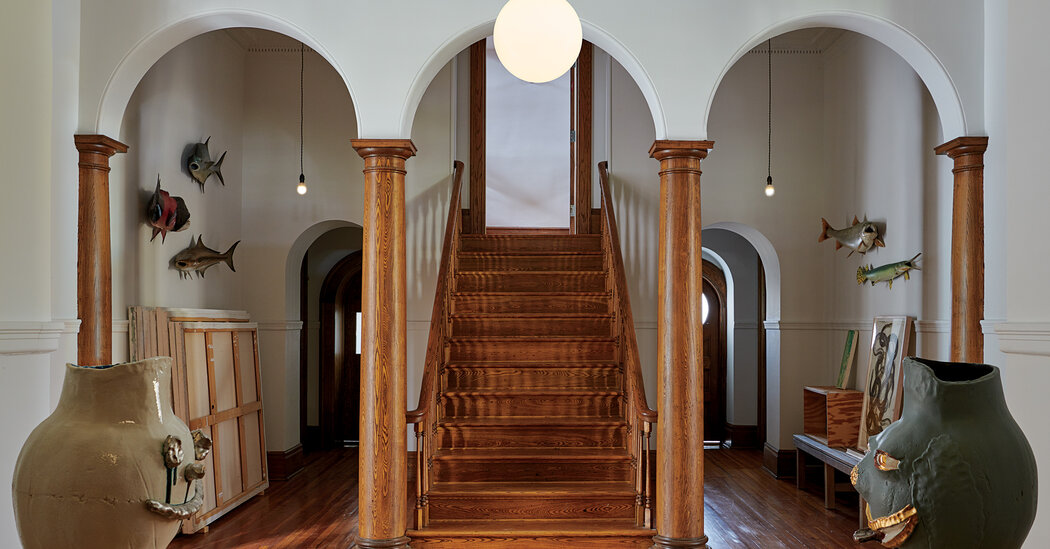 DAN McCARTHY HAD just become the resident of a stately Victorian schoolhouse at the foot of the Catskill Mountains when he realized that a building, like a person, lives multiple lives. In 2014, when he was 52 and in what he refers to as “the end of act two,” the artist packed up his apartment of nearly 30 years in Williamsburg, Brooklyn, and set out for a new life a few hours north of Manhattan in a three-story, Romanesque stone structure with an impressive Dutch gable and panoramic views of the Hudson Valley. The move, though overwhelming, brought immediate relief. Ceramics had given McCarthy’s career a welcome jolt — two months before he left the city, Anton Kern, his gallerist at the time, had shown a series of his expressive clay vessel Facepots — but sales for his crudely rendered oil paintings weren’t what they had been in the 1990s; what he fantasized about most was escaping New York’s market-driven art scene.

Ugo Rondinone and a daybed inspired by Donald Judd and fabricated with marine-grade fir plywood add to the space’s meditative mood. “I moved to New York to become famous,” he says. “But at a certain point, I realized that the greatest thing would be freedom. … Disconnecting from the city was about disconnecting from who I was there.” (Tellingly, one of his home’s only reminders of New York — framed strips of photo booth self-portraits by Andy Warhol, torn from an auction catalog — are down in the basement with his two kilns.)

Steven Kretchmer acquired it in the 1990s. Kretchmer replaced the arched windows and pivoting portholes, many of which had been smashed by vandals; installed new red oak floors; and restored the chalkboards that wrap around the dining room and punctuate the second-floor living room. He also preserved the heavy wooden doors that open from those common areas onto a grand hall, the echoing heart of the house, with a cathedral ceiling stained dark auburn that extends beyond the original cornice to a height of 26 feet.

Paula Greif; on a rubber-topped dining table with sawhorse legs that McCarthy constructed out of a solid-core door, elemental wheel-thrown vessels by a hero of his, the American potter Robert Turner. Almost everything in McCarthy’s home once belonged to someone else — or was once something else entirely —  and that’s the point: In all of it, there’s the promise of renewal, from the ornate mosaic urn made from broken teacups by the New York-based artist Joan Bankemper to the mismatched chairs he picked up at sidewalk sales and antique shops in Hudson that now surround his dining table.

McCarthy paints on the ground floor. (He sleeps on the second floor, one story up, but keeps a small, monastic bedroom next to his studio for when he works late into the night.) In a way, his workshop serves as a memorial to his idyllic, sun-kissed first act, the souvenirs of which he’s preserved. Taxidermy fish that he found online decorate the space, reminding him of his time working on fishing boats as a teenager in the late ’70s. In an eastern-facing room, where the morning light washes his art with a rosy glow, acrylic paintings stretched onto half-moon canvases resemble psychedelic rainbows, many of them with simple phrases evocative of people and places from his youth: “the Damned” (a band), “the Starwood” (a rock venue) and “Infinity Surfboards” (a shop). “These were the paintings I made when I first moved here,” he says. “Maybe it was a way to reach back to a time when I felt comfortable and safe.” Against the opposite wall are 18 of his newest paintings, which he spent the past two years finishing. On those canvases, people dance naked, their arms outstretched in fits of ecstasy, oblivious to the rainbows flowing directly into their heads.

As he reaches the bottom of the stairs leading into a whitewashed basement, he pauses in front of a monumental display of beaming Facepots, ranging in height from 18 to 22 inches: row upon row of creations that appear alternately, and somehow all at once, dopey, surprised, malevolent, sarcastic, sanguine, joyful and downright deranged. They feel, he says, however we want them to feel, or maybe how we’re feeling ourselves. “The mood varies from pot to pot,” he says over the clanking of the boiler. “They go out into the world, and they occur to people in different ways. We’re the ones who make them ours and fill them with meaning. They’re just vessels, after all.” The same, of course, can be said for the rooms that surround us.

AUSTIN, Texas--(BUSINESS WIRE)--As the first multifamily management company to be recognized in the Public Relations and Marketing Excellence Awards, … END_OF_DOCUMENT_TOKEN_TO_BE_REPLACED

There have been whispers of cooling housing and rental prices in the San Francisco Bay Area, but that hasn't yet translated into practical, noticeable … END_OF_DOCUMENT_TOKEN_TO_BE_REPLACED

Cars pass in Independence Square at twilight in Kyiv, Ukraine, Monday, Oct. 31, 2022. Rolling ... [+] blackouts are increasing across Ukraine as the … END_OF_DOCUMENT_TOKEN_TO_BE_REPLACED