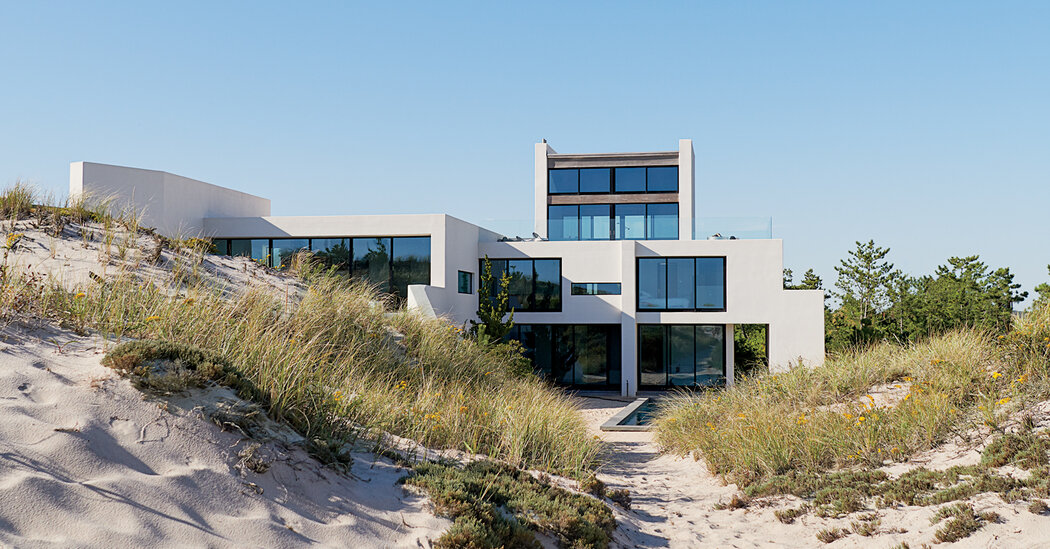 AS YOU TURN ONTO Southampton’s Meadow Lane, the green bulwark of privet hedge — a signature of this moneyed enclave — gives way to dune grass, seaside goldenrod and skeletal pines. The five-mile-long finger of land between the Atlantic Ocean and sleepy Shinnecock Bay may be the most prized strip of real estate in the nation, so there is construction everywhere: A new billionaire moves in, tears down the last billionaire’s palace and begins work on yet another Ozymandias. Still, tucked amid these dunes are a handful of modest architectural triumphs, built during a brief gust of Modernism that swept through the area in the mid-20th century. One of them, known as the Sugarman House, a hyperminimalist 1963 concrete shrine of jutting rectangles — part sand castle, part bachelor’s lair — serves as a case study of the work of the underrecognized American designer Ward Bennett.

The largely self-taught Bennett, who died at age 85 in 2003, was not a licensed architect, and built just a handful of houses in his multidisciplinary five-decade career. He is better recognized for the office furniture that defined the aesthetic of 1950s- and ’60s-era glass-and-steel skyscrapers, including the Landmark, a pared-down reimagining of an English side chair, and the Scissor, which evokes a 19th-century folding beach lounge, but he also created everything from textiles and flatware to Tiffany glasses. Still, it may be his interiors and the homes he designed from the ground up, such as the Sugarman House, that best convey the totality of his aesthetic.

David Rockefeller, who had him design the 1961 corporate offices of Chase Manhattan Bank, with boxy, oat-colored upholstered seating and low-slung floating shelves. Nearly a decade later, the Fiat president Giovanni Agnelli and his wife, Marella, commissioned Bennett to work with the architect Philip Johnson to transform their Rome apartment into a loftlike expanse featuring objects and materials that traditionally had been relegated to the garden: wicker, hammocks, coco matting.

Le Corbusier and the Finnish Alvar Aalto, were driven by philosophy, religion or social constructs, Bennett’s pared-down, human-scale Modernism was shaped by his own peripatetic life. Born Howard Bernstein in the Washington Heights neighborhood of Manhattan to a father who was a vaudeville actor, Bennett left home at 13 and supported himself pushing delivery carts through the garment district, eventually landing a job sketching women’s clothes. During a stint in Europe in his 20s, he sought out a meeting with the sculptor Constantin Brancusi, who became a lodestar. Back in New York, Bennett dressed windows and designed furs for the fashion designer Hattie Carnegie, shared a studio with the artist Louise Nevelson, took night classes taught by the German-born Abstract Expressionist Hans Hofmann and experimented with ceramics and jewelry. (Bennett’s jewelry was included in a 1946 group show at the Museum of Modern Art.)

By the late ’40s, he had become a sought-after interior decorator, as well a skillful furniture maker (his gently curved University chairs are found throughout the Lyndon Baines Johnson Presidential library in Austin, Texas). But it was in Bennett’s interiors that you saw the designer at his most innovative. In 1962, he bought an apartment at the top of the Dakota on Central Park West, a warren of maid’s quarters beneath the severely raked mansard roof; he opened the space entirely, with vertiginously sloping walls of windows, a daring choice in an era before lofts became popular. The retreat he created for himself a few years later in Springs, N.Y., a wooded bohemian area of East Hampton that attracted artists including Willem de Kooning, also incorporated then-novel design idioms, with a 20-foot-square peaked skylight and a pair of floor-to-ceiling, accordionlike redwood doors that opened to the sea.

BUT IT WASN’T UNTIL Marvin Sugarman, the producer of the landmark children’s show “Captain Kangaroo,” and his wife, Ronnie, commissioned a beach house, that Bennett was able to fully realize his extreme vision. Although he was a notoriously prickly character who usually worked alone, the project was ambitious enough for him to hire as an assistant the 22-year-old Joe D’Urso, who would later become the progenitor of High Tech, an industrial style synonymous with the early 1980s.

Luis Barragán, one of Bennett’s idols, becomes apparent. The walls are unbroken except for deep-set windows, and the materials are limited to teak, stone tile and plaster. Like Barragán, Bennett adopted an almost pious visual austerity in which natural light and shadow, not furniture or decoration, define the milieu. But unlike Barragán, Bennett opted for monochromatic embellishments: Inside, there are ebony orbital glass doorknobs, barely-there track lighting and a black metal spiral staircase that leads to a private third-floor eagle’s nest-like room. “Ward was involved with every element,” says D’Urso, now 77. “Most architects don’t care about interiors. Ward cared about everything from the furniture to the sheets and towels. He thought the placement of light switches was as important as the windows.”

The house has passed through several owners since the Sugarmans sold it in 1978. Its current owners, longtime admirers of Bennett, bought the property in 2012 and spent three years restoring it, even stripping the lacquered-over millwork to its original matte grain. One of the few major alterations they made was annexing and covering a deck to expand the tiny galley kitchen that was typical of Bennett’s houses — he considered cooking an afterthought. Previous owners had enclosed the ground level with glass (it now contains an extra bedroom and a den, bringing the total living space to 7,000 square feet) and installed a rectangular pool. Works by Richard Prince, Ed Ruscha and Cy Twombly hang on the off-white walls of the main level, and several Bennett pieces, including a Sled chair, with its X steel base and wicker seat, are scattered about. (Geiger, a subsidiary of Herman Miller, still produces several of his chairs, which are deceptively comfortable; Bennett had back problems, so he engineered them with great sensitivity to pitch and angle.) There’s also an oblong steel dining room table designed in the 1970s by D’Urso that the owners found in a local antiques store.

Edwina von Gal, who created gardens nearby for the fashion designer Calvin Klein, the cookbook author Ina Garten and the artist Cindy Sherman, largely relied on native species when she reimagined the home’s surroundings — mostly hardy pines and grasses, dune thrivers that can get a toehold in the unstable terrain. A Hollywood juniper, with its twisted, irregular boughs, stands sculpturelike by the pool. “I tried to make the landscape look like it’s always been there,” says von Gal. “The house is particularly conducive to that because it looks like it floated down from the sky.”

A few years after Bennett finished the Sugarman abode, he completed a much grander Hamptons house, his last in the area, for a stockbroker named Hale Allen in Amagansett. That fortresslike concrete edifice would become better known — Jann Wenner, the co-founder of Rolling Stone, and his then-wife, Jane, bought it in 1990 and hired the 72-year-old Bennett to restore it, adding a pool house, elaborate grid walls and Asian antiques. Still, it is the house on Meadow Lane that may be the designer’s most passionately austere creation. It stands as a subtle rebuke to contemporary excess and gaudiness, etched like salt spray on the sparse landscape: silent, transparent, elemental.

DALLAS — The rollback of abortion rights has been received by many American women with a sense of shock and fear, and warnings about an ominous … END_OF_DOCUMENT_TOKEN_TO_BE_REPLACED

The poshest place in California's Coachella Valley is The Madison Club. This exclusive gated community in La Quinta is where A-listers and tycoons … END_OF_DOCUMENT_TOKEN_TO_BE_REPLACED