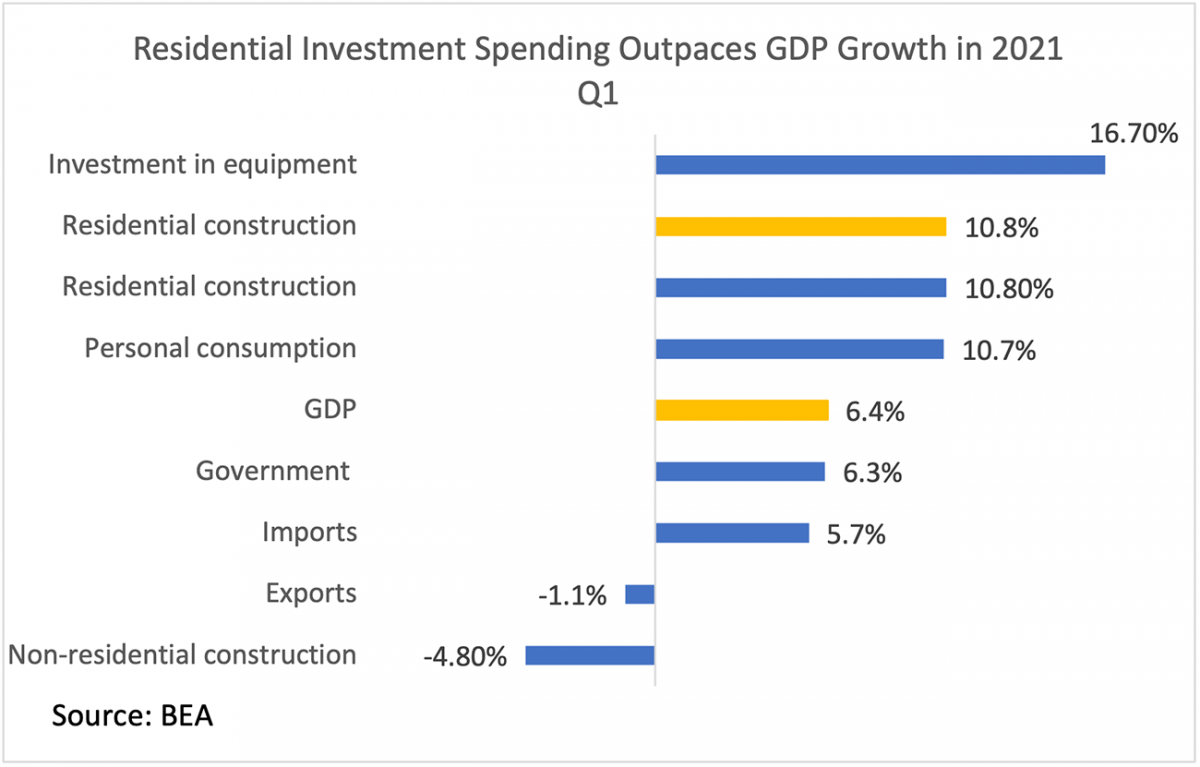 The economy is now back to its pre-pandemic level as the economy undergoes a strong expansion by an annualized rate of 6.4% in the first quarter.1 As in the past quarter, residential investment spending outpaced GDP growth. This economic recovery is quicker and stronger compared to the recovery post-2007-2009 recession, thanks to a quick and powerful dose of monetary expansion and strong fiscal spending that propped up consumer and residential investment spending. Investors are also bullish about the economy’s growth potential, as evidenced by the rise in investment for equipment/machinery.

Consumer spending, which accounts for 70% of the economy, expanded a robust 10.7% as consumers spent more heavily on durable goods ― motor vehicles, household equipment, and recreational goods― and also on non-durables like clothing, food and beverages. The  $2,000 fiscal stimulus checks, with $600 released in December, are likely fueling consumer spending as intended.

Residential construction rose a solid 10.8%, with housing starts steadily recovering to an annualized rate of 1.74 million in March. However, the sharp rise in lumber prices are acting as a big headwind, but the latest data on housing starts seems to indicate that the impact of rising lumber prices is on price, not the delivery of housing units.

However, non-residential construction continued to contract by 4.8% as offices continue to lose occupants and with half of food services and accommodation establishments still working at below their operating capacity from one year ago.

But businesses appear to be generally bullish about the economy’s prospects. Investment spending for equipment rose a hefty 17%, which speaks of strong business confidence in the coming months, with 70% of the population likely to be vaccinated by end of August 2021 at the current pace of 1.4 million a day.

Expect a continued strong housing market in 2021, with sustained economic growth and with mortgage rates hovering within the range of historic lows. The  economy should continue to expand with the stimulus from the $1.9 trillion COVID-19 relief bill and sustained monetary expansion with the Federal Reserve Board keeping the federal funds rate at 0 to 25 basis points; and the commitment to increasing its purchases of Treasury securities and mortgage-backed securities by at least $120 billion every month until the economy attains maximum employment. That is likely going to happen through the end of 2022 with the unemployment rate declining sluggishly since the fourth quarter of 2020 to 6.2% and with 9.7 million people still unemployed.

1 Released by the Bureau of Economic Analysis. The first estimate will be revised two more times but those have typically been marginal revisions.

When it comes it Hamas’s military capabilities, much of the focus has been on the labyrinthine tunnels it uses to launch attacks against Israel or the … END_OF_DOCUMENT_TOKEN_TO_BE_REPLACED

Joel Greenberg, the former confidant of Representative Matt Gaetz, pleaded guilty on Monday in federal court in Orlando to a range of charges, … END_OF_DOCUMENT_TOKEN_TO_BE_REPLACED