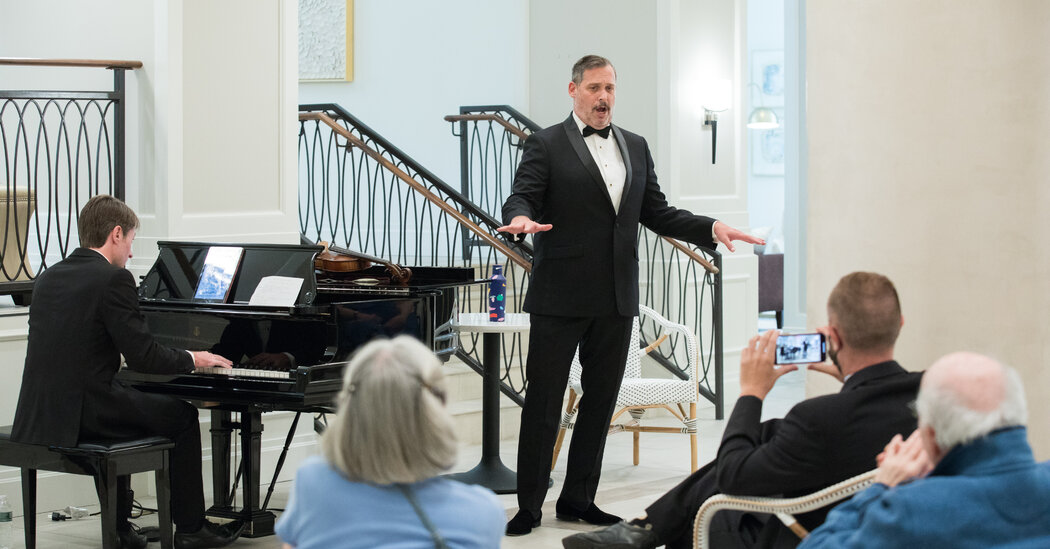 Then about an hour and a half later, Ms. Eckfeldt found herself enjoying a concert in the building lobby by Peter Kendall Clark, an opera singer who gave outdoor concerts in Brooklyn Heights during the pandemic.

Three decades ago, senior living facilities were places for older Americans to just get health care, according to David Freshwater, chairman of Watermark Retirement Communities. Now, with many studies on aging concluding that mental engagement leads to better health (and vice versa), seniors want to participate in stimulating programming, he said.

Some of the program directors at the residences are artists themselves and have invited personal friends and professional colleagues to teach classes. Ms. Glandon is a former professional dancer. Not only did she bring in Mr. Amodeo, her longtime friend and collaborator, to teach classes at Brookdale, but she also has taught her own intergenerational dance and art program, which included a dance flash mob in Union Square.

Aaron Feinstein, the director of people, arts, and culture at the Watermark, is a former theater director and musician. He has asked a college friend, Marielle Heller, who is a writer, actor, and director, to come and watch her films with residents and hold a question-and-answer session afterward.

“There’s a level of sophistication to our classes, simply because we’re in New York, the greatest cultural center of our country,” he said.

Mr. Feinstein often sits down at the Steinway piano in the lobby to play whatever comes to mind. And yes, he does take requests.

Whether you optimistically hope that mortgage rates will decline or are resigned that rates will stay elevated above the historic lows of 2021, you … END_OF_DOCUMENT_TOKEN_TO_BE_REPLACED