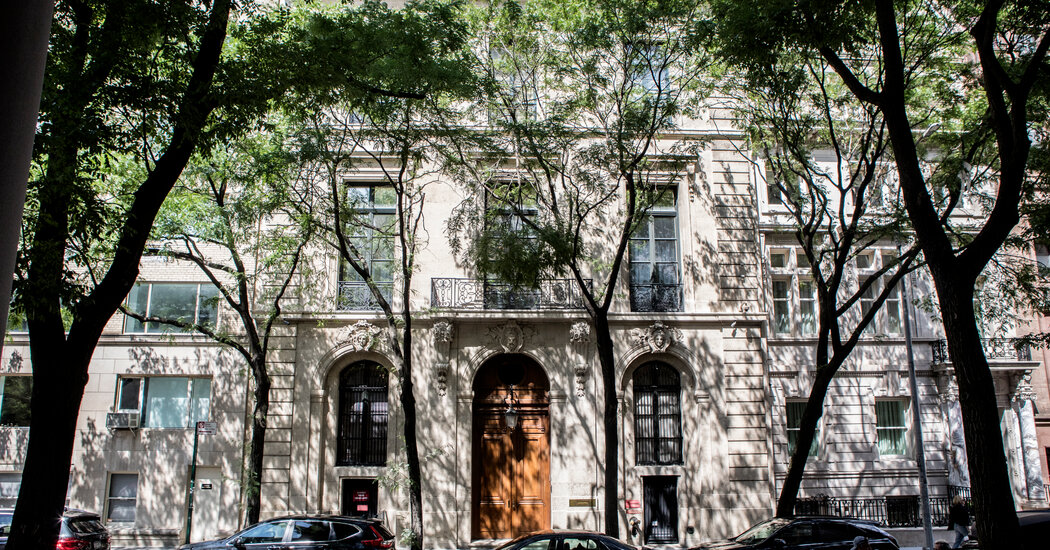 “Their goal is to spend more and more time in New York,” he added. “They’re confident that New York is going to come back from its current challenges stronger than ever.”

Mr. Daffey, an early investor in Bitcoins, had worked for Goldman Sachs since 1994. His retirement this month was disclosed in February.

The neo-French Classic mansion sits between Madison and Fifth Avenues in the Lenox Hill neighborhood, a short walk from Central Park. The building, 50 feet wide and seven stories high, has around 28,000 square feet of interior space that includes 10 bedrooms, 15 bathrooms and a two-story reception area.

The structure was designed in the early 1930s by the architect Horace Trumbauer for Herbert N. Straus, an heir to the Macy’s fortune, but Straus died before it was completed. It later became part of St. Clare Hospital, then housed the private Birch Wathen School.

In 1989, Mr. Epstein’s mentor, Leslie H. Wexner, the founder of L Brands, the parent company of Victoria’s Secret and Bath & Body Works, bought the building from Birch Wathen for around $13.2 million and converted it into a private residence after extensive renovations. At the time, it was the highest recorded price for a townhouse.

Mr. Wexner never moved in, but Mr. Epstein did. In a 1996 interview, he said, “Les never spent more than two months there.” Public records show that in 2011, a deed to the property was transferred to Mr. Epstein’s Virgin Islands-based company, Maple Inc.

Mr. Epstein, a billionaire financier, was charged with running a sex-trafficking operation that lured dozens of underage girls to the mansion, as well as his home in Palm Beach, Fla. Funds from the mansion sale were expected to be transferred to a compensation program for the victims.

The poshest place in California's Coachella Valley is The Madison Club. This exclusive gated community in La Quinta is where A-listers and tycoons … END_OF_DOCUMENT_TOKEN_TO_BE_REPLACED

KOROPY, Ukraine — Four men tugged at long strips of fabric to lift a coffin out of the gaping hole in the backyard of a small house. They flung the … END_OF_DOCUMENT_TOKEN_TO_BE_REPLACED