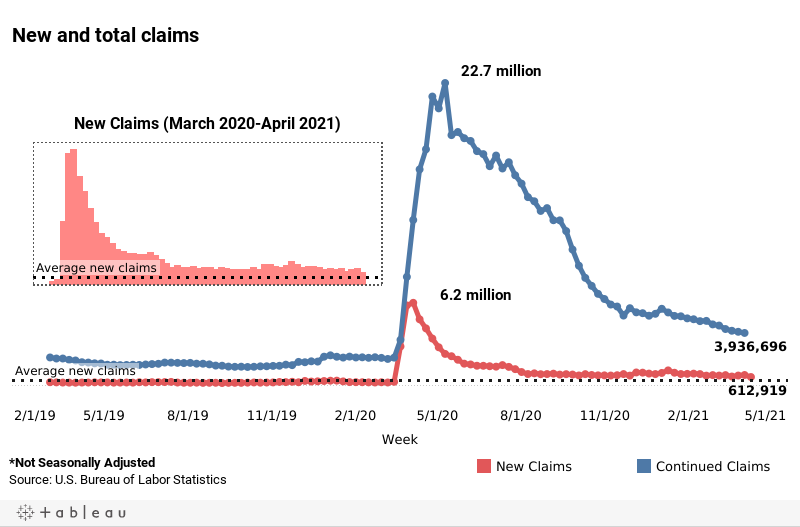 Jobless claims dropped last week to the lowest level since the onset of the pandemic. The number of Americans applying for new jobless claims fell by 152,833 last week to 612,919. There is no doubt that employment is gaining momentum. However, layoffs are still happening and are significantly elevated compared to pre-pandemic. At the state level, the number of layoffs is more than 6 times higher than pre-pandemic in Oklahoma, New Mexico, the District of Columbia, and Georgia.

The National Association of REALTORS® closely monitors the weekly claims for unemployment insurance provided by the Bureau of Labor Statistics. Since this data is also released for each state, we track the jobless claims activity at the state level. This state-level data report is a very important indicator to watch at economic turning points because it provides detail on what’s happening week by week, rather than each month or quarter.

Twenty-two states reported a decrease in new claims for the week ending April 10. Taking a closer look at the percentage change of the last week’s new claims with the new claims of the previous week, Virginia (-81%) had the largest drop in layoffs followed by Kentucky (-72%) and California (-52%). However, unadjusted new claims rose in North Dakota, Minnesota and Alabama. Particularly, compared to the previous week, initial claims increased by 169% in North Dakota; 84% in Minnesota; 68% in Alabama.

Here are the top 10 states with the highest increase/decline in jobless claims compared to the previous week:

Moreover, the current release provides information about people filing new and total Pandemic Unemployment Assistance (PUA). Specifically, the PUA is for the self-employed and others who do not qualify for the regular state unemployment programs. Among 50 states, nearly 7.0 million people received benefits in the week ending March 27 using the federal government’s PUA program. Since this data runs two weeks behind the claims estimates, expect fewer people to receive PUA in coming weeks. New York, Michigan and New Jersey had the most people receiving PUA benefits. Specifically, 13% of the labor force in New York received PUA benefits in the week ending March 27 followed by Michigan (10%) and New Jersey (8%).

Finally, after exhausting the 26 weeks of regular benefits that states typically provide to their residents, people are able to apply for longer-term unemployment benefits (up to 24 additional weeks) with the Pandemic Emergency Unemployment Compensation (PEUC). Nearly 5.2 million Americans received PEUC benefits in the week ending March 27. New Mexico, Michigan, and Hawaii were the states with the highest increase of people receiving PEUC benefits compared to the previous week. However, fewer people applied for longer-term benefits in Kansas (-33%), California (-32%), and Texas (-23%) during the same period.

The map below shows the percentage change of layoffs for each state. Click on a state to see how many layoffs occurred every week within the last year.

HANOVER, N.H. — Sirey Zhang, a first-year student at Dartmouth’s Geisel School of Medicine, was on spring break in March when he received an email … END_OF_DOCUMENT_TOKEN_TO_BE_REPLACED

VLACHOVICE-VRBETICE, Czech Republic — For nearly a century, local residents have wondered at the strange comings and goings at a sealed-off camp … END_OF_DOCUMENT_TOKEN_TO_BE_REPLACED

That’s changing. The Biden administration and its allies are pushing the notion that caring for children — and the sick and the elderly — is just as … END_OF_DOCUMENT_TOKEN_TO_BE_REPLACED