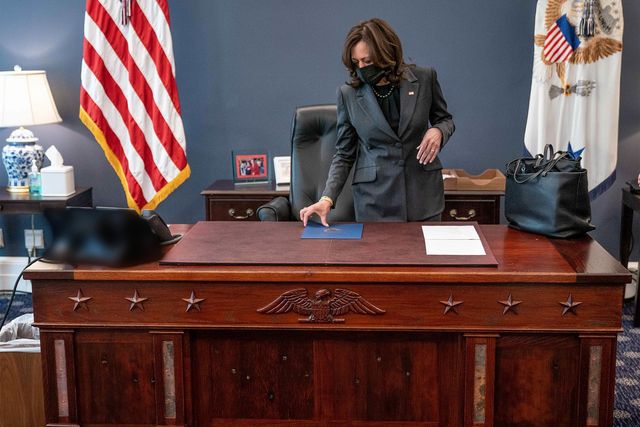 When new U.S. presidents are sworn in, one of their first jobs is to select from among a half-dozen famous desks to install in the Oval Office. But the second-in-command has never had such a lofty tradition—until now.

Kamala Harris, our nation’s first female and woman of color vice president, is finally getting a historic piece worthy of her status.

As we know, Joe Biden ultimately selected the Resolute desk, which was made out of old wood that came from a British Royal Navy ship called the HMS Resolute. And now, Harris has become the proud recipient of her own Resolute-style desk that we dare say may look as good as, if not better, than Biden’s!

Here’s more about Harris’ new desk, and how it speaks to something that many of us are craving more of in our home decor today.

Like Biden’s desk, the new vice president’s workspace was also made from reclaimed wood. This time, it came from a U.S. warship called the USS Constitution, which was built in 1794 and is currently moored at the Charlestown Navy Yard in Boston. The desk pieces were taken from Constitution castoffs during two recent restorations, which took place between 2007 and 2017.

In addition to Harris’ desk, a second desk was made this year, also with parts from the Constitution. This one was gifted, fittingly, to the office of the secretary of the Navy, a post that’s currently held by Thomas Harker in an acting capacity.

Both desks were built by the U.S. Navy Seabees, a group that builds and maintains U.S. military bases around the world.

To add even more history to these pieces, materials were also lifted from several other ships, among them the USS Chesapeake and the USS Arizona, which was sunk during the Pearl Harbor attack in 1941.

According to the Navy, it took the Seabees crew just seven weeks to put these desks together, which included detailed carvings of eagles and stars as well as several staining and finishing coats. But it’s the materials (think copper, nails, bolts, and steel plating) that came from the original ships that truly make these desks one of a kind.

“The ships built before the mid-1800s were made with hand tools, and the nails and hinges were hand-forged or cast,” says interior designer Beverly Solomon. “This required some of the greatest carpentry skills imaginable.”

Why building furniture from old materials is a big trend today

While repurposing old ship parts as new desks may not be the easy way to create a workspace, this trend is gaining steam lately because people are craving one-of-a-kind pieces with a sense of history.

Design Dudes. “And [Harris’] desk is a great example of that.”

And while wood from ships may not be plentiful, it’s particularly coveted since water acts to preserve the wood.

“Wood will last virtually forever if kept perfectly dry or if submerged,” Solomon explains. “What destroys it is going back and forth from wet to dry.”

In fact, Solomon adds, some people make a living dredging sunken wood from rivers and other bodies of water because it’s still usable.

Ships aside, many types of old wood are in high demand today.

“Wood is expensive, and boards made from black walnut, tiger oak, and burled maple bring a premium,” Solomon says, adding that she and her husband have salvaged a number of antiques made from precious woods, upcycling various parts to build new pieces.

Some fans, rather than pay through the nose for these historic pieces, are taking the DIY route, salvaging and restoring their own furnishings.

“Lately, people are enjoying woodworking as a hobby, so restoring old furniture is more popular than ever,” says Solomon.

So while you probably can’t score a desk made by the Seabees out of centuries-old timber, you can certainly find your own piece of history to furnish your own work-from-home space or beyond.

The post Kamala Harris Has a New Desk—and It May Be Better Than Joe Biden’s appeared first on Real Estate News & Insights | realtor.com®.

streamed live on a U.N. website.The American ambassador, Linda Thomas-Greenfield, said in a statement posted on Twitter after the meeting was … END_OF_DOCUMENT_TOKEN_TO_BE_REPLACED

As the worst violence in years rages between the Israeli military and Hamas, each night the sky is lit up by a barrage of missiles streaking across … END_OF_DOCUMENT_TOKEN_TO_BE_REPLACED