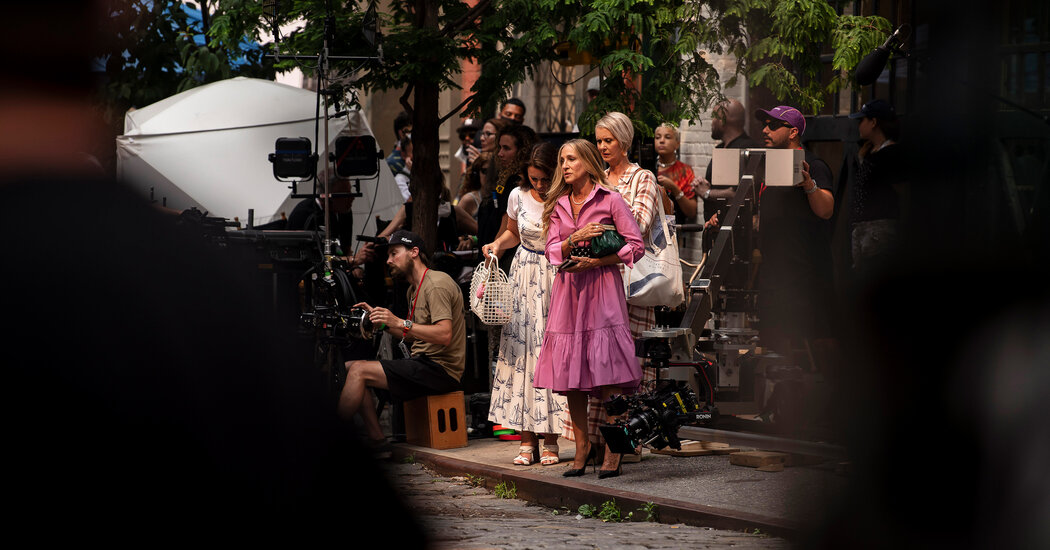 Ashley Psirogianes, a 26-year-old who works in fashion marketing, is a big “Sex and the City” fan. “I’ve been watching it a lot during lockdown,” she said. “I rewatched all the old episodes.”

So on a Tuesday morning in July, during an ordinary coffee run to Starbucks, she was surprised, thrilled even, to run into the cast and crew making the reboot. The team of hundreds of people were taking over Crosby Street in between Prince and Spring.

No one was allowed on the street unless they lived there or had business dealings that day. A crowd had gathered to catch a glimpse of Kristin Davis, Cynthia Nixon, and Sarah Jessica Parker, and speculate over what was happening in the scene (Miranda’s hair is blonde! Was Charlotte not wearing her wedding ring?)

“I just walked around the corner, and there they were,” Ms. Psirogianes said. “I got a peek of them right before they went to lunch.”

“The Marvelous Mrs. Maisel,” about a Jewish housewife in the late 1950s who becomes a stand-up comedian, was filming season four on the streets of the West Village where she lives.

They were using the courtyard of Ms. Walker’s apartment building, on Bethune between Washington Street and West Street, for hair and makeup. For several days she watched actors going in and out of trailers, the women getting decked out in pencil skirts and pearls, and the men in vintage suits and fedoras. “It was so funny because they were all wearing these ’50s outfits with masks,” she said.

They filmed scenes in Abingdon Square, two blocks away, and nearby streets were filled with classic cars and vintage city buses. “Everyone was just hanging out and gushing over these old cars,” said Ms. Walter. “All the neighbors were there trying to catch glimpses of what they were filming.”

For Ms. Walter living in the middle of the action provided much needed fun. “At that point things were still closed down,” she said. “This was free entertainment on the street. It made me feel like New York City was alive again and coming back.”

Some New Yorkers have made a little money from the experience.

“I am one of the lucky ones,” said Nicholas Platt-Hepworth, 35, who works in finance. He lives on Commerce Street, on a quiet, picturesque corner of the West Village. This summer his street has been taken over by “A Journal for Jordan,” a movie based on a memoir written by Dana Canedy, a former New York Times journalist, and directed by Denzel Washington and starring Michael B. Jordan and Chante Adams. Then, almost as soon as they left, “The Marvelous Mrs. Maisel” team, which has been filming outdoors throughout the spring and summer, showed up to film in the same place.

A sample of the fantasti Filipino food at London's Kasa & Kin and Romulo CafeKasa & KinGrowing up between the UK and US, I found it extremely … END_OF_DOCUMENT_TOKEN_TO_BE_REPLACED