It was friends and the rising cost of rent that finally turned Matt Fong’s attention toward buying a home.

“I liked where I lived, and I tried to keep the rent a certain part of my income,” said the 32-year-old project manager for a Seattle ad agency. “Then I saw another friend buy a home and rent out rooms to make a profit. I thought, ‘If you can do that, I can at least start looking.’”

Fong’s rent had climbed to nearly $1,600 for a 1-bedroom apartment, which a quick look at the market told him was roughly what a condo would cost in the same hip neighborhood. Ultimately, he purchased a single-family home in a different part of town, to avoid condo fees and to get some yard space where he can tinker and restore furniture.

Fong is a millennial homeowner, which, it turns out, is not so rare today. New Zillow Group research shows that young adults are buying homes in sufficient numbers now and they are actually driving the housing market.

Half of home buyers are under age 36

“Millennials are shaping the market more than anyone realized. In fact, half of all buyers are under 36 and half of sellers are under 41,” said Zillow Chief Marketing Officer Jeremy Wacksman, referring to results from a survey of more than 13,000 homeowners, sellers, buyers and renters that are part of the new Zillow Group Consumer Housing Trends Report. 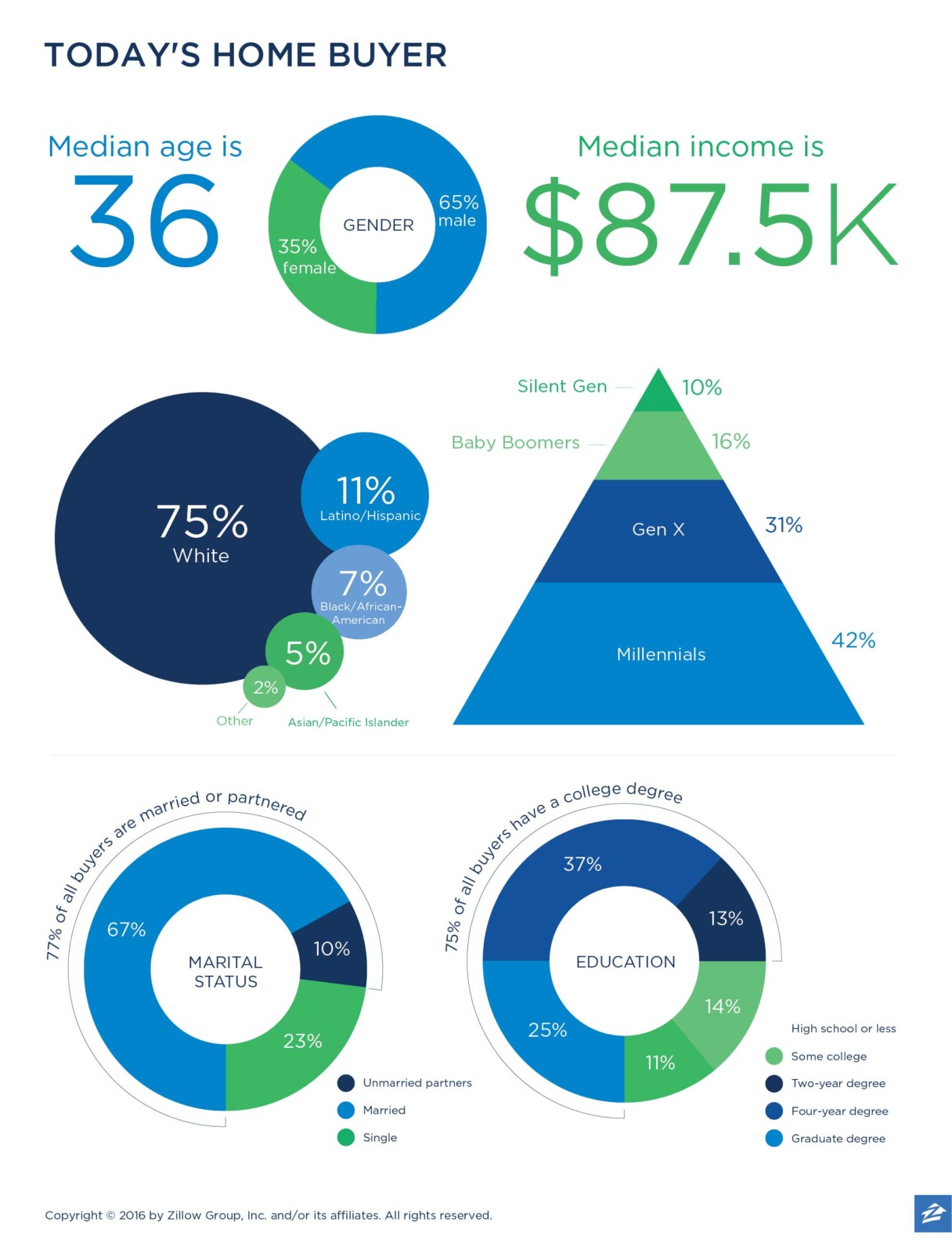 Nearly half of millennial homeowners live in the suburbs

Another surprise from the new report is that a large number of millennial homeowners – 47 percent – live in the suburbs.

We’ve seen millennials move to some suburbs that are tailor-made to suit their tastes and needs – for example, the neighborhood of Stapleton, which was built on the site of Denver’s old airport. But it wasn’t clear until now how many of them are putting down roots outside of cities.

One big reason for the popularity of suburbs is cost. As urban cores have soared in popularity, so have the price tags on urban homes. To afford bigger homes, and to find the shared amenities they like such as community gyms and pools, many millennials are willing to live farther out.

Their willingness to live in the suburbs, along with the fact that millennials waited longer to buy their first homes, may be part of the reason new Zillow research also reveals that today’s “starter” homes are almost as large as “move-up” homes and cost just 18 percent less.

Still, the stereotype of millennials as urban hipsters is not entirely dead: A third of millennial homeowners live in the urban core. No other generation has so many people living downtown.

Although millennials are jumping into the homeowner pool in greater numbers than previously believed, it is not without second thoughts. Two-thirds of millennial buyers consider renting at the same time they shop for a home — and one in three seriously consider it.

There’s no doubt that home buying is a major undertaking. Buyers spend 4.2 months on average shopping for a home, and 32 percent of them exceed their initial budget.

It’s become the norm for buyers to make more than one offer before they close on a purchase. Fong, in Seattle, is among the 24 percent of buyers who made three or more offers.

For him, the 13th try was the charm. He was making bids with 10 percent down and, Fong said, “constantly got bid out of the water.”

It’s hard to compete with couples making bids with larger down payments and dual incomes, he said.

Those financial considerations make sense to a lot of renters, almost 60 percent of whom make less than $50,000 a year. Home buyers, by comparison, make $87,500 on average.

“Depending on where they live, homeownership may be out of reach,” Wacksman said.

MIAMI--(BUSINESS WIRE)--Intelli Smart Homes, the leading smart home technology company, has been recognized as one of America’s fastest-growing … END_OF_DOCUMENT_TOKEN_TO_BE_REPLACED

Customers outside a Walmart store in Torrance, California, US, on Sunday, May 15, 2022. Walmart Inc. is scheduled to release earnings figures on May … END_OF_DOCUMENT_TOKEN_TO_BE_REPLACED

The past few years have been brutal on homebuyers' budgets. Would-be buyers have been priced out of some of the most desirable neighborhoods thanks to … END_OF_DOCUMENT_TOKEN_TO_BE_REPLACED