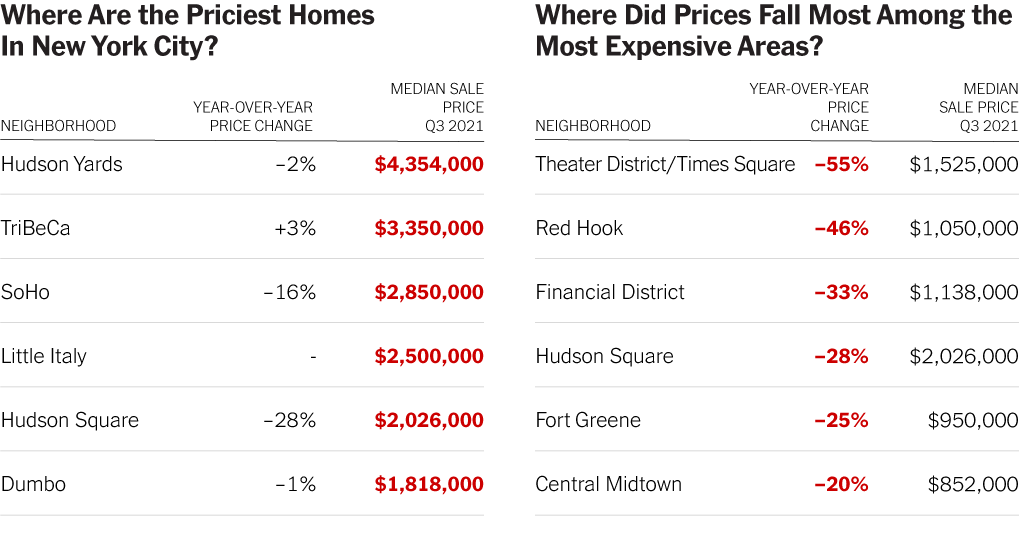 New York City’s real estate market was rich with signs of recovery in the third quarter of 2021. The city’s median sale price was up 16 percent from Q3 2020, to $755,000, and the number of sales increased 145 percent, according to an analysis by Property Shark. (By contrast, the report notes that prices were essentially flat from Q3 2019 to Q3 2020.)

The study also isolated the city’s most expensive neighborhoods, the subject of this week’s chart. In Manhattan, which experienced a greater pandemic slump than the other boroughs, the number of sales surged to a three-decade high, according to the most recent Elliman Report, and seven Manhattan neighborhoods landed among the 10 most expensive in the city, according to Property Shark’s analysis.

The analysis makes clear that increased sales activity doesn’t translate to higher prices everywhere. In fact, the opposite was often true in the most expensive areas. While median sale prices rose in 26 neighborhoods among those with the 50 highest median prices in the quarter (actually a list of 57 neighborhoods because of several ties), prices fell or were flat in 19. The rest didn’t have enough sales to accurately gauge price growth.

Battery Park City’s 134 percent increase in median price was by far the largest in the city. In Hudson Yards, the most expensive neighborhood, prices fell 2 percent, and in SoHo, which finished third, they were down 16 percent. The Theater District/Times Square neighborhood saw the steepest price drop, 55 percent.

This week’s chart shows New York City’s 10 most expensive neighborhoods as of Q3 2021, and the 10 that saw the largest year-over-year price decreases.

A sign stands outside an upscale home for sale in the Lake Pointe Subdivision of Austin, Texas.Ed Lallo | Bloomberg | Getty ImagesConsumer confidence … END_OF_DOCUMENT_TOKEN_TO_BE_REPLACED

A famous thatch-roof house designed by Earl Young captivated the web and racked up tens of thousands of clicks. Resembling a mushroom, the unusual … END_OF_DOCUMENT_TOKEN_TO_BE_REPLACED