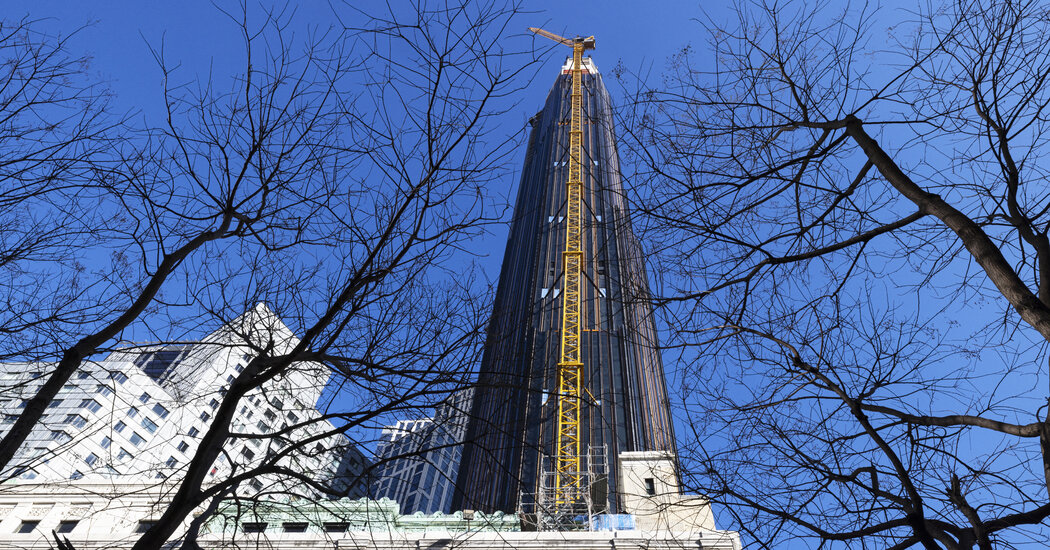 Near the top of the 1,066-foot Brooklyn Tower in Downtown Brooklyn, wind whipped across the unfinished concrete slab, and the developer, Michael Stern, showcased the stunning, sky-high views.

There was the shimmering New York harbor; the distant beaches of Queens; the mottled rooftops of low-rise Brooklyn; and the building’s closest spiritual kin: the supertall condos of Manhattan’s Billionaires’ Row.

But don’t expect a tour.

“The price of admission to the observation deck?” Mr. Stern deadpanned. “You’ve got to buy or rent a unit.”

After five years of construction, his firm, JDS Development Group, has nearly completed the city’s first and only supertall tower outside Manhattan — defined as exceeding 300 meters, or 984 feet. The next tallest tower in the borough, the nearby Brooklyn Point condo, is almost 350 feet shorter than the Brooklyn Tower — the difference of a Statue of Liberty, plus a few townhouses stacked on top.

complaints of serious construction defects last year at the nearly 1,400-foot tower at 432 Park Avenue on Billionaires’ Row may have fueled more hesitancy about their future.

tax breaks from the city. The income-restricted units, all but 19 of which will be studios or one-bedrooms, will be pegged to renters making 130 percent of the area median income.

connected to the landmark Dime Savings Bank, a palatial bank hall with 40-foot ceilings and a domed ceiling created by the famed Guastavino Fireproof Construction Company. With the purchase of the former bank’s unused development rights, the tower gained about 30 more floors than it could have otherwise built. The bank hall will become a “flagship” retail space, part of a 100,000-square-foot retail plan, Mr. Stern said.

The bank interior, with its hexagonal tiles and patterns, inspired the facade of the building, a mix of stainless steel and anodized aluminum in contrast to many of the blue-glass towers around it, said Gregg Pasquarelli, a founding principal at SHoP Architects.

Where the new tower connects to the roof of the bank, the building will have three outdoor pools surrounding the dome. There will be an array of amenities, including a movie theater, gym, billiards room, children’s playroom and — a late pandemic addition — co-working spaces and conference rooms for remote workers. Renters get access to all the amenities, except the 85th floor “sky lounge,” which is reserved for condo owners.

where residents are suing for at least $125 million after reports of intolerable noise, electrical explosions and burst pipes related to the construction of the building.

“I think we’ve learned all these lessons already,” he said.

AUSTIN, Texas--(BUSINESS WIRE)--As the first multifamily management company to be recognized in the Public Relations and Marketing Excellence Awards, … END_OF_DOCUMENT_TOKEN_TO_BE_REPLACED

There have been whispers of cooling housing and rental prices in the San Francisco Bay Area, but that hasn't yet translated into practical, noticeable … END_OF_DOCUMENT_TOKEN_TO_BE_REPLACED

Cars pass in Independence Square at twilight in Kyiv, Ukraine, Monday, Oct. 31, 2022. Rolling ... [+] blackouts are increasing across Ukraine as the … END_OF_DOCUMENT_TOKEN_TO_BE_REPLACED