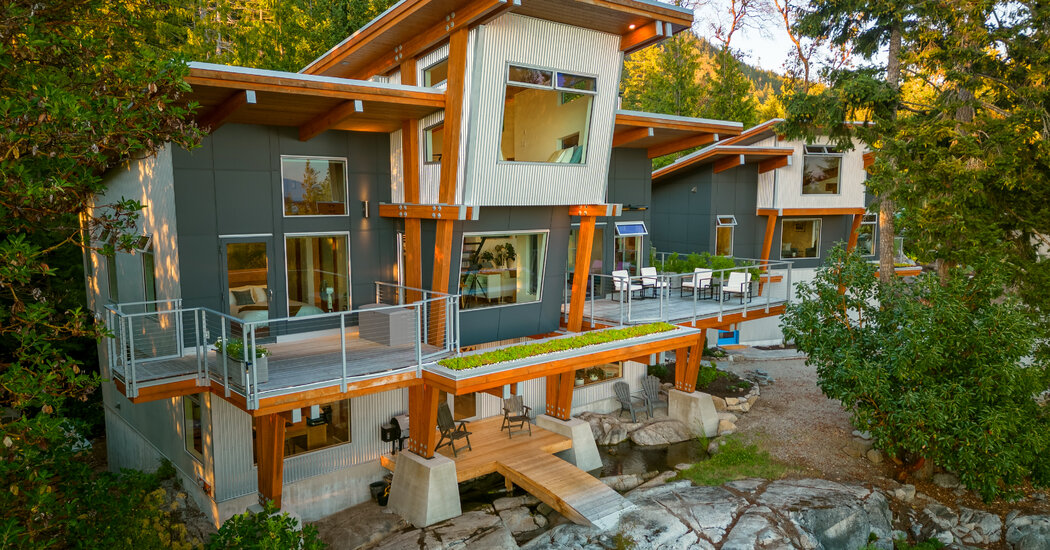 A Four-Bedroom on Five Acres Outside Vancouver

This four-bedroom, three-bath home sits on nearly five hilltop acres in Halfmoon Bay, a coastal village in British Columbia’s Sunshine Coast region, just west of Vancouver. The 4,300-square-foot house, completed in 2020, overlooks the Salish Sea and various islands in the Strait of Georgia.

The sellers, William and Shirley Van Esch, said that while readying the hilltop for construction, they discovered “a place where the rock dipped down, and we thought, hey, wouldn’t that make a nice wine cellar,” Mr. Van Esch said. They gave that instruction to their architect, along with a request for a top-floor kitchen, an elevator to the wine cellar, and a guesthouse connected to the main house by a breezeway.

They also preserved a small, natural pond on the property, building a ramp over it that leads to one of the home’s entrances. “Every spring we get this cacophony of frogs — we love it,” Mr. Van Esch said.

ferry terminal at the coast’s southern tip, in Langdale, is about a 50-minute drive from this property; the ferry ride to Vancouver’s Horseshoe Bay is 40 minutes. Float planes from Vancouver land in Sechelt.

The Sunshine Coast, nestled in the southwest corner of mainland British Columbia, stretches for 110 miles from Howe Sound up to Desolation Sound. The area includes the traditional territories of the Squamish, Sechelt, Sliammon and Klahoose nations, and has a population of roughly 50,000.

The region’s mountains, lakes, coastline and inlets make it a paradise for those seeking outdoor recreation. “It used to be Vancouver’s best-kept secret,” said Aliese MacKenzie, a sales agent with Re/Max City Realty. “About five years ago, we saw a real uptick in foreign buyers. That’s when prices started shooting up.”

The pandemic further enhanced the region’s desirability, as Vancouver residents “who were stuck in condos fled to bigger properties and the ability to have a home office,” said Sue Scott, a sales adviser with Engel & Völkers Vancouver.

market report from Re/Max Canada. That price — which makes the Sunshine Coast one of the more affordable regions in the Vancouver metro area — typically buys a 1,500-square-foot home with an ocean view in a more built-up location, like Sechelt, Ms. Stockwell said.

according to the government’s finance department. Temporary workers and international students are exempt from the ban.

Currently, foreign buyers in most areas of British Columbia must pay an additional 20 percent tax on home purchases. However, purchases on the Sunshine Coast are exempt from that tax, agents said.

“I’ve had buyers from California come up and purchase here specifically because there is no foreign buyers tax,” Ms. Scott said.

Buyers and sellers hire their own lawyer or notary to handle the transaction. Because the majority of properties on the Sunshine Coast are not connected to a municipal sewer, purchases require a septic system inspection, Ms. MacKenzie said.

AUSTIN, Texas--(BUSINESS WIRE)--As the first multifamily management company to be recognized in the Public Relations and Marketing Excellence Awards, … END_OF_DOCUMENT_TOKEN_TO_BE_REPLACED

There have been whispers of cooling housing and rental prices in the San Francisco Bay Area, but that hasn't yet translated into practical, noticeable … END_OF_DOCUMENT_TOKEN_TO_BE_REPLACED

Cars pass in Independence Square at twilight in Kyiv, Ukraine, Monday, Oct. 31, 2022. Rolling ... [+] blackouts are increasing across Ukraine as the … END_OF_DOCUMENT_TOKEN_TO_BE_REPLACED