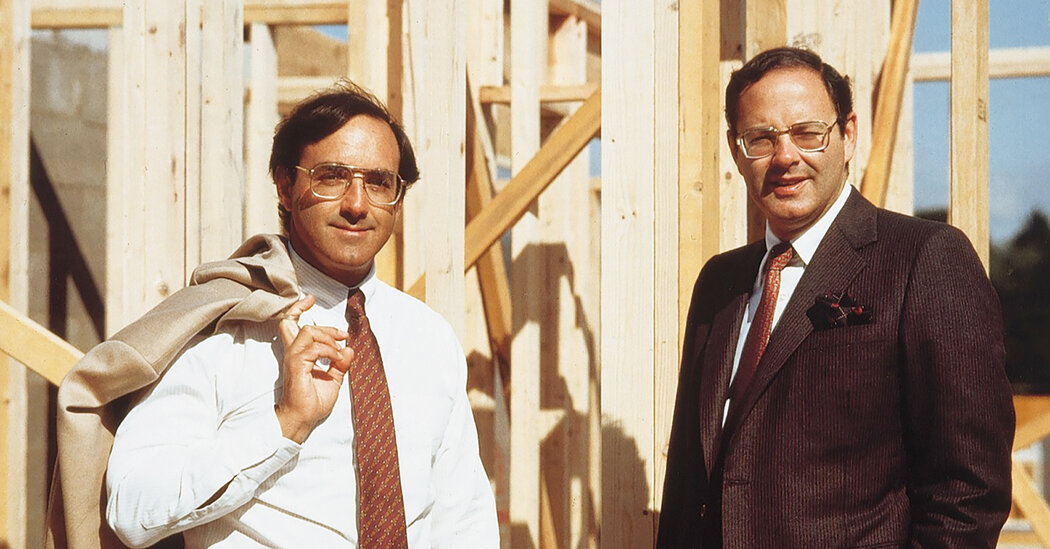 Robert Toll, who with his brother built an eponymous brand of luxury “McMansions” in the United States that became home to some 150,000 households, died on Friday at his home in Manhattan. He was 81.

The cause was Parkinson’s disease, his family said in a statement.

Mr. Toll, who grew up in a single-family Tudor-style home in suburban Philadelphia, initially pursued law as a career but quit after nine months. In 1967, he persuaded his father, a home builder, to give him two vacant properties on which he could construct colonial-style homes that were fully furnished and decorated.

“We built two houses,” Mr. Toll said. “Instead of selling them, we used them as samples for the lots we owned down the street.”

The company expanded from the Northeast to Washington, D.C., in the 1980s and then to California in the 1990s. It now operates in 24 states, developing suburban enclaves, communities for older adults and urban high-rise apartments for affluent homeowners.

chairman and chief executive of Toll Brothers from its founding until 2010; he remained on the board of directors until recently, when he was named chairman emeritus. He oversaw the legal aspects of the business while his younger brother, Bruce E. Toll, the vice chairman of the board, was responsible for the bookkeeping.

Robert Irwin Toll was born on Dec. 30, 1940, in Elkins Park, Pa., a Philadelphia suburb. He was raised in a house built by his father, Albert, a Ukrainian immigrant whose brother, Herman, became a Democratic congressman from Pennsylvania.

The New York Times in 2005. His father later became a successful home builder and commercial property developer. His mother, Sylvia (Steinberg) Toll, was a homemaker.

Bob Toll received a bachelor’s degree in political science from Cornell University in 1963. In 1966, fulfilling his parents’ dream, he graduated from the University of Pennsylvania’s law school. He loved law school, he said, but disliked practicing law.

One of his clients was his father, for whom he did some legal work on two lots that Albert Toll hoped to develop in Chester County, Pa. When Bob suggested developing the property on his own, his father balked. But his son conspired with Albert’s partner and Bruce Toll, who was just graduating from the University of Miami with a major in accounting, and his father relented.

In 2005, The Real Deal, a New York real estate magazine, asked Mr. Toll in an interview whether all of his homes at the time — including a farmhouse in Bucks County, Pa. — were McMansions. He replied: “No, not at all. The home in Bucks County has an eight-foot ceiling on the first floor. There’s no vaulted ceiling. It’s not a big home compared to many of the homes that we have built. I would guess that it’s under 5,000 square feet.”

Mr. Toll was a wide-ranging philanthropist. He was on the board of the Metropolitan Opera, and his company became the lead corporate sponsor of the Met’s International Radio Network after Chevron-Texaco stopped supporting live Saturday matinee radio broadcasts in 2005.

Mr. Toll and his wife started the Robert and Jane Toll Foundation, which pledged more than $50 million to the University of Pennsylvania’s law school to expand a program that supports students pursuing careers in public service and social justice. He also supported Seeds of Peace, a program born out of a summer camp he attended as a child in Otisfield, Maine; it brings together Arab, Israeli, Indian and Pakistani teenagers to promote peaceful conflict resolution.

Douglas C. Yearley Jr., the chief executive of Toll Brothers, said of Mr. Toll, “In so many ways, he is still with us, and Toll Brothers will always be his company because of what he taught us all.”

As a boss, Mr. Toll was lauded in the industry by a number of professional organizations. Not all of them, however, were aware of the pitchfork that he kept in his office and that he sometimes wielded during meetings to remind his company’s executives to proceed carefully in buying land or taking other risks.

“We didn’t want that pitchfork stuck in our rear end,” Mr. Yearley said.

AUSTIN, Texas--(BUSINESS WIRE)--As the first multifamily management company to be recognized in the Public Relations and Marketing Excellence Awards, … END_OF_DOCUMENT_TOKEN_TO_BE_REPLACED

There have been whispers of cooling housing and rental prices in the San Francisco Bay Area, but that hasn't yet translated into practical, noticeable … END_OF_DOCUMENT_TOKEN_TO_BE_REPLACED

Cars pass in Independence Square at twilight in Kyiv, Ukraine, Monday, Oct. 31, 2022. Rolling ... [+] blackouts are increasing across Ukraine as the … END_OF_DOCUMENT_TOKEN_TO_BE_REPLACED