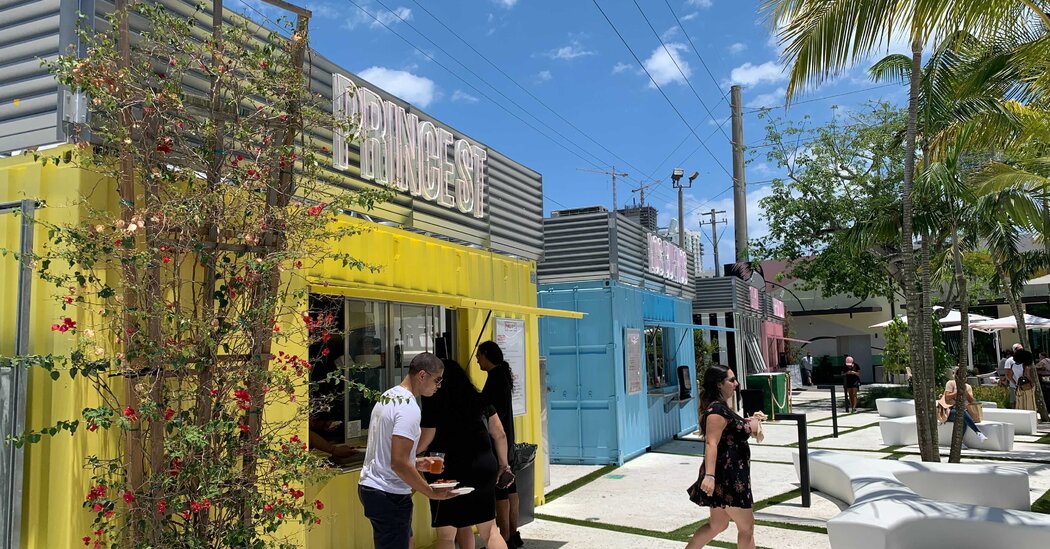 To drum up publicity for his downtown Indianapolis food hall, Craig Baker posted photos of orange, turquoise and hot pink shipping containers on Instagram. They might seem like an odd way to promote a food emporium and culinary incubator, but the steel boxes piqued locals’ curiosity.

“They’re very much like Legos, right?” Mr. Baker, an entrepreneur and a chef, said of the shipping containers inside the AMP, an artisan marketplace and a former utility garage where vendors will sell PB&J sandwiches, Ethiopian cold-brewed coffee and chocolate-covered strawberries coated in edible glitter.

“We’re building our own little village inside a giant garage,” he said of the 40,000-square-foot space, which also contains a full-service restaurant, an open-air bar, a community prep kitchen and a stage. “People want to see what you built.”

Shipping containers have been heralded as a trend in residential design, where they are used for modular homes, but they’re also winning over commercial planners who have used them to liven up the bars, cafes and restaurants within developments anchored by food halls. When used in industrial areas or port cities, the containers give the projects a sense of community, critical in a pandemic when retailers and restaurants are shutting their doors.

Downtown Container Park, a project conceived by Tony Hsieh, the Zappos chief executive, who died last November. The development, which was central to the $350 million revitalization of downtown Las Vegas, inspired other developers like Barney Santos, who will open BLVD MRKT this summer in the predominantly Latino neighborhood of Montebello after seven years of planning.

“I remember seeing the container park and feeling so inspired by the design,” Mr. Santos said of the Las Vegas development. “I wanted to recreate that experience in my neighborhood, to do something no one would expect to see.”

Developers like Mr. Santos said using shipping containers was a design choice rather than a cost-saving one. Used shipping containers cost $2,000 to $3,000, but builders can expect to pay five times that amount to add windows, doors, support structures, and kitchen and other equipment to pass local health inspections. That makes the cost comparable to installing regular food stalls.

For entrepreneurs, opening a food stall in a shipping container allows them to add flourishing touches to personalize their space. At many indoor food halls, stalls often look the same except for a few variations in signage. “The creativity that opens up is the most curious,” said Mr. Baker, the project lead for the AMP. “You’re giving them a canvas, and you say: ‘Look, here’s your space. What are you going to do with it?’”

That resonated with Joanna Wilson, owner of an AMP dessert shop, Punkin’s Pies. Ms. Wilson chose colors that matched her brand, adding black-and-white floors and awnings to the hot pink shipping container as well as a sparkly chandelier that shines like her glitter-covered strawberries.

The semi-enclosed space also allows her to tuck away most of her kitchen equipment. “I’m trying to make it look dainty and neat,” Ms. Wilson said. “I don’t like showing my refrigerator, microwave and the kitchen area.”

The design choice makes sense in major port cities like Long Beach, Calif., where the developer Howard CDM built SteelCraft, one of the earlier incarnations of a shipping container dining venue.

“There’s shipping containers everywhere” in Long Beach, said Kimberly Gros, the founder of SteelCraft, which manages two other Southern California locations, in Garden Grove and Bellflower. “So we thought we would create a structure that was different, that really connected to us.”

Reusing materials appeals to many consumers, both from an environmental and aesthetic standpoint. “I think when you take an item and subvert its original intent and create an entirely new use for that item, that’s always interesting,” said Erik Rutter, a co-founder of Carpe Real Estate Partners.

For indoor food halls like the AMP, bright hues liven up an otherwise gray space while maintaining an industrial feel. “The color palette for the containers really pops,” Mr. Baker said.

But there are a few caveats to using shipping containers in food-centric destinations. Some developers advise sticking to outdoor uses to avoid complex retrofitting. In an outdoor setting, oven ventilation can go straight from the oven hood through the roof, which is the most common setup. But for a food hall at the bottom of a 50-story building, the process becomes more complicated because the venting may have to go up 50 stories, said Mr. Weitz of Carpe.

Most developers have stuck to outdoor uses, but some food halls in the Midwest, such as the AMP, Detroit Shipping Company and Parlor Food Hall in Kansas City, Mo., have placed them indoors. Design experts say the key is to stick to bakeries and other light cooking uses indoors instead of, say, a shop that requires a deep fryer. That’s why the AMP used shipping containers for businesses with limited cooking requirements and conventional stalls for those that required more, said John Albrecht, a principal at the architecture firm DKGR, which designed the AMP.

Coping with the pandemic is also a bigger challenge for indoor food halls where guests often jockey for coveted seats. Most have pushed takeout and delivery services and have reconfigured their seating to enable social distancing, said Phil Colicchio, a co-leader of Cushman & Wakefield’s food and beverage consulting group.

But perhaps the biggest struggle for shipping container-led developments is staying relevant as more open. “The worry is that the more that go this route, the more the spaces start to look alike,” said Trip Schneck, also a co-leader of Cushman & Wakefield’s food and beverage group.

“Brilliant thinkers and creative minds will come up with other ways to make it interesting for people to come out and eat and drink and have a good time,” he said.

Listed on April 21 for $2,395,000 with Adam Weissman of Coldwell Banker Bain of Lake Union, the gorgeous four-bedroom brick home was sold on May 6 for … END_OF_DOCUMENT_TOKEN_TO_BE_REPLACED